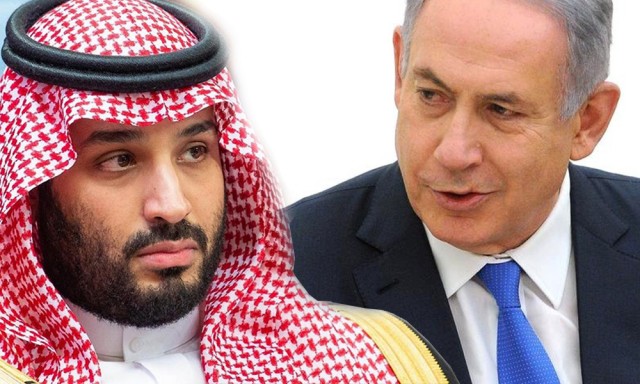 Israel appears to have presented an appealing package of economic incentives to draw the Saudi kingdom into its sphere of influence.

A decades-old strategy of “divide and conquer” and media warfare is resulting in unexpected and unproductive alliances across the Middle East.

Israel is attempting to seduce Saudi Arabia into normalization through various economic and ideological avenues. Chief among these are arms, economics, and media warfare, channeled into a divide and conquer strategy.

But Israel’s normalization of ties with the UAE in and of itself is also aiding its goals with Saudi Arabia. The Kingdom remains the most important player on oil and religion, as evidenced by dynamics at Thursday’s OPEC meeting.

Saudi Arabia publicly yet indirectly scolded the UAE as OPEC came together. Saudi Prince Abdulaziz bin Salman did not mention the Emirates by name, but flew in the UAE’s energy minister to sit beside his Saudi counterpart. The otherwise virtual meeting saw the Saudis promising to punish OPEC members who failed to comply with production cuts.

The UAE has only realized 10% of its promised cuts and was a prime target of the scolding, evidenced by the UAE’s minister sitting in Riyadh to receive the public dressing-down. When it comes to oil and religion, Saudi Arabia is still the undisputed leader in the region. But that position is under threat as Israel attempts to seduce the Saudis into normalizing relations.

Israel appears to have presented an appealing package of economic incentives to draw the Saudi kingdom into its sphere of influence. The US has indicated it expects five more countries to normalize relations with Israel in the near future, and Saudi Arabia is a prime target.

US President Donald Trump mentioned Saudi Arabia repeatedly ahead of the signing of the Abraham Accords in Washington on Tuesday. “I spoke with the king of Saudi Arabia,” Trump said, adding that normalization would come “at the right time.”

Israel and the US are using a proven method to dislodge Saudi Arabia from its position on Palestine and the Arab Peace Initiative. They use the colonial-era strategy of exploiting regional divisions to “divide and conquer.” The greatest geopolitical weakness of the Middle East has remained for decades the Shia-Sunni divide.

Israel is using the fear of Iran to push Gulf states into considering an alliance that was  previously unthinkable. This strategy is similar to what the British did during the colonization of India, and how the Dutch colonized Indonesia. Israel and the US are fueling and worsening the divide between Iran and the Gulf to make these states abandon their values and consider the unthinkable.

The Shia-Sunni divide was primarily peaceful throughout history, but the West has actively inflamed it and re-written the history of the conflict as an eternal and unsolvable one. The push by foreign empires has resulted in a self-fulfilling prophecy that continues to cripple the Middle East to this day.

According to Saudi author Abdullah Hamiddad, Sunni and Shia Muslims only significantly clashed following the death of the prophet, during the 17th century tensions between the Saffavids and Ottomans, and in our current post-colonial era. Hamiddad calls the idea of a 1,400-year war between Islam’s two main sects a “manipulated myth.”

Author Mehdi Hassan in 2016 pointed out that Iran-Saudi relations were good prior to the Iranian revolution. Even in 1999, Saudi Prince Saud Al Faisal, then foreign minister, said that “there are no limits to cooperation with Iran” and in 2001 both nations signed a security pact. Leaked CIA cables have similarly questioned the existence of a Sunni-Shia divide in Yemen.

The blind opposition to Iran, and Iran’s blind opposition to Saudi Arabia, is pushing Gulf states into supporting a settler colonial state in their midst, Israel. These events are eerily similar to Indian and Indonesian royalty who were duped by the British and Dutch to allow their presence in the early days of colonialism.

The myth of a millennia-old conflict, as Barack Obama once called it, is dividing two parts of a religion that share the vast majority of their religious values. And this comes in favor of an apartheid state that attacks Muslims with impunity in the occupied territories and across its borders.

The US and Israel are now using this divide to push Saudi Arabia into abandoning its support for a free Palestine. The US dangled possible arms deals of its advanced weaponry, like the F-35 fighter-jet, as incentives for an agreement with the UAE. Meanwhile, the US has committed to ensuring Israeli military supremacy in the region.

Both the UAE and Saudi Arabia likely realize that Israel’s lobby in Washington has enough influence to ensure Arab states never come close to achieving Israeli military power. Instead they are seduced by getting an edge over the isolated nation of Iran, crippled by US sanctions and continuing to struggle with its COVID-19 epidemic.

Israel has now offered to build a pipeline from Saudi Arabia to Israel, circumventing both the Strait of Hormuz and the Suez Canal. Such a pipeline would remove the threat of an Iranian blockade of the strait that would hamper oil exports from the Gulf. The pipeline would give the Saudis an edge vis-a-vis Iran, and turn Israel into a link for oil exports to the West.

This pipeline would have been unimaginable even a few months ago. Now that the UAE has normalized ties with Israel, the plan would only need the acquiescence of Saudi Arabia on diplomatic ties. In order to avoid shipping oil past rival Iran, Gulf states could be fooled into letting Israel profit from the region’s most lucrative resource.

In order to accomplish such a feat, Israel is trying to change the Overton Window on Arab-Israeli ties. Repeatedly mentioning Israel’s potential normalization of ties with states such as Saudi Arabia and Morocco, they hope to desensitize the public to the controversial concept. Over and over they present us with media narratives that paint future normalization as a “natural” event.

This media strategy targets the citizens of Maghrebi countries like Morocco and GCC states alike. Israel and the US are normalizing the concept of normalization without a hint of irony. They are presenting normalization as a logical next step instead of an outright betrayal of values and alliances.

US and Israeli media will repeatedly produce articles about the alleged “death” of the Arab peace initiative while using smaller GCC states such as Bahrain, and possibly Oman, to pick apart the pro-Palestine alliance.

The campaign is pushing countries who promote greater cooperation between Iran and the Gulf to pick a side. Traditionally neutral Oman is likely to be next for normalization, while Qatar has faced a years-long siege over its news channel Al Jazeera that does not partake in the demonization of Iran.

If the Middle East is truly to wean itself of foreign influence, a normalization process is indeed needed. But Israel should not be a party to that normalization. A normalization of relations with Iran, even in a minimal way, would result in far greater stability and peace than any deal with Israel or the US ever could.

The apparent impossibility of normalization with Iran comes from a decades-long US-Israeli media warfare strategy to divide and conquer, imagining a war that is impossible to end.

The fact that Gulf states now consider a Zionist settler colonist as a greater possible ally than their neighbor across the Gulf continues to cripple the Middle East.