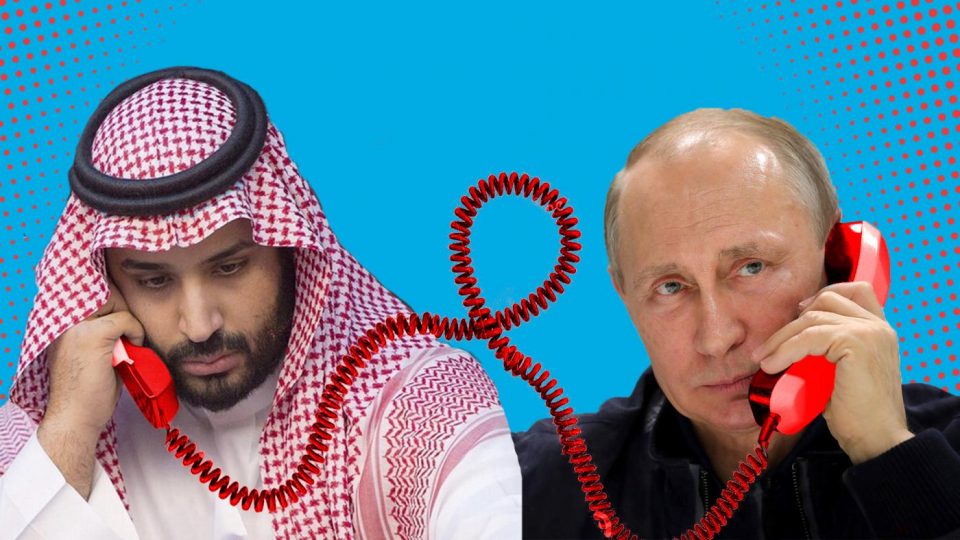 A telephone call last month between Russian President Vladimir Putin and Saudi Crown Prince Mohammed bin Salman degenerated into a shouting match just before Riyadh decided to flood the market with oil in a move which sent prices spiralling.

Saudi officials with knowledge of the disastrous call told Middle East Eye that the row threatened to undo months of detente between the two countries, in which a significant arms trade was also agreed.

The call took place just before an Opec+ meeting on 6 March, in which major oil producers failed to agree a deal on cutting production despite falling global demand as a consequence of the coronavirus pandemic.

“Just before that meeting there was a call between Putin and MBS. MBS was very aggressive and gave an ultimatum. He threatened that if there is no agreement, Saudi would start a price war.

“The conversation was very personal. They shouted at each other. Putin refused the ultimatum and the call ended badly,” the Saudi official said, speaking on condition of anonymity.

Before getting aggressive with Putin, bin Salman checked in with Jared Kushner, President Donald Trump’s son-in-law and senior advisor, who has been described as “the prince’s most important defender inside the White House”, according to a second source who also spoke on condition of anonymity.

“The call [to Putin] had Trump’s blessing through Kushner. Kushner did not ask MBS to do it, but Kushner knew about it and did not veto it. Bin Salman drew his own conclusions,” the source said.

Oil prices plummeted after the meeting in which Opec, Russia and other countries failed to agree on proposed cuts of 1.5m barrels a day. Reports of the meeting suggested that Saudi Arabia had tried to “strong arm” Russia, with one industry analyst commenting: “We have just witnessed the perils of backing Putin into a corner.”

The collapsing oil price was initially hailed by Trump, who initially presented it as an opportunity to fill up the US’s own reserves with cheap oil.

“We’re going to fill it right up to the top, saving the American taxpayer billions and billions of dollars, helping our oil industry [and furthering] that wonderful goal – which we’ve achieved, which nobody thought was possible – of energy independence,” he said.

But the White House subsequently reversed course after protests from US oil producers, many of whom have invested in more costly shale oil extraction and require significantly higher prices in order to break even.

The Saudi row with Putin over oil production undid months of quiet diplomacy between Moscow and Riyadh. This began when Putin seized on Trump’s non-reaction to strikes on two Saudi Aramco gas separation plants by Iranian drones and cruise missiles last September.

Speaking in Ankara in September last year after a meeting with Turkish and Iranian leaders, Putin offered to sell Saudi its own air-defence systems.

“We are ready to provide respective assistance to Saudi Arabia, and it would be enough for the political leadership of Saudi Arabia to make a wise government decision – as the leaders of Iran did in their time by purchasing S-300 and as President Erdogan did by purchasing the latest S-400 ‘Triumph’ air defence systems from Russia,” Putin said.

“They did not sign any contracts. They decided to buy the system, but they put some conditions. The Saudis wanted part of the Russian system to be manufactured at home. They were serious about the system. This was three months after the attack on Aramco,” the official revealed.

The Russian missile system is relatively new. It was unveiled at a Russian Ministry of Defence show early last year. The Russian MoD describes it as being designed to protect small military and military-industrial infrastructures, engaging aerial targets flying at low altitudes.

The link man in these negotiations was a Putin insider called Kirill Dmitriev, the head of Russia’s $10bn state investment vehicle RDIF. Dmitriev told CNBC in October last year that Russia was not trying to fill the void left by the United States in the Middle East.

“Really we are not talking about, you know, the strategic partnerships that Saudi has with the US, and what we are doing is not against the US. It’s actually building something that is very positive,” Dmitriev said.

“And building something that helps the Saudi economy, the Russian economy – and builds the friendship between our nations.”

He added: “We had lots of differences during Soviet times. We had lots of differences in many politics in the Middle East. But now I can report to you that we made really breakthrough and this is a breakthrough because President Putin and King Salman and now Crown Prince Mohammed bin Salman really believed that it’s possible to bring Russia and Saudi Arabia closer together.”

By October last year Saudi Arabia had invested $2.5bn of a $10bn investment pledge in Russian energy, infrastructure and technology.

Dmitriev was introduced to bin Salman by the crown prince of Abu Dhabi, Mohammed bin Zayed, at a meeting in the Seychelles that attracted the attention of Robert Mueller, the special counsel investigating allegations of Russian interference in the 2016 US election.

Dmitriev has been named as the Russian whom Erik Prince had met “for a drink” in the Four Seasons hotel on the Indian Ocean islands. Prince, who founded the American private military contractor firm Blackwater (now called Academi), is now based in the UAE and has close ties and business contracts with the Emirati government.

Prince admitted meeting Dmitriev in testimony to the US Congress but denied it was official. Prince said he met Dmitriev on the recommendation of UAE officials, but mostly discussed private investments.

“They said, ‘Oh, there’s this Russian guy that’s also here to see us. Might be useful for you to meet him,'” Prince stated to Congress.

However Prince’s account of the meeting was undermined by the Mueller Report.

Mueller revealed that George Nader, a fixer for MBZ and convicted paedophile who is currently in custody in the US facing new child pornography charges, had arranged for them to meet after Dmitriev sought an introduction to a Trump transition team member in order to begin improving US-Russia ties.

The report described Dmitriev as reporting directly to Putin who, it said, he often referred to as his “boss”.

By the time Saudi Arabia sought a new partner in Russia, Dmitriev had key credentials to conduct negotiations with Saudi Arabia and bin Salman personally.

These were cemented in a bizarre ceremony in which Dmitriev was awarded the Order of King Abdulaziz, the highest civilian honour in the kingdom.

Dmitriev later played a key role in securing a Russian-Saudi agreement on oil, announced on 12 April, when OPEC+ finally agreed to reduce global production by about 10 percent. By then, the oil price had already slipped to about half of what it was at the time of the rupture.

The deal was agreed amid a series of phone calls between leaders in Moscow, Riyadh and Washington.

On 10 April, the Kremlin announced that Putin had spoken to bin Salman and that the “two had agreed on further Russian-Saudi contacts” in the context of cutting oil production.

On 12 April, Putin had a telephone conversation with Trump and Saudi Arabia’s King Salman to confirm the OPEC+ agreement. Trump subsequently congratulated Putin and King Salman on agreeing the deal in a tweet.

But the deal was not enough to prevent oil markets sliding to historic lows on Monday, with oil prices in US crude oil futures plunging into negative territory and ending the day trading at -$37.63, with oil storage facilities unable to cope with the surplus supply.

Asked whether he would consider halting US imports of Saudi oil to support the domestic industry, Trump said: “We’ll look into it.”

From yacht to not

Dmitriev met bin Salman on 22 February, when the Saudi crown prince began to become concerned at the fall in oil prices, according to MEE’s sources.

“By then, the virus became obvious and the oil price started to come down. He came as an envoy from Putin and discussed these issues. That meeting was not bad, but MBS expressed concern that our budget cannot tolerate the fall in prices,” an official told MEE.

Dmitriev asked bin Salman whether he could moor his yacht off the shores of Saudi Arabia. “Relations at that time were good,” the source said.

MEE contacted the Saudi and Russian governments, and RDIF, but none had responded to requests for comment at the time of publication.

The article is first published in Middle East Eye

From calm to confusion: How Kenya’s COVID-19 frontman lost his sheen

The ‘New World Order’ – A Chance for Africa?