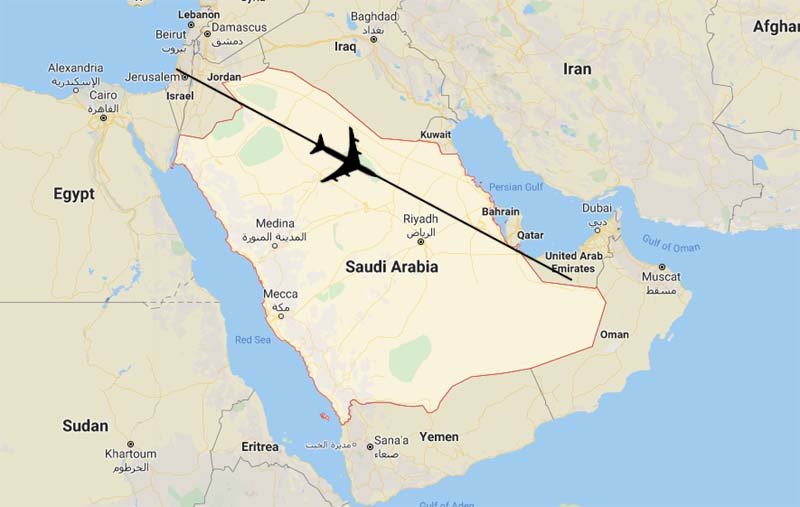 In September, Saudi Arabia declared that it will be allowing all foreign civilian flights to fly over its airspace, but didn’t mention Israel.

By TOBIAS SIEGAL
NOVEMBER 30, 2020 19:45
AN EL AL plane carrying Israeli and US delegations to Abu Dhabi departs from Ben-Gurion Airport on August 31.
Saudi Arabia announced on Monday evening that it has officially given approval for Israeli airlines to fly over the country’s airspace, dramatically shortening flying times to the east and finally allowing Israeli airlines to offer direct flights to Dubai, Israeli media reported.

Transportation Minister Miri Regev congratulated the Saudi announcement. “I’m glad to see that after several long, tense hours of waiting and receiving many inquiries from concerned passengers and airline companies, the Saudis just gave their approval for the first Israeli commercial flight to depart tomorrow as planned. I wish all passengers a safe trip and a safe return,” Regev wrote on Facebook.

Earlier on Monday, Emirati officials clarified on Monday to Israel’s Transportation Ministry that as long as Saudi Arabia doesn’t issue Israeli airline companies a permit to fly over its airspace, the UAE won’t allow any Israeli flight to land in Dubai, KAN reported.

The issue was reportedly examined by the Foreign Ministry, which opened a dialogue with Saudi Arabia in an attempt to speed up the approval process.

In September, Saudi Arabia declared that it will be allowing all foreign civilian flights to fly over its airspace, following a request by the UAE, “in order to allow passage over the kingdom’s airspace for flights reaching the UAE and departing from it.” However, the message didn’t specifically mention Israel, which raised concerns with Israeli aviation officials in recent weeks.

With flights already full, Israeli airline companies Israir, Arkia and El Al are prepared to fly thousands of Israelis to Dubai during the month of December. They can now be calm and know that the flights will be carried out as planned.

The aviation agreement signed between Israel and the UAE allows Israel to prohibit foreign airline companies from using the route from Tel Aviv to Dubai if Israeli airlines are not allowed to use the same route. Such flights are already being operated by various airline companies, including FlyDubai (officially the Dubai Aviation Corporation.)

In September, Jared Kushner told reporters that “Saudi Arabia and Bahrain will allow all Israeli flights to pass over their territory, and not just flights to and from the Emirates.”

That dramatic announcement was expected to have significant effects on Israeli flights to the east, shortening flying time by 2-3 hours to various destinations there. “It’s as if we caused a burst of optimism,” Kushner added at the time. “We see countries doing what’s best for their interests.”