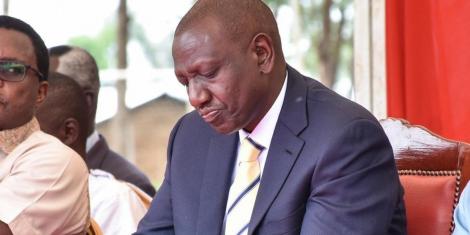 Deputy President William Ruto has taken a swipe at the Jubilee government for using security agents to Frustrate Senators opposed to the Third Basis Revenue Formula.

In a message which seemed to be directed to his boss President Uhuru Kenyatta, Ruto said millions of Kenyans did not wake up to vote for Jubilee so that it can Frustrate them.
He termed Monday’s arrest of Senators: Cleophas Malala (Kakamega), Christopher Langat (Bomet) and Steve Lelengwe (Samburu) as an abuse of the Criminal Justice system.

“The abuse of police and criminal justice to bully citizens, threaten and intimidate leaders, and now blackmail Senate is WRONG. VERY WRONG. It’s NOT the reason millions woke up early to vote for us,” the DP said in a tweet.
The DP, had great words to say to the Senate after it adjourned the motion and formed a 12-member mediation committee to resolve the impasse on the Third Basis Revenue Formula.

” The bipartisan Senate Committee to build WIN-WIN consensus is great wisdom and leadership,” he said.
Ruto has always supported a win-win formula that will ensure no county losses funds. He publicly threw his weight behind an amendment from Senators Johnson Sakaja and Mithika Linturi.

The bipartisan Senate Committee to build WIN-WIN consensus is great wisdom and leadership.The abuse of police&criminal justice to bully citizens,threaten & intimidate leaders and now blackmail senate is WRONG.VERY WRONG. It’s NOT the reason millions woke up early to vote for us

However, Senate Majority Whip Irungu Kang’ata, who supports the one man, one vote, one shilling initiative has recently accused the DP of frustrating the revenue formula because he doesn’t want Mt Kenya to gain.

Over the weekend, Kang’ata told a local daily that Ruto had instructed Senators from Rift Valley to Oppose the formula despite the fact that their counties would have gained from it.