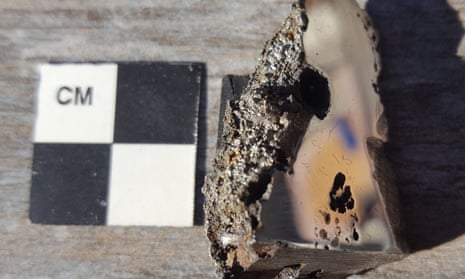 A team of researchers in Canada say they have discovered two new minerals – and potentially a third – after analysing a slice of a 15-tonne meteorite that landed in east Africa.

The meteorite, the ninth largest recorded at over 2 metres wide, was unearthed in Somalia in 2020, although local camel herders say it was well known to them for generations and named Nightfall in their songs and poems.

Western scientists, however, dubbed the extraterrestrial rock El Ali because it was found near the town of El Ali, in the Hiiraan region. A 70-gram slice of the iron-based meteorite was sent to the University of Alberta’s meteorite collection for classification.

Dr Chris Herd, a professor in the department of earth and atmospheric sciences and the curator of the collection, said that while he was classifying the rock he noticed “unusual” minerals. Herd asked Andrew Locock, the head of the university’s electron microprobe laboratory, to investigate.

“The very first day he did some analyses, he said, ‘You’ve got at least two new minerals in there’,” said Herd. “That was phenomenal. Most of the time it takes a lot more work than that to say there’s a new mineral.”

Similar minerals had been synthetically created in a lab in the 1980s but never recorded as appearing in nature, Herd said, adding that these new minerals could help understand how “nature’s laboratory” works and may have as yet unknown real-world uses. A third potentially new mineral is being analysed.

“I never thought I’d be involved in describing brand new minerals just by virtue of working on a meteorite,” said Herd. “That’s what makes this exciting: in this particular meteorite you have two officially described minerals that are new to science.” They have been named elaliite, after the location of the meteorite, and elkinstantonite, after Lindy Elkins-Tanton, principal investigator of Nasa’s upcoming Psyche mission that aims to send a spacecraft to a metal-rich asteroid.

“Lindy has done a lot of work on how the cores of planets form, how these iron nickel cores form, and the closest analogue we have are iron meteorites. So it made sense to name a mineral after her and recognise her contributions to science,” Herd said.

University of Alberta scientists would like to examine other samples from the same meteorite but Herd said there were reports that it had been removed to China. Meteorites are often bought and sold on international markets.

The article first appeared in The Guardian

The garden and the jungle – coloniality, knowledge and development in Africa