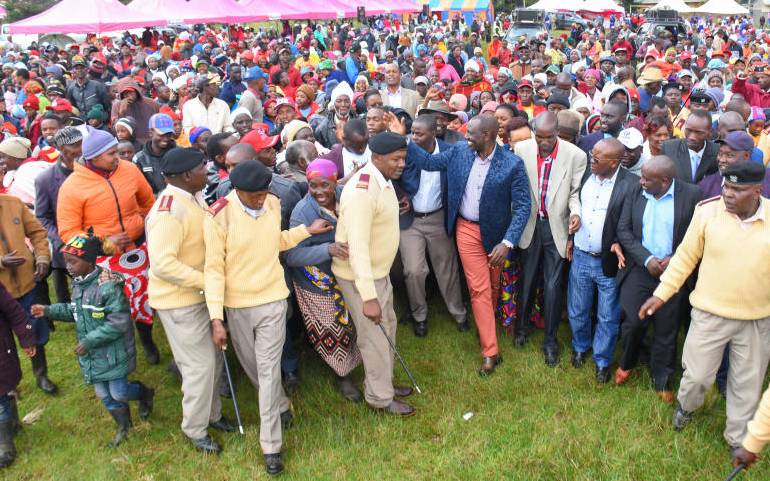 Divisions in the Jubilee Party have been laid bare as factions pull apart despite President Uhuru Kenyatta’s attempts to warn leaders against politicking.

Deputy President William Ruto has rallied more MPs behind him, a fact that is causing jitters at State House. On Friday, 97 MPs from the Rift Valley allied to Ruto, met for two days in Naivasha, Nakuru County ostensibly to discuss the Building Bridges Initiative (BBI) report. Though the Tangatanga lawmakers had met to declare a common stand on the report, they changed their minds and instead said they were open to either the parliamentary or referendum route to implement the recommendations.

The Naivasha meeting comes hot on the heels of another one in Embu where 45 MPs from Mt Kenya allied to Ruto, vowed to support the parliamentary route. While the Rift Valley Tangatanga group met, another group of 14 legislators from Western issued their communique after a meeting in Nairobi. Take positions The group led by Jubilee National Assembly Chief Whip Ben Washiali, an ally of Ruto, also declared that they will support the parliamentary route to implement the report.

Whereas the three meetings were meant to interrogate and take positions on the BBI document political analysts have opined that they are basically choreographed to show the political influence of the DP. “Look at all the well coordinated meetings, in isolation they look okay and about the BBI but the bigger picture will tell you this a political statement, the allies are saying we are here,” said Dismas Mokua, political analyst.

Nyeri Town MP Wambugu Ngunjiri agrees that Ruto’s influence among the Jubilee legislators is immense. “Ruto has been leading the political arm of Jubilee as President Kenyatta is busy with the implementation of the government agenda. Using that network, Ruto has managed to gain clout,” he said. Mr Ngunjiri, however, insists that Ruto has not used his influence to help Jubilee government but just to foster his political ambition for the presidency. “His clout is for the selfish interest, it is not beneficial to the ruling party,” he said. Tetu MP Mwangi Gichuhi puts the DP’s control of of the Senate and National Assembly at 60 per cent across the political divide.

“The percentage is rising every moment,” he says. Kimilili MP Didmus Barasa claims that only fifteen out of 197 elected and nominated MPs were not in support of the DP and ‘mostly’ sympathetic to Raila. “Forget the Jubilee Party, his (Ruto) tentacles have extended to Ford Kenya, ANC and ODM. Infact we plan as his MP supporters a retreat where we will bond across the political divide and strategise ahead as one team,” Mr Barasa says. Held at ransom On Wednesday, President Uhuru Kenyatta while addressing residents at Mangu Catholic Mission where he launched a church-sponsored hospital, in Kiambu County, he warned leaders against politicking.

The President said he was not a fool to be held at ransom by succession politics and opposition to the BBI report. “I choose to be quiet for now but a time to reckon is coming and we shall elaborately discuss those issues,” he said. Mr Kenyatta has promised an all-out assault on politicians ostensibly hostile to the BBI report. State House spokesperson Kanze Dena, however, called a press conference to clarify that the President and his deputy were in a good working relationship. But there are some who have claimed that Ruto’s take over of the Jubilee numbers in the legislature could have started during the party primaries in 2017. A group of former MPs from Mt Kenya and Nairobi region blame their defeat in elections on Ruto. “Deputy President has quietly been working to displace President Kenyatta as the political kingpin in Mt Kenya, he has won over not only the local leaders and has surprisingly walked away with the residents as well,” says political analyst Javas Bigambo. Bigambo notes that after the elections in 2017, Ruto has continued to widen his support base. “Similar attempts have bore fruits in Western and partly in the Coast where he has increased his allies in the Jubilee Party and continues to win members of the opposition to his fold,” he says. Speaking at Gakoigo Showground in Maragua, Murangá County on Friday, Senator Irungu Kangáta and Woman Representative Sabina Chege told residents that they did not have any problem with the DP. Given Ruto’s control in the House numbers, President Kenyatta has on a number of occasions been forced to rally ODM and Wiper MPs to support government agenda. In October, the Senate vote for the Public Finance Management (National Debt) (Regulations), 2019 was supported by ODM and Wiper leaders. The MPs allied to Ruto wanted to shoot down the regulations, arguing that the decision to increase the capping could only be done after the ruling party’s parliamentary group took a position on the matter. The regulations provide for a numerical limit to the total public debt of Sh9 trillion in place of the current limit set at 50 per cent of the gross domestic product in net present value terms, which is approximately Sh6 trillion at the moment.