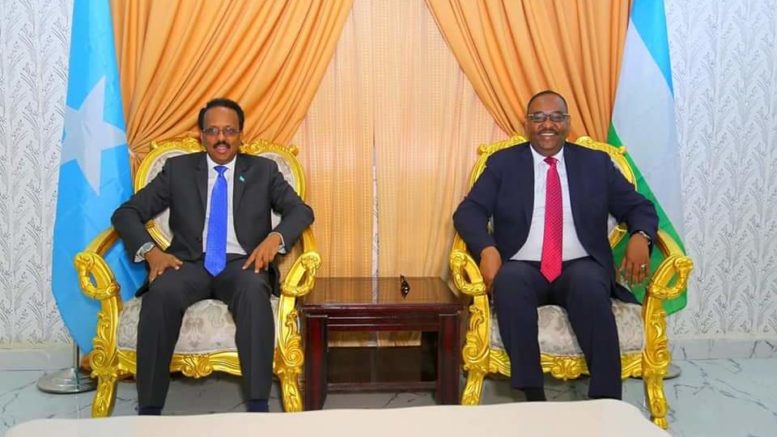 The Somalia Federal government’s   National Independent Electoral Commission-NIEC has been barred from conducting activities in Puntland.

Puntland which is usually a rebellious regional state of Somalia closed the offices NIEC in Garowe, the state capital on Friday 6th February 2020 prior to a planned high level consultative meeting to review the regional states membership of Somalia federal government institutions.

According to sources the cause of the FGS membership review is the high-hardness manner in which president Mohamed Abdilahi Mohamed aka Farmajo of Somalia implements policies seen as geared towards marginalizing the authorities in Garowe.

NIEC, which was established last December under the electoral law passed, last December by the Federal Parliament in Mogadishu, has the mandate to organize one person, one vote elections in parts of the Federal Republic of Somalia.

According to reports Puntland State which is a constituent and founding member of the Federal Government hardly enjoys the privilege such membership entails.

The first Farmajo visit to Garowe was in 2018 while the second was in 2019 taking place just a few months after Said Abdilahi Deni took over as a President of Puntland State on the heels of disputes over legislations passed by the Federal Government and educational policies that had and now coupled with election process differences that continue to drive a wedge between the Federal Government and Puntland State reports the Puntlandpost.

If the outcome of the impending consultative summit turns out to be withdrawal from membership in the Federal Institutions, a constitutional crisis may result in either the dissolution or downgrading of the Federal Government, which is planning a two-year extension if election plans fail to come to fruition.

NIEC whose Establishment under the just enacted Somalia electoral law was hailed by the war torn country’s international partners as a milestone that will actualize the much sought after transition to full democracy through a one person one vote.

Quote- Somalia’s international partners* reaffirm their commitment to supporting preparations for the 2020/2021 federal elections.
In order for elections to be held on time, it is essential that an implementable electoral law be adopted as a matter of priority, in keeping with the Mutual Accountability Framework agreed between partners and the Somali authorities in October 2019. Read statement signed by AMISOM), Australia, Denmark, Djibouti, Egypt, European Union, Finland, Germany, Intergovernmental Authority on Development (IGAD), Italy, Kenya, Netherlands, Norway, Sudan, Sweden, Turkey, United Kingdom, United Nations and US.

The partners stressed the importance of finding solutions to aspects of the bill that remain unresolved, such as the definition of constituencies, the allocation of Upper House seats, progress in achieving the Somali goal of “one person, one vote,” measures to ensure a minimum of 30 per cent representation of women, voting arrangements and representation for Banadir and Somaliland, as well as other operational arrangements. They called on the Parliament to finalize an implementable law without delay to avoid a risk of political instability.

This paragraph mentioning Somaliland which withdrew from its 1960 voluntary later turned fateful union in q1991 drew the ire of authorities in the de-facto country’s capital Hargeisa warning the IC to tread cautiously.

Quote- The Government of the Republic of Somaliland, in light of a recent joint press statement in January 28, 2020, on Somalia’s electoral law by its international partners, would like to caution the international community against any interventions in the region that risk compromising Somaliland’s hard-earned, lawful and legitimate sovereignty, territorial integrity and political independence.

Quote- The U.S. Government is committed to supporting the Somali people in their efforts to build government institutions that are responsive to their needs. We recognize that Somalia is in a difficult phase in its journey towards democracy. While recent electoral processes were imperfect, we call on all Somalis to focus on reconciliation. By reaffirming reconciliation between the Somali Federal Government and Member States, Somalia’s leaders will uphold their own commitments to increase political inclusion and pursue long-term peace, security, and stability for all Somalis. Unquote

For Somaliland a former British protectorate that aspires to international recognition as a sovereign nation the events unfolding in Puntland are food for much thought in lieu of both its quest for official and final separation from Somalia as well as pertains its regular skirmishes with the regional authority to that claims eastern parts of territories under the jurisdiction of Hargeisa.

If acrimonious between Puntland and its mother government in Mogadishu persist to ultimate parting of the ways a peaceful respite in Somaliland shall ensue since authorities in Garowe shall be devoid of military and financial support availed by Somalia to destabilize its political nemesis in the north.

On the negative side for the elusive three decades Somaliland quest for international recognition is the muscle that Punt land’s secession shall provide to the Somalia argument that withdrawal of Somaliland is tantamount to balkanization of the war torn country.