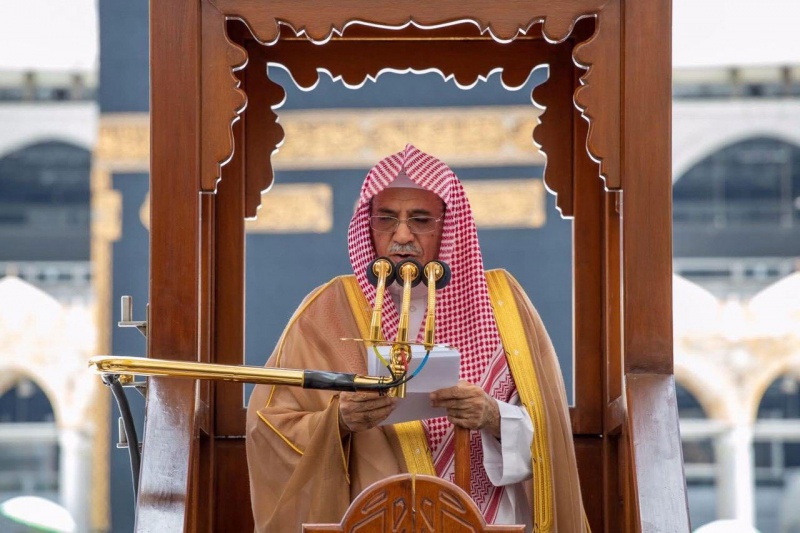 The 15 seconds devoted to praying for the “rapid Jews” in the last Friday sermon at the Grand Mosque were the subject of widespread controversy on Twitter in Saudi Arabia, in which external parties interfered.

The 15 seconds devoted to praying for the “rapid Jews” in the last Friday sermon at the Grand Mosque sparked widespread controversy. The imam and preacher of the Grand Mosque, Sheikh Saleh bin Humaid, said in the supplication of the last Friday sermon, which appeared to be written: “Oh God, be upon you with the usurping and occupying Jews, for they will not incapacitate you.” And he continued, “Oh God, bring down on them your power that does not turn away from the criminal people.. O Allah, we protect you in their faces.. and we seek refuge in you from their evils.”

The prayer angered Israelis who write in Arabic on social networks. Saudi and Arab tweeters also considered the prayer for the Jews “outside the text,” while another section considered the sermon a political message to Saudi Arabia and Israel.

Israeli tweeters also criticized Bin Hamid, who had previously used the same supplication in the Eid sermon last year in the Great Mosque of Mecca. And Jay Maayan, a journalist on Israeli television, addressed the “Saudi brothers,” saying:

On the other hand, tweeters launched a hashtag of solidarity with the imam and preacher of the Grand Mosque, Saleh bin Hamid, entitled #We are all Sheikh_bin_Hamid .

As usual, the Brotherhood and fake accounts calculated on them tried to ride on the event. Tweeters mocked the Brotherhood’s attempt to sway Saudi public opinion, while accusations were leveled day and night against their leaders.

The campaign to defend Hamid was led by religious figures affiliated with the Brotherhood, supported by electronic armies, after which the media outlets that revolve in their orbit receive their tweets and publish articles asking, “Will the sheikh be removed?”

Commentators consider that the Brotherhood and those who came out of their cloaks, who have always “controlled” religion and ate it, are trying to win over Saudi public opinion, which has met the matter with extreme indifference, especially since the relationship of the Saudis and the Palestinians is witnessing clear tension and often takes the top of the issues #Palestine_is not the Saudi trend.

Many say that the Arabs in general and the Saudis in particular have lost interest in what is happening in the Palestinian territories. In recent years, influential Palestinians, politicians, media professionals and others, have turned into pawns in the hands of countries hostile to Saudi Arabia, and they are fighting proxy wars that have affected the Palestinian cause.

It is noteworthy that Saudi Arabia does not recognize Israel, and insists in its official statements on normalization with Israel that it will not normalize relations unless the Palestinian issue is resolved.

Saudi Arabia adheres to the Arab Peace Initiative (launched at the Arab summit in Beirut in 2002), and the Saudi initiative proposes the establishment of normal relations between the Arab countries and Israel, on the condition that the latter withdraw from the Arab territories occupied since 1967, and accept the establishment of an independent state for Palestine with East Jerusalem as its capital, with a solution Just for the refugee issue. A tweeter said:

The appointment of the head of the Association of Muslim Scholars, Sheikh Muhammad Al-Issa, as a preacher for the Day of Arafa in Saudi Arabia, mobilized the Brotherhood’s propaganda machine, which descended with its weight, especially on Twitter, to object, distort and issue fatwas. and mocked account:

Before Thursday, the Zionist media, with the support of Palestinian symbols, were trying to portray Prince #Mohammed_Bin_Salman as an ally and friend of Israel, but after 24 hours, after Bin Hamid’s sermon, they became a joke to everyone.

And the Saudi journalist, two members of Al-Ahmari, had previously warned of “extremists hiding in different masks, with various names. They take chances to try to spread poison and then hide.” Saudis considered that the campaign falls within the framework of incitement against Saudi Arabia. Columbus’ account tweeted:

Muslims have been praying for them for 80 years and from inside Jerusalem after an illusion they are upset! The previous one is not preaching and advocacy, and it has nothing to do with religion and the pulpit.

On the other hand, Arab tweeters refused to pray for the Jews. Kuwaiti political analyst Jassem Al-Jurayd expressed his shock, saying:

And a tweeter mocks:

1400 years..and we explain what they said…why did they say and what did they mean…1400 years of prayers and supplications for Christians and Jews..to disperse them and we were left with no reunion..to destroy their homelands..and we had no homelands…for captivating their women..and only Muslim women were taken captive