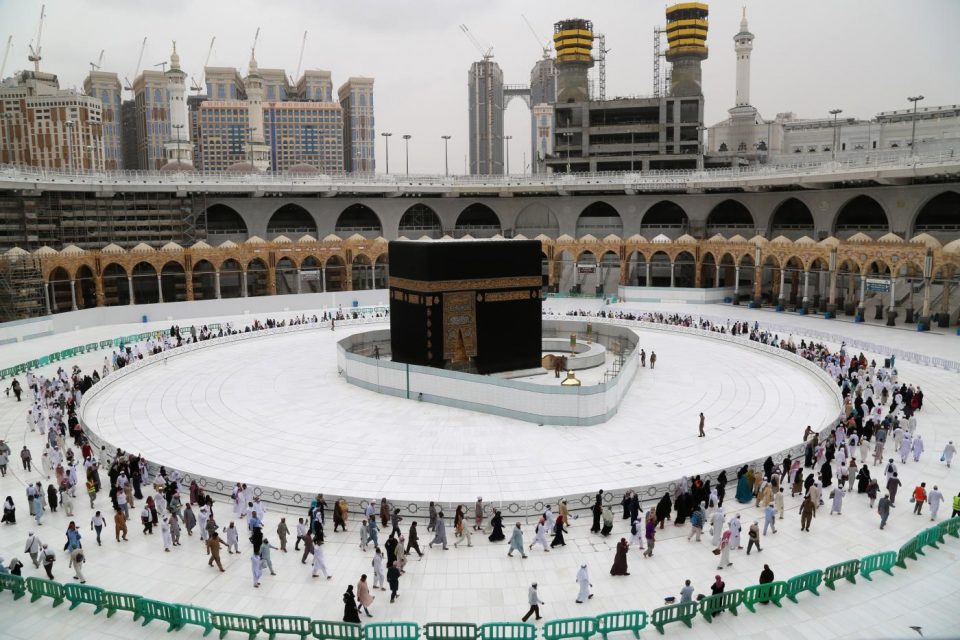 Muslim worshippers circumambulate the sacred Kaaba in Mecca’s Grand Mosque, Islam’s holiest site,13 March (AFP)
Coronavirus may see pilgrimage scrapped for the first time since the founding of Saudi Arabia, but 2020 will join a long list of years that have missed the annual event

Saudi Arabia on Tuesday laid the ground for this year’s Hajj pilgrimage to be cancelled, calling on pilgrims to defer preparations and travel bookings due to fears of the coronavirus pandemic.

Around two million people visit Mecca to perform the annual pilgrimage, which this year was set to begin in July, but plans have been thrown into doubt as the kingdom has recorded 1,563 coronavirus cases and 10 deaths.

Like many countries, Saudi Arabia has enforced a lockdown and curfew in an attempt to stem the outbreak, and entry to the holy cities of Mecca and Medina has been severely restricted. Riyadh has already suspended the lesser Umrah pilgrimage.

Muhammad Salih bin Taher Banten, minister of Hajj and Umrah, told a Saudi TV channel that Muslims – who are expected to perform Hajj at least once in their lives – should “wait before concluding contracts”.

“We have asked our Muslim brothers around the world to wait before making contracts until things become clear,” Banten said.

“Under the current circumstances, as we are talking about the global pandemic, from which we have asked God to save us, the kingdom is keen to protect the health of Muslims and citizens,” he added.

Banten said that the Ministry of Hajj and Umrah has refunded the fees of Umrah visas to travel agencies after visits to Mecca were suspended late in February.

Though Hajj has been cancelled several times over the centuries, since the Kingdom of Saudi Arabia’s foundation in 1932 it has never missed a year, nor even during the Spanish flu pandemic of 1917-18 that killed millions of people worldwide.

But if Saudi Arabia cancels 2020’s Hajj, it will be added to a list of almost 40 dramatic cancellations since the first in 629. Middle East Eye takes a look at some of the most striking cancellations in history:

During his conflict with the Abbasid Caliphate based in Baghdad, Ismail bin Yousef, known as Al-Safak, launched an attack on the holy Arafat Mountain overlooking Mecca in 865, massacring pilgrims there. The raid forced Hajj to be cancelled.

In 930, Abu Taher al-Janabi, the chief of the Qarmatians heterodox sect based in Bahrain, launched an attack on Mecca.

Historical accounts say the Qarmatians killed 30,000 pilgrims in the holy city and dumped bodies in the sacred Zamzam well. They also looted the Grand Mosque and stole the Black Stone from its Kaaba, taking it to the island of Bahrain.

Hajj was then suspended for a decade until the Black Stone was returned to Mecca.

The Qarmatians were an Ismaili Shia sect who believed in an egalitarian society and considered pilgrimage a pagan ritual.

Politics, too, has disrupted Hajj. In 983 political disputes between the rulers of two caliphates – the Abbasids of Iraq and Syria and the Fatimids of Egypt – got in the way of Muslims travelling to Mecca for pilgrimage. It would be eight years until Hajj was held again, in 991.

Not only conflicts and massacres have cancelled Hajj. A plague from India hit Mecca in 1831 and killed three-quarters of the pilgrims there, who had endured weeks of travel through dangerous and barren lands to perform Hajj.

In a span of almost two decades, Hajj was halted three times, leaving pilgrims unable to head to Mecca for a total of seven years.

In 1858, another global cholera pandemic arrived in the city, prompting Egyptian pilgrims to run away en masse to Egypt’s Red Sea shores, where they were held in quarantine.