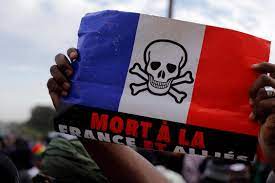 Franco-Mali relations have been feverish for the past two years, following the August (2020) coup in Mali, when President Ibrahim Boubacar Keïta was replaced by the military. And for an outside observer it looks like a bout of split personality in Paris.

France has announced, since June 2021, through the mouth of its President E. Macron, that it is operating a “profound transformation” of the French military presence in the Sahel-Sahara region, above all in Mali, according to which the French contingent carrying out the “anti-terrorist” operation Barkhane will be reduced from 5,000 to 2.5-3,000 men.

And before this abrupt U-turn in its policy, Paris was doing everything it could to gain a foothold in this strategic zone of French interest. Not only had it been carrying out Operation Serval since 2013, formally aimed at separatist Tuaregs dreaming of their own state of Azawad, which was then transformed into the now ill-fated Barkhane, but it also actively contributed to the creation in 2014 of the so-called “Sahel Five” (Burkina Faso, Chad, Mali, Mauritania, Niger) to combat terrorists. Paris has also actively motivated the EU to create a European special force, Tacuba, to assist France in the fight against terrorism.

All this frenetic activity occurred for reasons in which the French leadership itself, as they say, had a hand. Such a deep involvement of Paris in the region was triggered by the defeat of the Libyan state, with its direct involvement, and the assassination of its leader M. Gaddafi in 2011. This has led to a sharp increase in terrorist threats, as jihadist groups that had entered the “operational space” in Libya have actively infiltrated the Sahara-Sahel region and threatened the stability of this zone of French interests.

However, soon after a period of frenetic regional and international alliance building, with Paris and its military contingent at the focal point, it became clear that France was simply bogged down in the Saharan sands and could not (or would not) fulfil its mission. And this was apparent not only to extra-regional players, but also to the members of the Sahara-Sahel Five themselves, who, above all Mali, have begun to develop a misunderstanding with Paris. While the regional powers saw the prospect of an increasingly strengthened role for France and its European partners in the fight against terrorism (all the more so because they understood its responsibility for the situation), for the French leadership the building of regional and European alliances in the Sahara-Sahel theatre was seen as a way of reducing its own military and financial contribution to the fight against terrorism against the background of growing internal economic problems in France itself. This was compounded by criticism from the Malian authorities, who blamed Paris for the ineffectiveness of its contingent, if not the indulgence of terrorists.

As a result, the announced “deep transformation” of Operation Barkhane has led to widespread discontent in the region, but above all in Mali itself, where one of the causes of the 2020 coup was precisely the inefficiency of the pro-French authorities in combating terrorism. In Bamako, they rightly decided that since France had started withdrawing its troops, they should look for new ways to strengthen their own security. Russia appeared to be such a partner to the new authorities as it had shown that stabilization could be achieved with relatively small forces, as had been the case in Syria and the Central African Republic. This looked particularly convincing against the unsuccessful attempts to deal with jihadists by giant Western coalitions, involving fifty-odd states each in their stated ambition to defeat ISIS (a terrorist group banned in Russia).

The French authorities should have sprinkled then ashes upon their heads, acknowledged their mistakes and proposed new options for cooperation, rather than multiplying diverse and, as life has shown, ineffective initiatives such as the Coalition for the Sahel.  But no! Instead, the French authorities launched a schizophrenic attack at the UN, at regional level and in the media against the Malian authorities, who had “dared to invite” an undesirable partner for Paris to help them! Obviously, Russia has also taken a hit, especially for the decision of the new Malian authorities to invite the independent Wagner PMC.

And on February 17, 2022, 28 countries, including the Coalition for the Sahel, explicitly at the initiative of Paris, announced the winding down of Barkhane and Takuba in Malian territory and the withdrawal of troops within 4-6 months. At the same time (since January 9 this year) harsh economic sanctions have been imposed on the Malian regime through the French-controlled regional integration body ECOWAS (which includes former French colonies in Francophone West Africa) on the pretext that the new regime in Mali is not accepting the terms of transition and holding elections. And it was clear to an outside observer that the Malian authorities were genuinely trying to reach a compromise by proposing to halve the duration of the transition period, but ECOWAS, obviously under pressure from Paris, continued to insist on even more concessions.

This unbridled interference by France has not been beneficial to the countries of the region. On May 15, the Malian government announced its decision to withdraw from the Sahel Five precisely because of pressure from the Western camp, above all Paris, on Bamako, including the reluctance to hand over the chairmanship of the group, which was to have passed to Mali back in February.

The reasons for the French sweeping accusations against Bamako and Moscow – for their involvement in the fight against terrorism by the Wagner PMC and for the crimes allegedly committed by them and the Malian authorities on Malian territory – are evident. France is rapidly losing influence in its traditional zone of interest. In the region, appreciation of Russia is growing and there are ongoing demonstrations in support of Moscow, even though the special military operation in Ukraine has been widely criticized by Paris and the collective West as “unmotivated aggression”.

Paris, however, is unwilling to work on its mistakes and recognize the perniciousness of its policy of siphoning off resources from the countries of the region, its refusal to build equal relations with them and its inexorable desire to teach and impose its neocolonial social and economic development models and to flirt with terrorists on the pretext of combating them. Instead, it hurls curses at the Malian authorities and Moscow, labelling and baselessly accusing them of what it has been doing for decades on the African continent – organizing coups, assassinating undesirable politicians, plundering natural resources and shackling countries in the region with oppressive terms of cooperation. However, this lying and aggressive line will hardly help it any more…