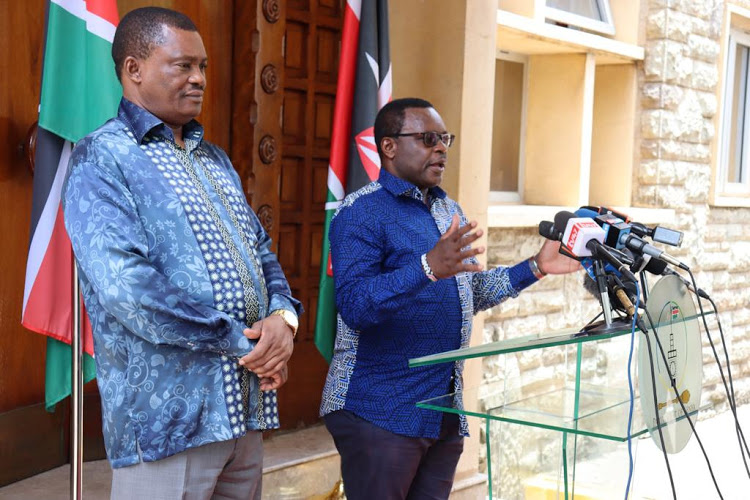 By JULIUS OTIENO AND LUKE AWICH

• Speakers told to cancel special sitting of both houses because some MPs had tested positive, sources say

Panic has hit Parliament after reports emerged that 17 legislators and parliamentary staff have tested positive for Covid-19.

According to multiple sources, the Ministry of Health told the Speakers to cancel the special sitting of both Houses because some of the MPs had tested positive.

A number of MPs were randomly tested last week and their results came out on Monday, causing panic and anxiety in the bicameral House.

“They are suspecting 17 Members of Parliament have been tested and turned positive. The information is not clear but it’s members and staff. So that is the reason why the House was suspended,” a legislator said on condition of anonymity.

We cannot reveal their identities because it is against the law to reveal someone’s health status without their permission.

A senator told the Star the Speaker made the late evening announcement to protect other members from contracting the disease.

Senators, Members of the National Assembly and staff have been undergoing voluntary tests for Covid in Parliament Buildings since last week.

More than 200 members who have undergone the test, including the Speakers, have been receiving their individual results from the Ministry of Health.

But Senate Speaker Kenneth Lusaka discounted the claims as rumours, saying it was not easy to tell the condition of the members unless they personally said so as the results were issued privately.

The Speaker reiterated that they called off the sittings following the declaration of cessation of movement in Nairobi and its environs by President Uhuru Kenyatta.

“People should not spread uncalled for rumours. That was voluntary testing and the results are given to the person who has been tested,” he said.

He added: “The person who knows whether anybody is positive or negative is the person who has been tested himself and the Ministry of Health. Anybody [else] talking about it is just a rumour. I can tell you I personally tested and I was negative.”

He said the ‘rumours’ and anxiety could be caused by delays in releasing the results of some members by the Ministry of Health.

National Assembly Minority Leader John Mbadi said the decision to cancel Wednesday’s special sitting was to allow MPs who participated in the voluntary testing to get their results.

The Suba North MP said it would have been reckless for the House to defy the health officers’ advisory and proceed with the special sitting.

“The reason why the sitting was cancelled – what I was made aware – is that MPs were tested on Friday and Saturday. The Ministry of Health advised that it would be reckless for us to have a sitting before the statuses were confirmed,” Mbadi said on the phone

In their communication to the members on Monday evening, Lusaka and his National Assembly counterpart Justin Muturi cited the President’s cessation order.

“In the circumstances, it has, therefore, become necessary to inform you that it will not be possible to hold the sittings of the Houses of Parliament as scheduled, until further notice,” they said in their message to all Members of Parliament.

However, National Assembly clerk Michael Sialai has confirmed the members will reconvene on Tuesday next week in line with its calendar.

“Hon Members, please note that what the Speaker of the National Assembly called off yesterday evening was the special sittings of the House scheduled for Wednesday, April 8, 2020. The Calendar of the House, including the resumption of the sitting on 14th April, remains as resolved by the House on March 17, 2020,” Sialai’s communication reads.

Last week, the Parliamentary Service Commission set up screening and testing tents for members and staff at Parliament Buildings.

In a message to MPs, the leadership of the Houses urged the lawmakers to voluntarily take the tests.

“MPs and staff are free to be tested at two tents at National Assembly and Senate gates. Please take note,” a message sent to the lawmakers reads.

Sources disclosed the move was necessitated by fact that some members had just returned to the country from countries hit by the virus.

Some members and staff had been on mandatory self-quarantine. A week ago, some of them took to the social media to celebrate and thank God for the successful completion of the 14-day quarantine.

On March 17, Senate Majority Leader Kipchumba Murkomen caused panic in the chamber after he said that some members of the House travelled in the same plane with a person who was confirmed to have contracted the disease.

Yesterday, Sialai in a communication to MPs seen by the Star cited “review of the health and safety arrangements relating to the reassurance of the health of members and parliamentary staff” as the reason behind the postponement.