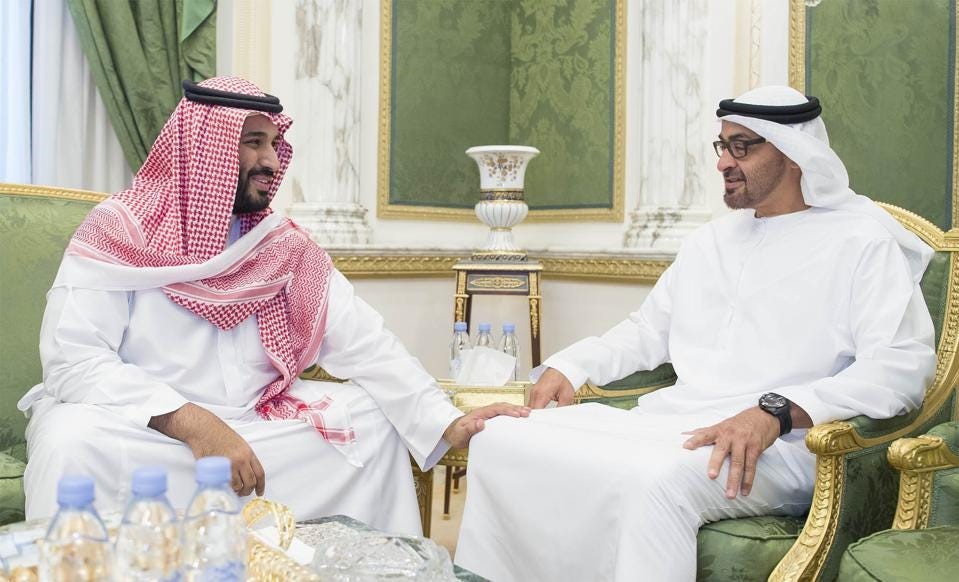 First it was over the war in Yemen, then Syria and Israel, then OPEC quotas, and now it’s cross-border trade. The pace of disagreements between Saudi Arabia and the United Arab Emirates is reaching a fever pitch. Persian Gulf watchers are wondering whether the bust-up signals a larger shift in regional relations.

Not exactly. While there are new strategic divergences, particularly over climate action and interventions in regional conflict, fractious Saudi-UAE relations are nothing new. The gathering dispute is better understood as a return to the pre-2015 status quo than a unique diplomatic breach.

Either way, the results have been interesting. Besides the rare dispute over oil output, Saudi-UAE infighting has ended the Gulf’s anti-Iran axis.

Both monarchies have been easing tensions with Tehran that, not long ago, they were keen to stoke. Here, also, we’re seeing a return to a more normal state of affairs.

‘MEETING OF THE MINDS’ NO MORE

Wariness was a legacy of territorial disputes between Saudi Arabia and Abu Dhabi during the early years of UAE independence in the 1970s. Emiratis felt justifiably dismayed when a 1974 border settlement handed the super-giant Shaybah oilfield to the Saudis.

Border issues rankled as recently as 2006, when the UAE government published a map that appeared to revive Emirati claims to a swath of the Saudi Eastern Province. Riyadh promptly closed the border and caused miles-long traffic tailbacks on the UAE side.

The imposition of Saudi border tariffs this month on goods produced by foreign workers in neighboring countries is a throwback to the 2006 imbroglio. The UAE, and Dubai in particular, is most affected, due to its foreign-dominated manufacturing sector that exports to the region.

The previous peak in Saudi-UAE tensions came in 2009 when the Emiratis walked away from the planned single Gulf currency, which was supposed to launch in 2010. Abu Dhabi had campaigned hard to host the Gulf Central Bank, only to lose out again to Riyadh.

It was the Arab Spring that improved the Saudi-Emirati dynamic. The uprisings pushed the fractious pair to cooperate in reasserting authoritarian control across the region, seeking to roll back the gains Saudi and Emirati leaders saw as accruing to Islamist groups backed by Iran or Qatar.

The 2015 accession of King Salman and rise to prominence of his son, the crown prince, Mohammed bin Salman, initially brought even closer relations. The two monarchies launched the war in Yemen and, after President Trump’s election in 2016, jointly blockaded Qatar.

Now, the ending of that dynamic is bringing change and uncertainty.

The most serious fallout has been within OPEC, where the UAE has typically been a stalwart partner of the cartel’s de facto leader, Saudi Arabia.

But this month, the UAE’s demand for a 700,000 barrel/day increase in its oil production baseline—the number used to calculate a member’s quota—triggered a breakdown in negotiations. This week, UAE officials signaled OPEC was nearing a compromise.

The UAE’s audacious demands, based on several years of investment in raising oil production in Abu Dhabi, signaled a change in how the monarchy plans to deal with climate action and the possible peaking of global oil demand.

Rather than seeking top dollar for its crude exports, Abu Dhabi now sees its optimal strategy as one that maximizes production and market share.

This strategy hinges on expectations for tightening climate action and restrictions on fossil fuel use, like those just announced in the European Union and China. The more aggressive governments get in curtailing fossil fuel, the lower the potential for future oil prices. Credible forecasts suggest oil could average less than $20 per barrel by 2050.

Abu Dhabi isn’t taking such forecasts sitting down. It is ramping up production from 3.5 million b/d in 2018 to 5 m b/d by 2030, to prevent reserves being stranded underground. If that means lower prices, so be it.

Abu Dhabi can do this because the UAE already has a diversified economy – much of it based on prudent investments by Dubai over the past five decades.

The Saudis are also ramping up oil production capacity from 12m b/d to 13m b/d, but the kingdom’s oil-dominated social contract and state budget are not yet ready to withstand dramatic declines in oil income.

As the UAE-Saudi axis deteriorates, so has the hard line against Iran. Clues pointing in this direction are increasingly apparent. MbS’ language on Iran has softened dramatically since the bellicosity of 2016-18, when the kingdom abruptly cut diplomatic relations.

The 2019 attack on the giant Abqaiq processing plant, in which missiles and drones credibly attributed to Iran knocked out nearly 6mbd of Saudi oil production, appears to have focused Saudi minds on the wisdom of taking on Tehran. President Trump’s rejection of any US response was also a wakeup call for Gulf partners who had taken a forceful US response for granted.

This month Saudi oil minister Prince Abdulaziz made surprisingly warm remarks about his retiring Iranian counterpart, describing Bijan Zanganeh as his “friend” and someone he could work with in OPEC regardless of tensions between the two countries.

The UAE, likewise, has been busy patching up with Iran. The UAE is perhaps more exposed than the kingdom. Besides the critical power, water and energy infrastructure lined up like targets along its shoreline, the UAE also hosts thousands of Iranian businesses and hundreds of thousands of Iranian expatriate residents. In the event of war, Iran would have a smorgasbord of conventional and asymmetric options.

Worth noting is the fact that the Saudis and Emiratis have reached out to Iran separately and in different ways. The Saudis have done so indirectly through intermediaries such as the Iraqis, while the UAE has sent delegations directly to Teheran.

Finally, Saudi Arabia and the UAE have moved at different speeds to patch up relations with Qatar since the three-and-a-half-year rift came to an end in January 2021.

Pressure to end the blockade of Qatar came from a Saudi leadership anxious to demonstrate to the incoming Biden administration that MbS had learned from his missteps during the Trump years.

Qatar’s emir visited Jeddah in May and Qatari ties with Saudi Arabia (and fellow blockader Egypt) have improved farthest and fastest since January, leaving the UAE lagging behind.

While much is being made of the increasing daylight between UAE and Saudi diplomacy—differences over Syria and Israel among them—it’s worth remembering that the lockstep friendship that began cooling around 2018 was the anomaly.

Kristian Coates Ulrichsen is a Middle East fellow at the Baker Institute.

Adopted from the original source- Fobes