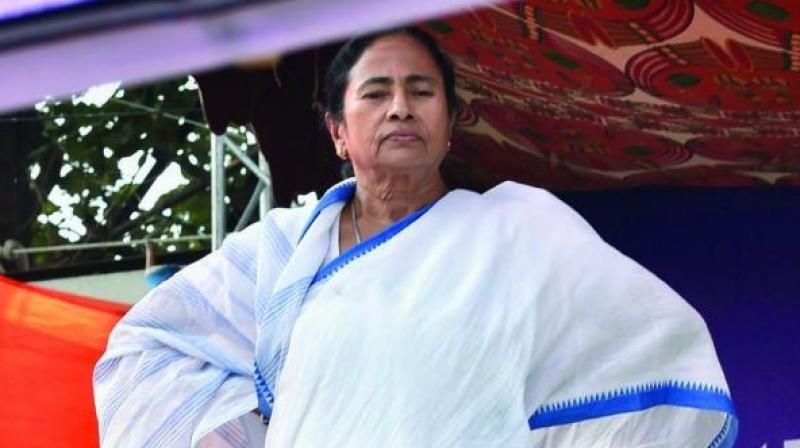 Published Dec 16, 2019, 9:11 pm IST
‘As long as I am alive, I will never implement the citizenship law or NRC in the state. You can very well dismiss my government or put me behind bars but I will never implement this black law. We will continue to protest democratically till this law is scrapped. If they want to implement it in Bengal they will have to do it over my dead body,’ Banerjee said. (Photo: File | PTI)

Kolkata: Daring the Centre to dismiss her government, Chief Minister Mamata Banerjee vowed on Monday to not implement the citizenship law and the proposed NRC, which she said can only be enforced in West Bengal over her dead body.

Banerjee, who led a mega rally in the heart of the city, alleged that a few people were paid by the BJP to perpetrate violence in the state, even as she blamed some powers from outside West Bengal “acting as friends” of the Muslim community for vandalism and arson.

The TMC supremo, who led the rally from Red Road to Jorasanko Thakur Bari, the ancestral house of Nobel laureate Rabindranath Tagore in north Kolkata, was joined by thousands of supporters with placards like “No CAA” and “No NRC”

“There are some forces from outside the state, who are acting as friends of minorities and have indulged in this violence. These forces are stooges of the BJP, don’t fall into their trap,” Banerjee said in an apparent reference to Asaduddin Owaisi’s AIMIM with whom she got into a war of words recently.

If the BJP thinks it can ‘bulldoze’ everybody to implement the law, then they are wrong, she asserted.

“No one will be ousted from the state. We believe in coexistence of all religions, caste and creed,” Banerjee said as she read out an ‘oath’ for her party workers at the beginning of the rally near a statue of BR Ambedkar in Red Road.

She urged agitators to not indulge in vandalism and arson, and said it will only undermine the very motive of the protest.

“If you indulge in violence, you cause lot of inconvenience to the common people. Those who support your cause gets angry, and you would lose their support,” she said.

She further alleged that railway services have been suspended in most parts of the state by the Centre “just because few trains have been set on fire”.

The chief minister also condemned the police action on students at Jamia Millia Islamia in Delhi and said it should not have happened.

Slamming the BJP, Banerjee said the party should take care of the states it rules in Northeast before “lecturing others” on law and order.

“The centre had asked me whether I need central forces to control the situation. I have told them that I have full faith on my state police. The BJP is busy lecturing others but it should first take care of law and order situation in states where they are in power,” she said.

Banerjee also urged people of the state to send “lakhs of letters” to President Ram Nath Kovind, opposing the amended Citizenship Act and the NRC and, if needed, use “own blood instead of ink” to write them.

Banerjee, who has been at the forefront in opposing the NRC and the citizenship law, is leading mega rallies crisscrossing the city and neighbouring Howrah in protest against the law for three consecutive days, beginning with the Red Road-Jorasanko rally.

Governor Jagdeep Dhankhar dubbed the rallies as “unconstitutional and inflammatory act” and urged the chief minister to devote time to “retrieve the grim situation”.

Reacting on his behaviour Banerjee in the evening wrote to Governor Jagdeep Dhankhar saying it the governor’s obligation to support the state government to maintain peace and not aggravate the situation through his provocations.

Banerjee expressed her sadness over his taking to the Twitter frequently to criticise of her government and urged the governor to cooperate with it to maintain peace in the state.

“I am really sorry to see your frequent tweets and press briefings criticising the state government and also involving the senior officers of the state,” Banerjee wrote to Dhankhar.

Dhankhar asked Banerjee over the micro blogging site during the day to personally update him on Tuesday about the current situation in the state in view of the violence over the amended Citizenship Act.

He has been at loggerheads with the TMC government in the state soon after taking up office in July end over a number of issues and had taken to expressing his views a number of times over Twitter.

The governor had on Monday also expressed his displeasure on Twitter at the state’s chief secretary and the director general of police’s failure to turn up despite his summons to them to brief him on the prevailing unrest in parts of the state. He had described their absence as “unfortunate and unexpected”.

Banerjee in her letter said “You (Dhankhar) would no doubt appreciate that the prime focus of the state administration at present is to maintain peaceful situation as against what is going (on) throughout the country”.

“The (governor’s) constitutional obligation in my view is to support the state government machinery to maintain peace and harmony rather than aggrevating the situation by provoking elements who may attempt to disturb the order and tranquility,” she said.

“Please cooperate to maintain peace,” Banerjee added. Dhankar took to the Twitter yet agains to give his reply.

He tweeted, “My response to the letter of the chief minister has been sent. Looking forward to meeting her tomorrow. Urged her to work in tandem and togetherness in public interest and engage in soul searching”.

Dhankhar had summoned the two top officials of the state on Sunday. Top sources in the state administration said the chief secretary and the DGP would brief the governor at an “appropriate time”.

Violent protests over the amended Citizenship Act continued to rock parts of West Bengal for the third consecutive day.

Several incidents of vandalism and arson were reported from different districts.