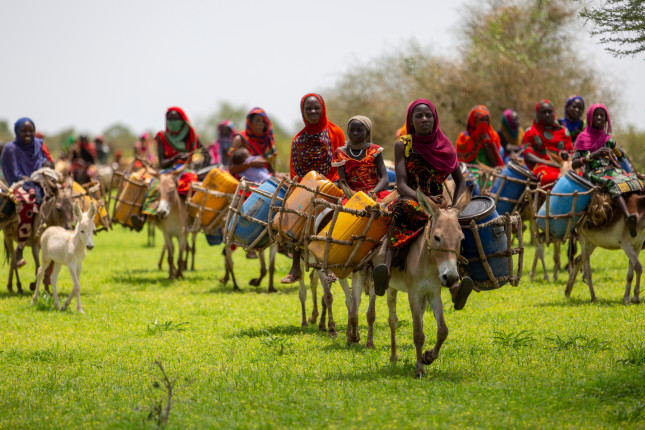 Water deprivation is increasingly recognized as a political and security problem. Tensions resulting from the growing imbalance between global water demand and supply can escalate into conflict. Efforts to solve water-related conflicts and promote water cooperation for peace, termed “water diplomacy” or “hydro-diplomacy,” continue to be male-dominated. Several recent events and related publications are contributing to bridging this persistent gender gap.

The UN estimates that at least one-quarter of the world’s population will live in water-scarce regions by 2050. In 2001, then-UN Secretary General Kofi Annan stated that “fierce competition for fresh water may well become a source of conflict and wars in the future.” Water insecurity can undermine regional and global partnerships and hinder foreign policy and geopolitical objectives. Conversely, water diplomacy has also been recognized as a potentially powerful tool for long-lasting international cooperation and peacebuilding. The Global Water Forum defines water diplomacy as “the use of diplomatic instruments to existing or emerging disagreements and conflicts over shared water resources with the aim to solve or mitigate those for the sake of cooperation, regional stability, and peace.”

In June 2017, the UN Security Council held a briefing on Preventive Diplomacy and Transboundary Waters emphasizing the role of water diplomacy and cooperation in conflict prevention. Later that year, 15 co-convening nations represented on the Global High-Level Panel on Water and Peace offered recommendations for a global hydro-diplomacy strategy for the 21st century. The resulting report, A Matter of Survival, concluded that existing International Water Law provides legal norms, principles, and institutions for expanded international water cooperation. However, more needs to be done to promote participatory decision-making—or “people’s diplomacy” as the report called it—including empowering women to increase their participation in water diplomacy.

Effective water diplomacy is increasingly urgent as changing climate and extreme weather events disrupt the management of the world’s shared water resources. It requires that we expand our conception of who the relevant decision-makers are and that we promote meaningful participation of all key stakeholders.

Globally, women and girls are responsible for water collection in 80 percent of households without water access directly on the premises. While women are responsible for water management at the household level, and even though their participation as water leaders at the community level has increased in recent years, they remain grossly underrepresented in the high-level diplomacy associated with transboundary water negotiations.

Since water management is conflict management, failing to include women as key stakeholders and decision-makers is a significant missed opportunity.  Further, empirical evidence shows that a balanced gender representation in peace processes results in agreements that are more durable and less likely to relapse. If women continue to be underrepresented in water diplomacy, these negotiations will fail to create a more inclusive and sustainable peace and even have the potential to trigger further social unrest.

Women as Water Diplomats on Regional, National, and Grassroots Levels

On March 15th, the Geneva Water Hub and the Global Water Partnership Mediterranean, launched a comparative study titled Empowering Women in Water Diplomacy in the Middle East and North Africa (MENA). This study applied a gender lens to decision-making on water security and transboundary cooperation. Findings reveal that women in the MENA region are largely absent from high-level water negotiations, despite their technical expertise and expanding human capital. MENA is one of the regions were resolving this issue is most urgent, for approximately 60 percent of the population lives in areas under severe water stress.

The following two days, SIDA Partnership Forum organized a Global Learning Event on “People and Planet: Gender, Environment and Climate in the 2030 Agenda,” in collaboration with several UN agencies and other European institutes. I spoke on a panel on the gender-climate-security nexus, facilitated by Ambassador Sparre, director of the Swedish Dialogue Institute for the Middle East and North Africa. I discussed my findings on “Gender, Climate Change, and Security Risks in Egypt with a Focus on Water,” based on fieldwork on Gender, Climate and Security: Sustaining Inclusive Peace on the Frontlines of Climate Change. Published by a partnership of UN entities, this report offers evidence that women who are on the frontlines of climate action across the globe play a vital role in conflict prevention and fostering a sustainable, inclusive peace.

Both the UN report and Geneva Water Hub study conclude that women’s contributions are not always recognized in high-levels discussions. Complementing these regional and global views, an interactive map maintained by the UN’s Joint Programme on Women, Natural Resources, Climate and Peace provides access to full-length reports of several countries. The critical importance of water is also recognized in a recently published study on The Climate-Gender-Conflict Nexus: Amplifying Women’s Contributions at the Grassroots. Among other recommendations, this report urges the promotion of women’s leadership in climate-related conflict mitigation and prevention by reducing barriers to inclusion.

These findings on women’s contributions can help policymakers, development practitioners, and peacebuilders mitigate the risks of environmental insecurity and promote resilient, inclusive, and peaceful societies. These initiatives demonstrate that ensuring a gender balance in water diplomacy creates opportunities to include women’s differentiated knowledge, diverse perspectives, and experiences. This gendered knowledge helps identify a broader set of solutions to water challenges by providing a more holistic understanding of water issues.

Women’s leadership in water governance has become even more critical given each of these current challenges. It is imperative to ensure that women from a diversity of backgrounds are able to participate in water negotiations and contribute to the design and implementation of water-related programs on an equal footing with their male counterparts.

This is particularly important in the MENA region where climate change is highly gendered in its impact on water resources, human health, food production and land use. When women can contribute to inclusive water diplomacy processes on every level, relations between nations sharing a freshwater resource are improved, and human security threats are mitigated.

Marisa O. Ensor is an applied environmental and legal anthropologist currently based at Georgetown University’s Justice and Peace Studies Program.