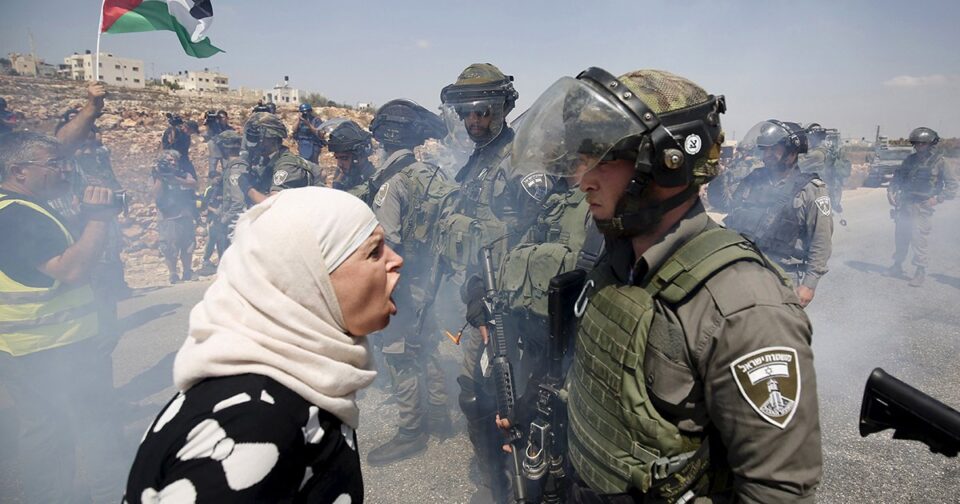 Israel is the most powerful state in the Middle East. Its military forces may not match the likes of Egypt or Turkey in numbers, but the might of its training, equipment, technologies and nuclear weapons make it unassailable. Given its long-developed capabilities in public order control, such a position should also apply to its control of radical dissent within its own borders, as well as in the Occupied Palestinian Territories.

Gaza may not be occupied in the conventional sense but it is a small territory with two million people living behind borders controlled by Israel. It lacks a port, its sole airport was destroyed many years ago and its Mediterranean coastline is patrolled by Israelis at all times. It is essentially an open prison.

The Israeli prime minister, Benjamin Netanyahu, has persistently claimed that his country is indeed safe, that it has nothing to fear from the Palestinians and that the settlements can and should expand as Israel has established good relations with key Gulf states.

More importantly, President Joe Biden’s administration has done little to repeal Donald Trump’s pro-Israel changes. There is no sign of moving the US embassy back from Jerusalem to Tel Aviv, the US consulate in East Jerusalem that gave Palestinians a direct link to Washington has remained closed since 2019, as has the Palestinian office in Washington since 2018. There has been little pressure over the settlement expansion, and even the United Nations Relief and Works Agency for Palestine Refugees in the Near East (UNWRA) has only had $230m of its previous $380m US financial support restored.

Taking all these elements into account, Israel should feel safe and secure – but in practice it doesn’t. Instead, an apt summary is of a state that is impregnable in its insecurity. It is impregnable in the sense that it cannot be defeated but insecure in that the underlying threats will not go away, as evident in the current violent confrontations.

The threats stem from the underlying anger in Palestinian circles, especially in the occupied territories, as Netanyahu’s government moves ahead to get more settlers into East Jerusalem. This is seen in Palestine as straightforward ethnic cleansing, further encouraged by the far-Right Jewish parties that Netanyahu depends on for power.

The extremist Jewish ideology behind the Kahanist movement in Israel that seeks something approaching full ethnic cleansing of the land west of the Jordan, is still very much in the minority. Nevertheless, it is there in the background, aided by the growth in numbers of some of the more rigorous religious elements.

As the social unrest came to a head this week, many hundreds of young Palestinians were injured but their demonstrations continued and the Israeli police took the extraordinary step of entering al-Aqsa Mosque, Islam’s third holy place. This provoked outrage in the territories, in Gaza, and among Israeli Arabs who make up a fifth of the population of Israel, as well as across the wider Islamic world.

Widespread violence has broken out, leaving many people injured. Much of it has been instigated by Jewish youth, while Islamic paramilitaries in Gaza have fired numerous unguided rockets towards towns in southern and central Israel, including the port of Ashdod and the city of Tel Aviv.

The Israelis, in turn, have carried out hundreds of airstrikes and drone attacks on Gaza, already killing well over a hundred people, many of them children. Israeli casualties are tiny in comparison but the psychological threat of missile attacks is affecting millions of Israelis as they head for shelters, night and day. That should not be underestimated and Netanyahu’s claim of victory seems increasingly hollow.

Unless the violence dies down very soon, Netanyahu will look to take firm action to regain control of Israeli towns, including multiple arrests to deter rioters. Such domestic action will do little to reassure people that all is well, and the situation in Gaza and East Jerusalem only adds to the instability that such action induces.

Israel’s problem in Gaza is that it cannot prevent the rockets being fired without a military ground force intervention. However, the last time it sent in troops, during ‘Operation Protective Edge’ in July 2014, they came up against determined paramilitaries who knew the urban areas intimately and had long trained in urban guerrilla warfare.

As my column explained at the time, 12 days into the seven-week war, Israeli troops moved into Gaza to destroy cross-border tunnels and rocket launch sites. On the first day of that operation, 20 July, “…the elite Golani brigade lost 13 men killed and well over 50 injured. The dead included a battalion deputy commander and the wounded the brigade’s commanding officer, Colonel Ghassan Alian. The overall level of resistance, and especially the abilities of the Hamas paramilitaries, came as a shock to the Israel Defense Forces (IDF), even as it was coming to realise that the tunnels constituted a far more serious problem than expected.”

Eight days later, when hundreds of Israeli troops were operating within Gaza, a Hamas paramilitary unit used an undetected tunnel to cross the border and kill five young IDF sergeants on a leadership training course, losing one of their own men in the operation. Rockets continued to be fired from Gaza throughout the war, killing six people, including a child.

In Gaza, the Palestinian losses were vastly greater. Amnesty International later reported that more than 2,000 Palestinians had been killed during the seven weeks, including more than 500 children, and more than 10,000 people had been injured.

Shift to the Right

Over the course of that 2014 conflict, the Israelis lost 68 troops, while several hundreds were left wounded, some maimed for life. Yet, when a ceasefire was eventually agreed, IDF sources accepted that Hamas still had 3,000 rockets available, an arsenal that will have increased massively in the past seven years.

IDF leaders may believe that they have since prepared their forces much more effectively for ground operations. However, that same belief after the 2008 ‘Operation Cast Lead’ conflict didn’t stop them failing six years later. Netanyahu, though, has little option but to take action now, not least because of the changes in Israeli politics over the last ten years.

Prior to the events of the past month, Netanyahu had worked hard to convince Israelis that the Palestinians had been defeated and Israeli Jews could feel secure. This narrative was supported by a 40-year shift to the Right in Israel, propped up by the influx of close to a million migrants from Russia and Ukraine in the 1990s, who were understandably determined to be secure in their new country. It was also aided by the near-wholesale privatisation of the Kibbutz and Moshav cooperatives across Israel that had often provided a more liberal outlook.

Furthermore, the idea that the Palestinians had lost and had to get used to it was promoted vigorously by sectors of the Israeli lobby in the United States, most notably the Middle East Forum. And the many millions of Christian Zionists in the US are an ever-present influence on aspiring politicians, both Republican and Democrat.

On the surface, Israel still appears secure but for all its military power, this is far from true. It may seem impregnable but remains fundamentally insecure. Perhaps the current conflict will ease, possibly due to late pressure from Biden, but whether or not it does, the one key event of recent weeks is the incursion of the Israeli forces into al-Aqsa Mosque. That will have a far deeper and more longer-lasting effect than associates of Netanyahu realise.