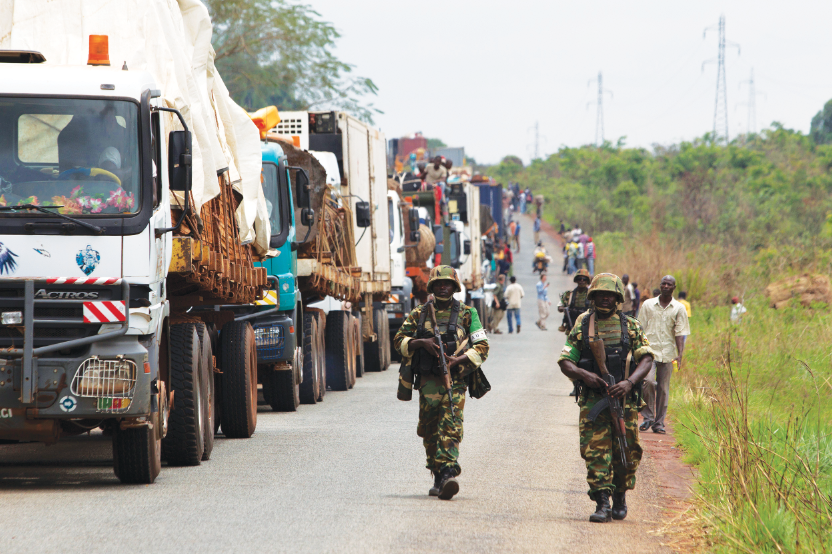 In October Nigeria closed its borders to the movement of goods. The move, aimed at curbing smuggling, has led to price rises, while critics claim that it threatens free trade across the region. Linus Unah reports.

The unexpected nature of the announcement gave traders and communities little time to prepare for the economic shock that followed. In October, Nigeria – which shares boundaries with Benin, Niger and Cameroon – closed all of its land borders to the movement of goods in a bid to tackle smuggling.

“All goods, for now, are banned from being exported or imported through our land borders and that is to ensure we have total control over what comes in,” Hameed Ali, the comptroller-general of the Nigerian Customs Services, told journalists in Abuja in October.

The federal government had initially imposed a partial closure of its borders in August to facilitate a joint operation, named Swift Response, involving customs, immigration, police, and army officers. The borders will now remain closed until at least 31 January.

At the heart of the problem, according to the government, is the smuggling of rice and illicit exports of cheaper, subsidised petrol from Nigeria to its neighbours. According to the Major Oil Marketers Association of Nigeria some 10-20% of Nigerian fuel is smuggled abroad.

The move has boosted government revenues because more duties are being collected on the increased volume of goods entering the country legally through the ports. However, the fall in the supply of rice has led to food price inflation, which has impacted strongly on consumers.

The closure has also led to shortages of materials imported from Nigeria in neighbouring countries and concerns about the consequences for the liberalisation of trade.

Experts say that the measures are in breach of the protocol on the free movement of goods, services and people established by the Economic Community of West African States (ECOWAS), to which Nigeria belongs and in which it wields significant political and economic clout.

Moreover, Nigeria’s unilateral action comes two months after it reluctantly signed the African Continental Free Trade Area (AfCFTA), which aims to remove barriers to trade and promote the free flow of goods, services and people across the continent.

“The border closure is inconsistent with Nigeria’s multilateral commitments, including ECOWAS and the AfCFTA, and is a major disruption to Nigeria and the entire region,” says Ryan Musser, programme officer with the Centre for International Private Enterprise.

“This will surely frustrate the momentum of removing trade barriers in the region and across Africa. It undermines the systems agreed to and destroys trust and goodwill.”

Federal authorities say neighbouring countries are not doing enough to enforce regional protocols on the transit of goods. The government of President Muhammadu Buhari, which has pursued a range of protectionist economic policies, worries that allowing cheaper imports will undermine efforts to push Nigeria towards self-sufficiency in local production. Since 2015, the Central Bank has placed restrictions on the sale of foreign exchange for the importation of 41 products, including rice, palm oil, beef, toothpicks, textiles, tomatoes and cement.

Take rice, a heavily consumed staple. Domestic production in 2018/19 was just 3.7m tonnes, or about half of the local demand, according to the US Department of Agriculture. Since 2015, the government has provided incentives, including credit and inputs for farmers, but supply is yet to equal demand. Instead, traders cash in on the supply gap to bring rice either officially through the ports or illegally via land borders.

Since Nigeria does not have the capacity to meet local demand for rice yet, “any attempts to simply curb imports will result in more smuggling and a spike in prices for local consumers, as immediate supply tries to meet demand,” says Musser.

In late October the Punch newspaper reported that the price for a locally produced 50kg bag of rice rose from N16,000 ($44) to at least N22,500 in a major market in Lagos.

Nigeria’s porous borders, government officials argue, allow traders to escape excise duties and tariffs and fuel illegal smuggling. To reduce fuel smuggling, customs officials last month banned the supply of petroleum products to filling stations within 20km of the borders. Together, these measures are taking a toll on border communities, businesses and the economies of neighbouring Benin and Niger.

Markets in border communities have shut since the closure of the borders, and the steady flow of motorcycle taxis, trucks and passengers which keep these areas buzzing has drastically reduced.

“We are really suffering here,” Raji Abidemi, a resident of Badagry, near the border with Benin, said, citing the rapid decline in the trade of secondhand clothing, used cars, charcoal, frozen poultry products and grains. The price of petrol has more than doubled, and motorcycle taxi drivers have also tripled their price, she said. Small stores dependent on cross-border traders are folding up.

SBM Intelligence, a Lagos-based political and economic risk advisory firm, has warned that the closure of boundaries also has consequences for export-focused Nigerian businesses.

“Nigerian authorities assume that a border closure works only one way – on the import side. But it bears reiterating that the country is actually a net exporter via the land borders and this closure affects these exporters.”

A recent report by FSDH Merchant bank found that some textile firms in the northern city of Kano have closed shop because they cannot export to clients across the border with Niger.

Critics say the closure of all land borders is not of itself a solution. Residents of communities near the border with Benin told African Business they still buy smuggled rice, even though this comes at a higher price.

SBM believes Nigeria’s porous borders reflects a “failure” of the Nigeria Customs Service to effectively carry out its duties.

Nigeria is also moving away from a heavy reliance on physical monitoring of entry points. In late April, the government approved N52bn for electronic monitoring of 86 border posts and over 1,400 illegal routes to tackle smuggling and criminality.

“Nigeria needs to strengthen its border by increasing the capacity of border agents to do their job well and enforce laws and regulations effectively,” says Musser. This requires professionalising staff, creating systems of accountability that discourage corruption among border officials and pushing for the implementation of a common external tariff among ECOWAS states, he adds.

“This would likely lead to a better outcome than the blunt, short-sighted reaction of border closing, and instead it would lead to a better long-term outcome and strengthen ECOWAS as a trade body, as well.”