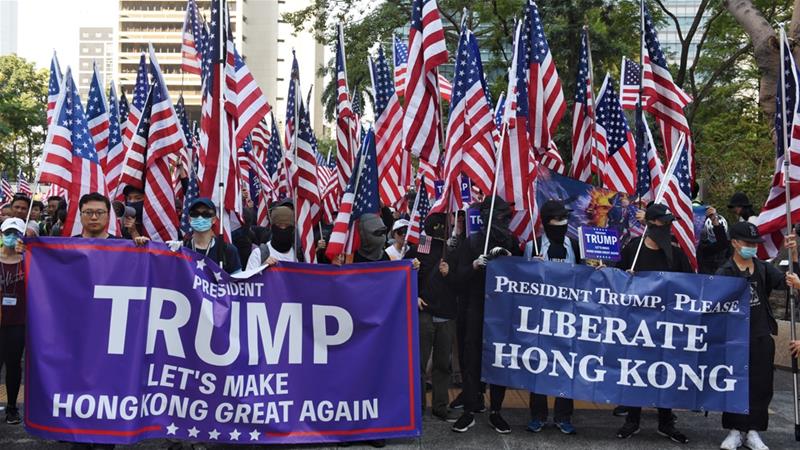 Sanctions by China follow the US President Donald Trump signing into law the Hong Kong Human Rights and Democratic Act.

China has suspended US warship visits and sanctioned several American non-government organisations in retaliation for the passage of a bill backing pro-democracy protesters in Hong Kong.

“In response to the unreasonable behaviour of the US side, the Chinese government has decided to suspend reviewing the applications for US warships to go to Hong Kong for [rest and] recuperation as of today,” foreign ministry spokeswoman Hua Chunying said at a regular news briefing on Monday.

“We urge the US to correct the mistakes and stop interfering in our internal affairs. China will take further steps if necessary to uphold Hong Kong’s stability and prosperity and China’s sovereignty,” she said.

Last week, US President Donald Trumpsigned the Hong Kong Human Rights and Democracy Act, which requires the president to annually review the city’s favourable trade status and threatens to revoke it if the semi-autonomous territory’s freedoms are quashed.

The move came as the world’s two biggest economies have been striving to finalise a “phase one” deal in their protracted trade war.

China had already denied requests for two US Navy ships to dock in Hong Kong in August, without specifying a reason why.

The last US navy ship to visit Hong Kong was the USS Blue Ridge in April, before the mass protests broke out in June.

In more normal times, several US naval ships visit Hong Kong annually, a rest-and-recreation tradition that dates back to the pre-1997 colonial era which Beijing allowed to continue after the handover from British to Chinese rule.

Hua said they would also apply sanctions to a number of US-based NGOs, although she failed to give any specifics over the form the measures would take.

Sanctions will apply to NGOs that had acted “badly” over the recent unrest in Hong Kong, she said, including the National Endowment for Democracy, Human Rights Watch and Freedom House.

Foreign NGOs are already heavily restricted in China, and have previously received sharp rebukes for reporting on rights issues in the country including the mass detention of Uighur Muslims in Xinjiang.

“They shoulder some responsibility for the chaos in Hong Kong and they should be sanctioned and pay the price,” said Hua.

“Operationally, from a military point of view, it doesn’t really make a difference for the US, as they can use many naval bases in the region,” Michael Raska, a security researcher at Singapore’s Nanyang Technological University, told AFP news agency.

However, it “sends a signal that US-China tensions will continue to deepen,” Raska sai