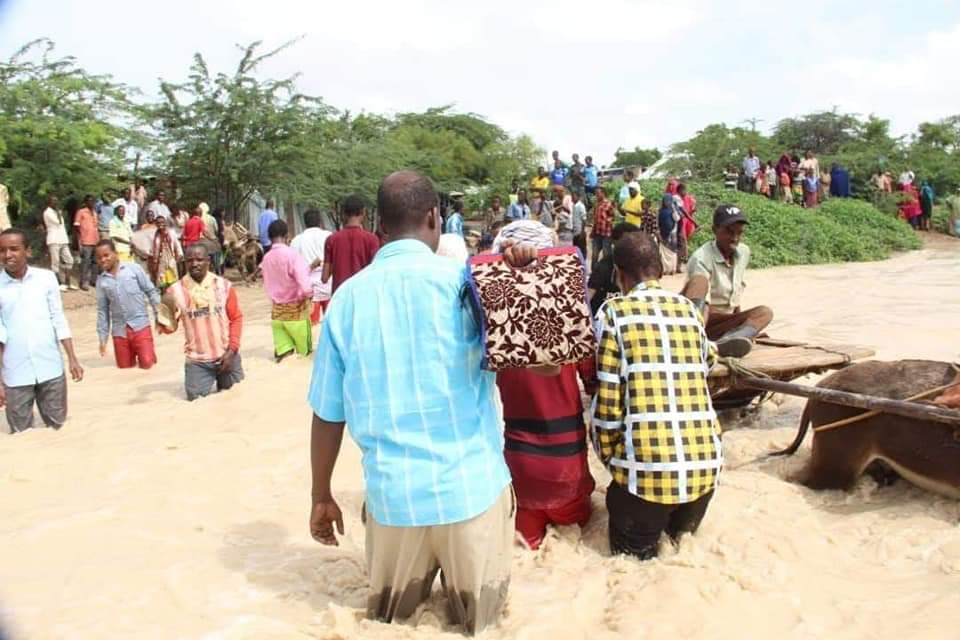 Ibado Mohammed Abdulle from Sool Region of Somaliland is a counsellor, friend and campaigner for women who have been made refugees in their own country by the impact of the climate crisis

The long, black hem of Ibado Mohammed Abdulle’s diya drags in the sand, creating mini tornadoes of dust under her sandals. At a circular fence of waist-high thorny bushes, she knocks on the metal sheet serving as a makeshift door. A woman’s face, partially hidden by a bright green hijab, appears. “Salaam Alaikum,” Abdulle says, “peace be upon you.”

Holding up a hand to the armed guards tasked with accompanying the visiting charity staff following her around the displacement camp, she instructs them to stay outside.

Abdulle, 48, was living in the desert town of Oog in northern Somalia in 2016 when drought turned the region to dust, driving thousands of families from their homes. Now she makes daily visits to one of three sprawling displacement camps outside the town to campaign for vulnerable women and girls. Once a climate refugee herself, she knows what their lives are like.

“I tell them to gather in groups when they go out,” Abdulle says. “That most of the men are your enemies, so don’t go out alone so you can be safe from the violence and the rape, especially at night-time.”

In Somalia, climate change is driving rape, sexual violence and intimate partner violence. Droughts linked to climate change ravage the landscape with increasing frequency, hurting families who depend on farming and herding animals.

Camp conditions are hazardous for women: there is no lighting at night, and no doors or fences to keep out opportunistic criminals and predators. As drought continued in 2017 and 2018, the population in Oog’s camps boomed. And crimes against women and girls mounted.

While updated statistics are hard to come by, at least 25% of Somali women have experienced gender-based violence exacerbated by conflict and displacement due to the climate emergency, World Bank data shows. Much of this violence happens in displaced communities.

Research from Oxfam suggests women in Somalia are most at risk when walking to collect water and firewood, using outdoor toilets and sleeping in makeshift huts that lack doors and lighting. The perpetrators come from both inside and outside the camps. The government, fragile and under-resourced, cannot provide protection and services to the nearly 2.6 million Somalis already displaced.

Abdulle has sought to help local women and girls protect themselves by organising groups to collect water and firewood. She has also coordinated forums, groups of volunteers who meet to learn how to campaign for their needs and rights. She also acts as a counsellor and friend for women who have been attacked.

In the blazing afternoon sun, with strong winds kicking up fierce dust storms, the makeshift tents in the displacement camp look identical: round huts propped up by sticks and covered in a patchwork of faded, old cloth. But Abdulle knows the women living in each one and navigates between the huts with ease.

Sukhra Idris, her name changed to protect her privacy, lives alone in this camp with her two children. When Abdulle enters, she greets her with a hug.

The lines around her eyes make Idris look older than her 23 years. She was married at 17 to a man from a wealthy family.

“I met a boy and fell in love and felt I was ready for marriage,” Idris says, pulling up the bright green hijab as her young child tugs from her head. “I was in a hurry for that because I was very young.”

When the 2016 drought hit, the couple’s livestock transportation business was ruined. . According to experts, men unable to provide for their families often become more prone to domestic violence. Idris says her husband began to abuse her, slamming her against a wall, punching and slapping her.

“I told him to do his own work because we didn’t have enough to eat and needed to support old people like my mom and dad,” said Idris. “At that time, he was beating me if I asked him to bring milk for his kids.”

Idris tried several times to leave, but social stigma pressed her to return. It was only with Abdulle’s support that Idris was able to leave for good. She struggles to survive with her children in the displacement camp and one has died from diarrhoea.

After a long day, Abdulle visits Oog’s only hotel to sit beneath the shade of a tree and sip a cup of camel milk tea. With climate change intensifying and droughts increasing in the region, Abdulle knows she alone cannot meet the overwhelming needs of all Somali women and girls. Her greatest hope is that the displaced women she is helping to train and empower will pick up the fight.