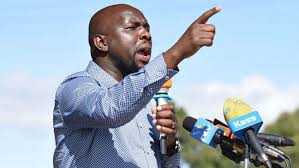 Senator says the Shilling will keep falling and Kenyans shall pay heavily.

• Murkomen says investors are already on a wait and see state.

• Senator claims that the animosity between President Uhuru Kenyatta and his deputy William Ruto is not just a turmoil in Jubilee but also a political risk.

Elgeyo Marakwet Senator has claimed that the animosity between President Uhuru Kenyatta and his deputy William Ruto is not just a turmoil in Jubilee but also a political risk.

Via Twitter on Monday, Murkomen said the animosity will hit Kenyans hard.

He added: “It’s terrible. Being a nation that has borrowed heavily, the Shilling will keep falling and we shall pay heavily. Investors are already on wait and see state.”

Last week, the Kenyan shilling remained unchanged against the US dollar, to close at Sh108.5 similar to what was recorded the previous week.

President Uhuru Kenyatta appears to have shoved DP William Ruto from the centre of power after stripping him of his allies in Parliament and reducing his functions and funding.

Legal experts say there are no fixed timelines for the start of presidential campaign vote hunt.

The DP’s relentless scouring for 2022 support has put him on a collision cause with the President, who says early campaigns disrupt his development agenda.

UhuRuto’s relationship is now characterised by hard-hitting remarks targeted at each other. The one-time unified Jubilee is in a shambles and the Cabinet deeply divided.

By granting the CS supervisory roles across government, the President whittled his principal assistant’s influence and in essence, ended his countrywide tours to launch and commission state projects