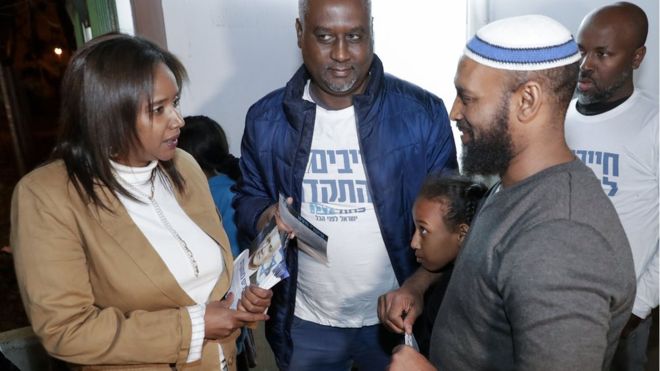 Pnina Tamano-Shata, a former journalist, was the first Israeli MP born in Ethiopia

Pnina Tamano-Shata has been chosen by incoming deputy prime minister Benny Gantz, who is forming a unity government with PM Benjamin Netanyahu.

The new government is expected to be sworn in on Sunday after a delay over ministerial appointments.

Incidents of police using force against Israelis of Ethiopian origin – including fatal shootings – have led to street protests and clashes in recent years.

The 140,000-strong community is among the poorest in the country and suffers from high rates of unemployment.

However, many second generation Ethiopian-Israelis have become successful across society, achieving notable positions in the military, judiciary and politics.

Pnina Tamano-Shata, who belongs to Benny Gantz’s centrist Blue and White party, has been named as immigration minister.

The 39-year-old came to Israel at the age of three as part of a dramatic evacuation of Ethiopian Jews from Sudan nicknamed Operation Moses.

She, her five brothers and her father were among almost 7,000 Ethiopian Jews airlifted out of the country by Israel between November 1984 and January 1985. Her mother followed several years later.

“For me, this is a landmark and the closing of a circle,” Ms Tamano-Shata told Israeli newspaper Maariv. “From that three-year-old girl who immigrated to Israel without a mother on a cross-desert foot journey, through growing up in Israel and the struggles I led and am still leading for the community, integration, the acceptance of the other, and against discrimination and racism.”

In the early 1980s some 16,000 Ethiopian Jews walked by foot from their homes in northern Ethiopia to get to Sudan and onward to Israel. They – as well as non-Jewish citizens – were barred from leaving Ethiopia, so they made the journey in secret. About 1,500 died on the way or in refugee camps in Sudan.

Sudan – a Muslim-majority country and part of the Arab world – was an enemy of Israel at the time, and the evacuation was carried out clandestinely. The first operations to bring Ethiopian Jews to Israel were carried out by the Mossad, Israel’s secret service, in a series of daring actions from 1980.