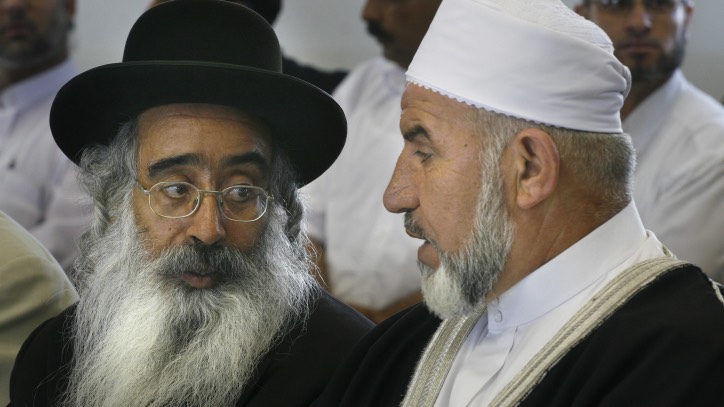 On the importance of dialogue

A rabbi and a sheikh at a prayer session for Muslims and Jews in Gush Etzion.
(photo credit: ELIAZ COHEN)

I heartily endorse the Jerusalem Post article (August 30, 2017) by Ron Kronish and Mohammed Daoudi Dajani advocating Jewish- Muslim dialogue. In my own way I have been saying the same thing for 50 years, urging the councils of Christians and Jews to broaden their scope and include Islam on their agenda. It was never going to be easy. Jews and Christians have their own relationship issues that need to be addressed separately from those involving Muslims, though that did not prevent the creation of JCM – Jews, Christians and Muslims in Europe.

The expansion of Islam has taken most of the world by surprise.The direction it has taken has also puzzled many people who were brought up on what The Arab Mind by Raphael Patai calls “an incurable romanticism… a life-long attachment to Araby.”In all three monotheistic faiths there is a plague of ignorance.Adherents were and are largely ignorant of the tenets, values and practices of the others. There is a plague of internal ignorance too: Jews know little Judaism, Christians know little Christianity, Muslims know little Islam. The first and most pressing need is education, including the Jewish, Christian and Islamic influence on each other.There is a methodological problem.

Dialogue – on every level – requires training and sensitivity. In Western religions this is in course of development. Jews and Christians – with occasional slip-ups – engage in the art with mutual respect and without fear. Muslims, despite their long and honorable intellectual tradition, still lack this technique. It was revealing when I taught a university course in Jewish thinking at an Australian university to have Muslim students who said, “Our tradition faces many of the same issues but we’re not sure we are ready to discuss them with you.”

These issues include the existence and nature of God, the doctrines of sin and atonement, messianism and life after death, holiness, faith and law, prayer and prophecy.

I would like to know how accurate Alfred Guillaume is when he says in his Penguin book, Islam, that “the difference between them [Islam and other faiths] lies rather in what Islam denies than in what it affirms.”

By definition, dialogue respects the right of the other person and their faith to their own conscience and commitment. But there is a theological fuzziness about it. Islam is adamant that it is the original and the best. Jews see Judaism as the real truth. Christians think likewise about Christianity. For pragmatic reasons Judaism and Christianity have apparently decided to leave to God the final answer to the question of absolute truth. Whether this approach will commend itself to Islam remains to be seen.

They more or less begin on the same page. Jewish and Islamic narratives both honor the patriarch Abraham. Where they part company is with regard to Abraham’s sons.

In Judaism it was Isaac, and in Islam his half-brother Ishmael, whom God specially honored. There is historical rivalry and hostility between the brothers, though in the Jewish story the two are eventually reconciled.

Sibling struggle is not new. It punctuates the Scriptures. Apart from Isaac and Ishmael, there are Cain and Abel, Jacob and Esau, and Joseph and his brothers. Each generation has sibling jealousy, simmering resentment, parental favoritism.

Each also has unique features such as competing self-images, a father’s gift to one son but not the others, poor family communication, and years of alienation.

We see little reconciliation. The Jewish text Avot d’Rabbi Natan asks, “Who is a hero? One who turns an enemy into a friend.” In the Jewish story, Abraham tries to teach Ishmael ethics but worries about him. The boy becomes a mocker who taunts Isaac. Abraham’s wife Sarah supports Isaac. Abraham wavers and finally banishes Ishmael’s mother Hagar and her son. The two sides of the family go their separate ways.

History is torn by conflicting narratives.

In the Jewish view the two sons will not struggle for ever. Is there is a similar hope within the Ishmael tradition? Is it more likely to uphold the inexorability of holy war? Ahmad Shboul, a university academic in Sydney, said that jihad is more defensive than aggressive, and Muhammad saw the great jihad as the individual’s struggle with his own conscience.

These days Islam has a new sense of confidence. Already in the 1960s Andre Malraux wrote: “The violence of the Islamic upsurge is the major phenomenon of our age.

Underestimated by most contemporary observers, the rise of Islam is comparable to the beginnings of Communism in Lenin’s time.”

The popular view is that an Islamic monolith is poised against Israel, America and the West as a whole.

In the past there were times of apparent harmony and coexistence, when it worked better to be on speaking terms. But the supposed medieval Golden Age is largely a myth. Even if it wasn’t, occasional pockets of coexistence do not prove very much.

The cultural dimensions of all the faiths include rationalist and less rationalist threads in all three faiths. In Judaism the rationalist Maimonides does not have the floor to himself: there is colorful folklore too. Islam has its vivid pleasures and palaces that seem to outweigh the rigorous intellectual aspects.

Sensual rewards like heavenly virgins cannot be dismissed from the equation, though some Islamic teachers prefer a less colorful notion of paradise.

Criticisms of Muhammad’s habits and faults offend Muslims much more than midrashic critiques of biblical figures worry Jews. Montgomery Watt says in Muhammad: Prophet and Statesman that “it is not surprising that [Muhammad] is reported to have been assailed by fears and doubts.” Jews wonder how far a modern Muslim is allowed to have “fears and doubts” while remaining true to Islam. They also wonder how far the Islamic jurists are prepared to go in adjusting their faith’s practices to the ostensibly more civilized principles of modern legal systems.

The big question is whether the two faiths can be neighbors living together despite the hostility and suspicion in the atmosphere. Or are the two faiths doomed to struggle together to the end of time? Judaism seems to have a hopeful answer, but does Islam? Can the Koran, which often uses Jewish midrashic material, find (or at least seek) an Islamic version of the Midrash about the reconciliation of the brothers? Can it echo Rabbi Mordekhai HaCohen’s prayer for Sukkot: “Our Father in Heaven! Our ancestors in ancient days used to offer to You seventy sacrifices for the well-being and peace of the nations of the world. We, Your people of the sovereign State of Israel, pray to You from Jerusalem, the city of peace, from Zion, the abode of Your holy Presence: have mercy on the world and its lands and nations, and prevent war from destroying Your world. We implore You, King of Peace, grant brotherhood among the nations, that all should join the covenant of peace, as foreseen by the holy prophets in their vision for the end of days”?

The author is emeritus rabbi of the Great Synagogue, Sydney.