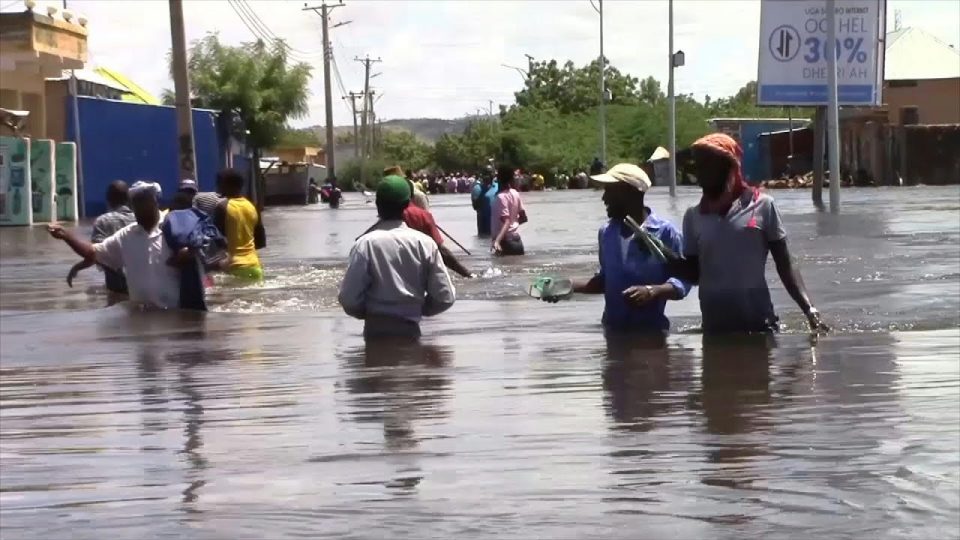 • More than 105,000 people have been affected by floods since late June in Hirshabelle, South West, Jubaland States and Banadir region.

• More than 40 villages have been flooded especially in Balcad district in Hirshabelle State and Afgooye district in South West State.

• At least 33,000 hectares of farmland has been inundated; shelters, latrines and water wells have been damaged.

Heavy downpours in Somalia have triggered a new wave of riverine and flash flooding, affecting more than 105,000 people and inundating thousands of hectares of farmland in Hirshabelle, South West and Jubaland States. In Banadir region, four IDPs died and hundreds have lost shelters.

Initial reports from Middle Shabelle region, Hirshabelle State, indicate that between 14 and 15 July, more than 15,000 people were displaced by the new floods. Nearly 20,000 hectares of crops were inundated in 21 villages in Balcad district, of which eight villages are still flooded. Most displaced people are arriving in Balcad town despite concerns that the town may also flood.

In addition, flash floods affected nearly 51,600 people between 24 June and 4 July, and destroyed 13,000 hectares of vegetable crops in 23 villages in Balcad district following the spillage from a water reservoir, 30 km north of Balcad town. The district also experienced destruction of crops during the Deyr season in 2019. In total, from May to July, floods have affected more than 311,000 people and damaged 147,579 farmlands in Jowhar, Balcad and Mahaday districts of the Middle Shabelle region. The presence of mosquitoes has reportedly increased in the flood-affected districts, leading to concerns over a possible malaria outbreak.

In Lower Shabelle region, South West State, an estimated 30,500 people have been affected, of whom 27,000 people are displaced from their homes. Heavy downpours in the first two weeks of July triggered flash floods in Afgooye district. On 5 July, the riverbank broke in Balguri, Damaley, Raqeyle and Aytire villages in Afgooye, flooding the villages and affecting 6,500 people, of whom some 3,000 were displaced from their homes. Five houses were damaged, along with 20 latrines and 13 shallow wells. In Wanlaweyn district, the floods displaced 24,000 agropastoral people in Bulomamow, Lulutooy, Harbiga, Eeribka, Sigole, Gololey, Gololka and Eeribka Mad Aliyow villages. In May, 10,000 people were affected by Gu’ seasonal floods in these two districts, of whom 2,000 were displaced. There are concerns of further flooding from open river breakages as the Deyr rains season approaches. An estimated 20 plus potential breakage points exist in Lower Shabelle region.

Heavy rains in late June in Kismayo, Jubaland State, have affected 8,400 people, of whom 3,000 were displaced. On 30 June, the Jubaland Ministry of Planning and International Cooperation appealed to humanitarian organisations for assistance, noting that at least 350 latrines were damaged leading to fears of an AWD/cholera outbreak. The Kismayo main road was completely inundated, disrupting movement and local businesses. Kismayo town has poor drainage and road networks and usually experiences flash floods during the rainy seasons. Another 3,000 people were displaced on the outskirts of Kismayo town – along the Kismayo, Jamaame road at Barsanguuni, Bulagaduud and Singlayr – following heavy rains and floods earlier in June. In May, following heavy rains in Kismayo district and surrounding areas, approximately 57,360 people were affected by floods, of whom 32,220 were displaced; 269 latrines and 32 houses were destroyed.

Rains and strong winds were reported on 18 July along the Jubaland State coastline impacting 20 families and destroying their homes in Kudhaa, Burkabo and Raskamboni in Badhaadhe district. The winds have disrupted livelihoods for fishermen with small boats during the past two months. The authorities in Somaliland issued an alert on the same day warning residents of the rains and winds which are moving northwards. More destruction of shelters and displacement are expected and needs for emergency shelter, food, emergency WASH and health are anticipated.

In Banadir region, flash floods caused by heavy rains in early July have displaced over 700 IDPs in Hodan district after their settlement was completely submerged, forcing them to seek shelter outside as the rains continued. During the second week of July, flash floods destroyed over 100 IDP latrines and about 50 houses in Daynile and Kahda districts. More than 30 IDP settlements reported stagnant water inside houses forcing IDPs to stay outside and wait for the water to drain. Main roads have become impassable in Mogadishu creating challenges for the movement of p eople and supplies. On 14 July, four IDPs were killed after a huge wall fell and destroyed their house during rains at night. Heavy rains have also destroyed unidentified number of buildings in several districts in Banadir.