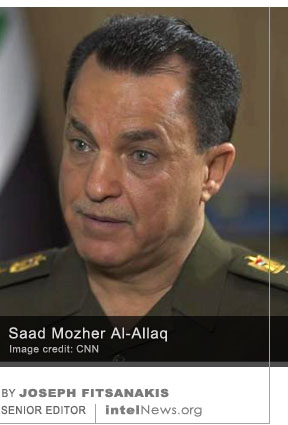 In a rare interview, the head of Iraq’s military intelligence has warned of an impending “catastrophe” as the Islamic State continues to edge ever-closer to rebuilding its networks of fighters and supporters in the Middle East. Lieutenant General Saad Mozher Al-Allaq, head of Iraq’s Military Intelligence Directorate, gave a rare interview to the American news network CNN, which was aired on Monday.

In his interview, General Al-Allaq claimed that his agency was able to intercept recent communications from senior operatives of the Islamic State —also known as the Islamic State of Iraq and Syria, or ISIS. The communications allegedly refer to “Operation BREAK DOWN THE FENCES”, which he said is a plan by ISIS to storm numerous prisoner of war camps that are located across northwestern Iraq and Kurdish- or Turkish-controlled northern Syria. These camps hold as many as 10,000 men, many of whom are believed to be ISIS fighters. Other camps hold nearly 100,000 women and children who are connected to male ISIS fighters. According to General Al-Allaq, ISIS seeks to rebuild its powerbase in the region by freeing and re-arming these prisoners.

In addition to guarding against the possibility of a mass exodus of alleged ISIS prisoners and their families, the Iraqi spy chief said that his force has been working with Turkish authorities to neutralize networks of ISIS operatives in Turkey. Several senior ISIS “emirs” —senior members of the organization, with significant political influence and funding power— were able to bribe smugglers to take them to Turkey, where they are currently reorganizing the militant group’s illicit networks. The Iraqi government recently notified Ankara of the whereabouts of nine such ISIS “emirs”, said Al-Allaq.

The Iraqi spy chief concluded his interview by warning of an impending “catastrophe”, should ISIS be able to implement Operation BREAK DOWN THE FENCES and rebuild its support base in the region. Representatives of the Turkish government told CNN that Ankara was looking into the Iraqis’ allegations of ISIS “emirs” operating inside Turkey.