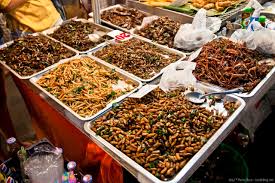 It may seem unpalatable to some, but creepy crawlies such as crickets, caterpillars and silkworms could be the future of food.

According to the Food and Agriculture Organization of the United Nations (UN), insects that are edible “contain high quality protein, vitamins and amino acids for humans.”

As well as their nutritional value, eating insects has less of an impact on our planet than more conventional sources of protein.

The FAO states that they possess a “high food conversion rate,” citing the example of crickets, which require “six times less feed than cattle.”

On top of this, insects emit less greenhouse gases and can be cultivated on organic waste.

In France, one company is now looking to harness the potential of insects on a large scale. Ynsect has been experimenting to find the best types of insects for producing powdered insect protein in bulk.

“Ynsect has been working on many insects in its research and development lab, but has selected one species to go on the market first, it’s a small beetle, called mealworm,” Antoine Hubert, CEO of Ynsect, told CNBC’s Sustainable Energy.

“We can find it almost anywhere in the world. Its composition is really good for fish and poultry, they really like it,” Hubert added. Currently, Ynsect are focusing on the fish farming market.

As western palates become more aware of the potential of insects as a nutritious source of food, could traditional sources of protein be on their way out?

“Livestock has a big environmental footprint, but it also plays important roles, positive roles,” Olivier Dubois, from the Food and Agriculture Organization of the United Nations, said.

“For example, it [livestock] makes some proteins and key nutrients like zinc and iron more available than through plants,” he added.