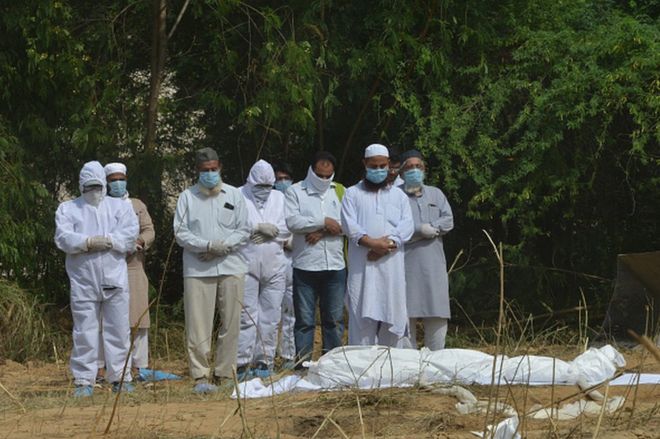 They talk about the “mystery behind India’s lower death rates” from the Covid-19 infection, and say that India is “bucking the coronavirus trend”. One talks about the “Indian exception as death rates in major Indian cities are lower compared to global coronavirus hotspots”.

Nearly two months after its first recorded case, Covid-19 infections in the world’s second most populous country have passed 27,000, with more than 800 deaths.

One way to understand the death rate is to track how many days it takes for total deaths to double.

In India, this is currently at nine days – there were 825 confirmed deaths on 25 April; compared to about half or so of that number on 16 April.

Experts say that’s good news. The doubling time for deaths in New York at the same stage of the pandemic was only two or three days, they say.

Many public health professionals and doctors say India’s grinding lockdown, which lasted more than a month, could have kept infection and deaths in check.

The medical journal Lancet says the “lockdown is already having the desired effect of flattening the epidemic curve”.

Others believe that India’s predominantly young population is helping keep fatalities low – elderly people have an elevated risk of death from the infection.

Yet others talk about the possibilities of the presence of a less virulent strain of the virus in India, along with the possibility that its hot weather was diminishing the contagion. Both these claims are not backed by any evidence. In fact, doctors treating critical Covid-19 patients have told me that the contagion is as virulent here as has been reported elsewhere in the world.

So is India an outlier when it comes to novel coronavirus fatalities?

“To be totally frank, I don’t know and the world doesn’t know the answer,” Indian-American physician and oncologist Siddhartha Mukherjee told journalist Barkha Dutt recently. “It’s a mystery, I’d say and part of the mystery is we are not doing enough testing. If we tested more then we’d know the answer.”

He is alluding to both diagnostic tests which determine those who are currently infected and antibody tests to find out whether someone was previously infected and recovered.

The other question is whether India is “missing” Covid-19 deaths.

Most affected countries have inadvertently under-reported deaths. Studying mortality data in 12 countries, The New York Times found that in March at least 40,000 more people died during the coronavirus pandemic than the official death counts. These include deaths from the contagion as well as those from other likely causes.

And a Financial Times analysis of overall fatalities during the pandemic in 14 countries found that the death toll from coronavirus may be almost 60% higher than reported in official counts. None of the two studies feature India.

Prabhat Jha of the University of Toronto, who led India’s ambitious Million Death Study, believes that to “do this right, missing deaths have to be considered”.

“Since most deaths occur at home – and will be for the foreseeable future – in India, other systems are needed,” Dr Jha told me.

Around 80% of deaths in India still happen at home. This includes deaths from infections like malaria and pneumonia. Maternal deaths, and deaths from sudden coronary attacks and accidents are more often reported from hospitals. “A lot of people get some medical attention over time, return and die at home in India,” says Dr Jha.

Clearly, counting hospital deaths alone is not going to be sufficient enough to get an accurate number of Covid-19 fatalities.

Trying to get a count from funerals at crematoria and burial grounds would be equally tricky. Many of India’s dead are cremated in the open in large swathes of the countryside. Funeral services cater only to a small sliver of the population.

At the same time, there are no reports yet of a massive surge in hospital deaths, which would surely have not gone unnoticed, K Srinath Reddy, president of the Public Health Foundation of India, told me. (For example, a sharp rise in deaths of children in specific hospitals in northern India in recent years has been faithfully reported.)

Similarly, Prof Reddy believes a sharp spike in home deaths over a long period is also not likely to go unnoticed.

In the absence of a robust public health surveillance system, experts say mobile phones could be used to find out whether there was an unusual surge in influenza-related deaths which could be linked to Covid-19.

More than 850 million Indians use mobile phones and they could be persuaded to report any unusual death in their villages on a toll-free number. Authorities could then follow up the deaths by visiting the families and conducting “verbal autopsies”.

Counting deaths has always been an inexact science in India.

Some 10 million people die in India every year. The Million Death Study found that some deaths were overestimated (India had only 100,000 premature HIV deaths in 2005, about a quarter of the total estimated by WHO) and some were underestimated (five times as many malaria deaths as the WHO had estimated.) Also, according to the government’s own admission, only 22% of deaths in India are medically certified.

Then there’s the question of how to define a Covid-19 death.

Some Indian doctors have reported that many people were dying of Covid-19 symptoms without getting tested or “treated”. Then there’s the question of wrong diagnosis in a country where doctors often misdiagnose the cause of death.

Jean-Louis Vincent, a professor of Intensive Care Medicine at Belgium’s Erasme University Hospital, told me there was under-reporting of Covid-19 deaths “in many countries, including India”.

“When you are told the person had some fever and some respiratory problems before death, you may suspect Covid-19. But it may be something else,” he said.

“Death is often preceded by an infection, sometimes minor. If you do not test, you may attribute many deaths to Covid-19 or deny its role altogether. That is why the mortality rates from 1918 Spanish flu varied so much.”

Dr Vincent is not sure whether the death counts tell the whole story about the infection. “Recording the number of deaths due to Covid-19 is not very meaningful to evaluate the severity of the disease. The number of hospital admissions is somewhat better, but it does not include all deaths outside the hospital,” he says.

It is also true, as experts say, that most governments are naturally concerned about reporting deaths to avoid scaring people.

“But nobody is trying to hide deaths intentionally. You can’t hide mass deaths,” says Dr Jha.

“Tracking deaths is far more reliable than cases, which are heavily affected by testing biases. But the key is to make sure all deaths or a good random sample or snapshot of deaths is captured.”

India might be missing some deaths and not diagnosing every patient correctly for Covid-19. But the fatalities are unarguably low. Yet, it’s too early to say that the country has bucked the trend. “Let’s be frank,” one expert told me. “We don’t know yet.”