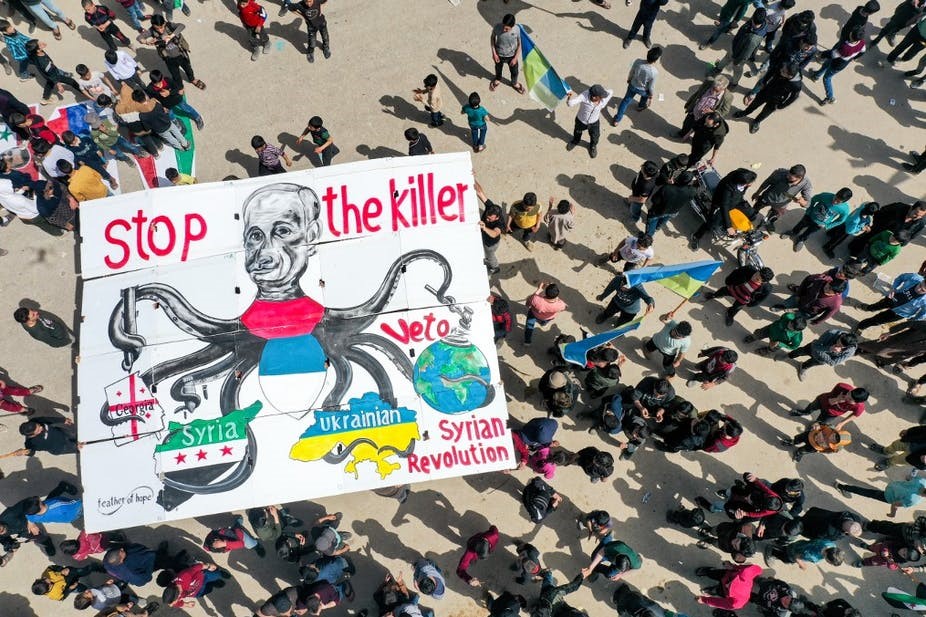 It has been said over and over again: the war crimes, or – to take the view of US president Biden – crimes against humanity or genocide committed by the Russian regime in Ukraine, resemble those perpetrated in Syria since 2015 and in Chechnya in 1999-2000. Be it in Mariupol, Bucha, Kramatorsk, or Borodianka, each day brings its share of macabre revelations.

Western leaders have been quick to express their shock. However, this emotional display should itself unsettle us when the international community has spent years looking away from the Russian regime’s crimes. The Russian army’s history in Syria and Chechnya, as well as Putin’s declarations on his intentions in Ukraine, meant the Ukrainians’ fate was predictable. And new crimes will be committed soon should we fail to do all that is in our power to stop them: the major offensives in the Donbass is nothing but a confirmation of Putin’s will of destruction. Russia’s war of extermination in Syria goes on in Ukraine.

As in Syria, hospitals are being deliberately targeted, civilians murdered and no one knows whether the Russian regime might resort to deploying chemical weapons the next day, in the same way it had authorised the Syrian president, Bashar Al-Assad, to do so. In Syria, Russian forces alone have killed more Syrian civilians than Isis – including countless children.

Like in Syria, the Kremlin is pushing propaganda about Ukraine that is not even meant to be credible anymore. The purpose is to sow doubt. In the case of the bombing of the Mariupol paediatric hospital, it has not hesitated to put forward three contradictory takes: firstly, accusing the Ukrainians, secondly, claiming the images were fake, and finally, recognising that Russian forces had destroyed it, but did so because the hospital served as a shelter for a nationalist battalion.

The regime’s propagandists abroad worked to amplify Putin’s claim that in Ukraine, Russia would primarily be dealing with “neo-Nazis”, endlessly hammering in the example of the Azov battalion. They had done the same thing for Syria when they mirrored the Kremlin’s assertions that jihadists hid in schools and hospitals. By using terms such as “Nazis” or “terrorists”, they are in fact designating civilians, as though they were people who do not have the right to life.

The comparison doesn’t stop there. The Ukrainian conflict most tragically recalls the Syrian one in the West’s failure to take action that could radically change the situation. In other words, save Ukraine and ensure that Russia loses – completely.

Granted, the West is supplying Ukraine with defensive and now even offensive arms and heavy sanctions have been adopted against the Russian regime. A broader awareness of its reality has emerged: after some hesitation, war crimes have now finally been named as such. Europeans have also welcomed Ukrainian refugees.

But this progress makes our shortcomings even more damning. No one can be sure today the fate of Ukraine in a few months or years will not warrant new points of comparison with Syria: just as Assad continues to rule over Syria and launch murderous attacks on the Idlib region, parts of Ukraine could well remain at war and occupied.

Military aid, sparingly granted at the beginning, has recently made significant progress. US Secretary of State Antony Blinken and Secretary of Defense Lloyd Austin’s visit to Kyiv on 24 April has paved the way for a dramatic increase in Washington’s military aid to Ukraine. Recognising Russia’s invasion as a “turning point” that threatened the entire post-World War II order, even Germany broke its longstanding practice of not transferring lethal weapons it controlled to a conflict zone.

While this certainly allows Kyiv to better retaliate against Putin’s army, the pace is still not sustained enough. Indeed, the weapons provided to Ukraine may not be sufficient for them to expel Russian troops in the weeks and months to come. They are both not numerous enough and sometimes not the most efficient ones. For example, the anti-aircraft Gepard tanks supplied by Germany were developed in the 1960s and are another sign of the poor state of the Bundeswehr.

While sanctions are increasing, they’re still insufficient, and it is difficult to comprehend why the West failed to unleash them in their full force from the onset. This would mean: an absolute embargo on Russian gas and oil, in conformity with MEPs’ wish; the disconnection of all Russian banks, notably Sberbank and Alpha Bank, from the Swift interbank payment system, along with an asset freeze and travel ban on a greater number of Russian personalities close to power – the figure of 6,000 has been often mentioned. These measures should have been taken long before the war, and the Nord Stream 2 gas pipeline should have been abandoned.

While the war crimes have indeed been named, some still shy away from designating their main perpetrator as a war criminal. We know the fallacious reason: such a public assignment would represent a “provocation” that would make him less inclined to compromise. As if, given the immensity of his crimes, this should change anything about his future behaviour.

As for the remarkable solidarity observed in Europe toward Ukrainian refugees, no one knows if it will be sustained in the long run. Such gestures may also provide an excuse for leaders to evade the more pressing task of taking a military stance in the war. For Syrians, the story is here again all too familiar: a good number of politicians had opted to concentrate their resources on tackling the “humanitarian crisis” as a convenient way to make up for their inertia in the face of Assad.

We cannot allow this scenario to reproduce itself in Ukraine: if we are to push the aggressor outside of the country, the only solution is to considerably increase military aid to Kyiv. Focusing on humanitarian aspects, however necessary, will not solve the humanitarian issue or the Russian war on Ukraine – as evinced in Syria by the ongoing misery of refugee camps, forced exile of 6 million Syrians and massacres.

The persistent hold of the Kremlin rhetoric

The same rhetorical devices that are so sweet to the Kremlin’s ear and were already heard in the case of Syria can also be found in the Ukrainian conflict.

First up is the talk of so-called “red lines”. After Barack Obama’s disastrous U-turn in the 2013 chemical attack in Ghouta, no White House occupant in their right mind ought to resort to it again. However, Joe Biden’s warnings Russia’s use of chemical and biological weapons would trigger a “proportional” US response appear to match his predecessor’s words.

Such talk is legally and strategically untenable.

On the legal front, chemical and biological weapons are certainly prohibited by international conventions, but so are cluster munitions, which are particularly destructive to civilian populations, and which, according to several investigations, appear to have been used by Russia in Ukraine.

Strategically, prioritising a response to the use of chemical or biological weapons implicitly amounts to minimising crimes committed in a “conventional” fashion against populations. It is also a way of shirking one’s responsibilities in the event war crimes are perpetrated through other methods; if there is to be a red line, it should lie within war crimes and crimes against humanity. This is what happened in Syria where war as well as the related collapse of health infrastructure may have caused more than a million deaths.

Moreover, we continue to be told that “the solution to the crisis can only be political” – albeit in a less explicit fashion than before. Besides the fact that this is not a crisis, but a war, we know where this language led to in Syria. There was no political solution because there simply could not be one so long as Assad remained in power. The leaders locked themselves into unworkable UN resolutions and the fiction of a constitutional committee that predictably achieved nothing. This has only strengthened Assad and his Russian and Iranian allies. To think that it could be in the case of Russia’s war against Ukraine is a similar denial of responsibility.

Finally, the illusion of a way out through negotiations continues to be promoted in some circles. Some will say that President Zelensky is open to negotiations; this is the case, but with two conditions sine qua non:

These demands run counter to Putin’s plans, who wants Kyiv to recognise his hold on Donbass and Crimea – and probably on the whole area linking these two territories. His project is the destruction of Ukraine as a free nation.

Have we learned the Syrian lesson?

If some Western governments were to try to push Kyiv into accepting concessions on these points, they would be calling into question the sovereignty of Ukraine as well as the foundations of international law. The Syrian example had already taught us negotiations only help to strengthen the Russian regime’s stances and army.

We must now apply the Syrian lesson to Ukraine. Any retreat, accommodation, appeasement with Putin’s regime will result in greater crimes on the ground. If the West delays in decisively helping Ukraine to regain its territory by providing it with all the necessary armaments to do so, the result will be an even greater number of deaths.

Republish from The Conversation under Creative Commons licence.

Red flags to watch out for in Kenya’s electoral violence