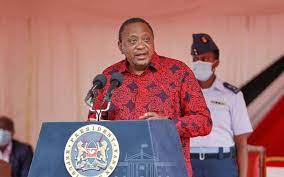 Wednesday, February 10
Without mentioning names, the head of state vowed not to hand over power to a thief who will oppress Kenyans. Speaking on Wednesday, February 10, in Nairobi while drumming support for the Building Bridges Initiative (BBI), the president insisted that he will ensure the person who will take over from him is someone Kenyans can trust and who can unite them.
“My aim is to ensure that those who will assume office after me will not be thieves who will oppress Kenyans. I will only leave the office to someone Kenyans can trust and who will unite them,” said Uhuru.
Although it was not clear who the head of state was referring to, he might have directed the statement to politicians he has been at loggerheads with. The Jubilee Party leader in his speech reiterated his earlier remarks that he will not cling to power and is ready to hand over to someone else. He insisted that his focus during his remaining time will be to deliver his pledges to Kenyans who elected him into office.
“I don’t care those who move around insulting me, my focus right now is on Kenyans who elected me into office, I will make sure I fulfill my promise to them,” he added.
Via TUKO
previous post