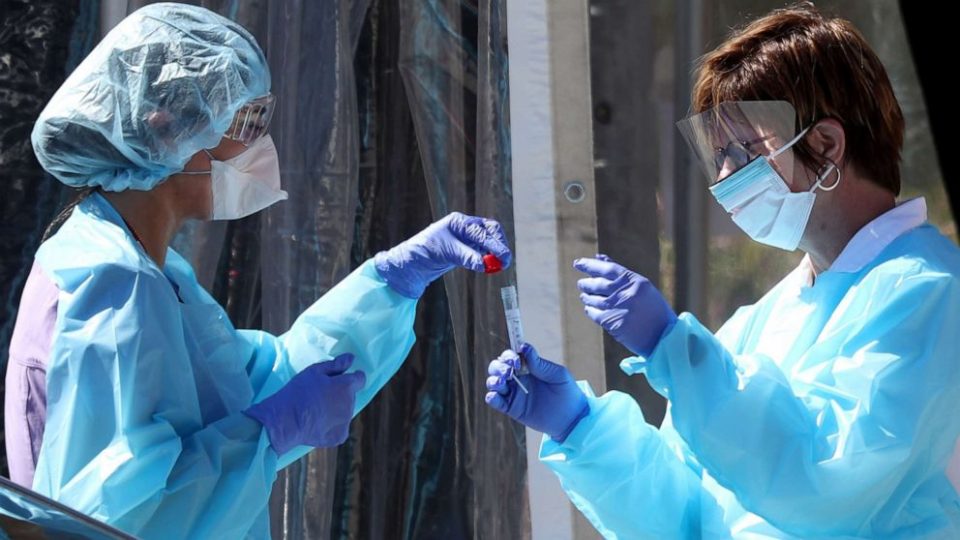 The spread of the global coronavirus pandemic has exposed the shockingly “perverse” circumstances under which overseas doctors, nurses and care workers are having to work in the UK.  Tens of thousands employed by the National Health Service (NHS) not only find themselves in a situation where they are having to pay as much as $15,000 over five years in fees levied by the Conservative Government to work in Britain, many are having do so knowing that their children and spouses would be evicted from Britain if they died while treating COVID-19 patients.

Egyptian Doctor Aladdin is one of 153,000 non-British workers in the NHS recruited to the “frontline” combating a pandemic that has taken 18,000 British lives, many of whom are his colleagues in the NHS. “I scarified my life for this country and for the people here. I can’t do anything more to prove that I love this country,” Aladdin told BBC Radio London earlier this week speaking about the desperate situation he finds himself in the UK.

Describing his situation, Aladdin said that his three children and wife would be forced to return to Egypt and fend for themselves if he died after becoming infected with COVID-19 while treating patients.

The fear is equally crippling amongst family members who have to watch their loved ones putting themselves at a greater risk of death than they need to because of a Conservative Government that has failed to provide sufficient personal protective equipment (PPE). “Losing my husband would be devastating,” said Shivashni Veersamy in a letter to the Guardian, appealing for her consultant oncologist husband to be granted British citizenship.

A man wears a medical mask as a precaution against new type of coronavirus (COVID-19) in London, UK on 24 March 2020 [İlyas Tayfun Salcı/Anadolu Agency]

Veersamy said that she had become “fearful every day he goes to work.” She and her two daughters are resident in the UK on dependency visas tethered to her husband’s tier 2 work visa. If he were to lose his life to the pandemic, she would be forced to return to South Africa with her daughters. “We have nothing left there, and to start again, with the inherent dangers, would be unimaginable,” she said.

The pain and anguish of Aladdin and Veersamy is made more terrible by a government policy which many have called to be abolished. Foreign workers are paying tens of thousands of dollars for the “privilege” of risking their lives to save COVID-19 patients. Those unable to pay levies – which is set to increase by 56 per cent this October – have no option but to leave.

Known as the Immigration Health Surcharge, the levy was introduced by the coalition government in 2015 to make sure that the “immigration system is fairer to British citizens and legitimate migrants”. The fee went up from some $250 a year to $493. A third hike is expected in October when the fee will be $770. It is payable for every member of the household.

For many foreign doctors and nurses with a family, this could mean tens of thousands of pounds. Under the current levy a family of four on a five-year work permit or limited leave to remain visa has to pay $9,860. Such fees would be crippling for junior doctors whose starting salary is only about $28,000 a year. Once the second increase kicks in later this year on the first of October, the same family of four would be required to pay $15,400.

The Tories had promised to increase the surcharge to this level during the 2019 general election campaign. This is thought to be deeply unfair since migrants already pay for the NHS through their taxes. The surcharge is said to represent an additional tax on UK visas, which can also run into thousands. Overseas doctors like 37-year-old Dr Siti Ibrahim not only have to pay $5,185 to be granted a visa along with her husband and their four children, she will be required to pay thousands more in surcharges. “My heart is here in the NHS,” said Ibrahim in criticism of the levy “but I can only take so much.”

With the spread of the coronavirus pandemic and the vital role played by doctors, nurses and care workers, there have been growing calls to scrap the fee. “Treating hard-working healthcare staff as a burden on the very services they provide is perverse,” said Richard Murray, the chief executive of the King’s Fund. He fears that the existing policy exacerbate the staff shortages that are causing widespread problems for the overstretched NHS. The fees not only forces many out it makes the UK very unattractive for aspiring doctors and nurses.

Others echoed Murray, insisting that it is unfair and wrong to charge overseas-born health professionals for using a service which they help to fund twice, by paying income tax and national insurance.

“While the new government says it wants to make it easier for international staff to come to work in the health service, they are doing the exact opposite by charging them to use the very service they are contributing their skills to,” said Chaand Nagpaul, who chairs the British Medical Association, which represents doctors.

Dame Donna Kinnair, chief executive of the Royal College of Nursing, said: “It cannot be acceptable that nurses that come from overseas to work in the NHS face these charges whether they access NHS services or not. This charge goes against efforts to hire professionals. A new nurse from overseas with two children would have to work for 116 hours just to pay off the charge – hardly an incentive for coming to work in our NHS.”

A petition has gone up urging the government to grant non-British citizens who work in the NHS automatic citizenship. “Give NHS workers who are EU and other Nationals automatic UK citizenship if they stay and risk their own lives looking after the British people during the COVID crisis,” the petition said. 52,616 have signed

The article is orinally published in Middle East Monitor