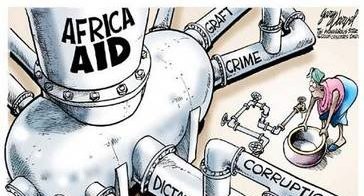 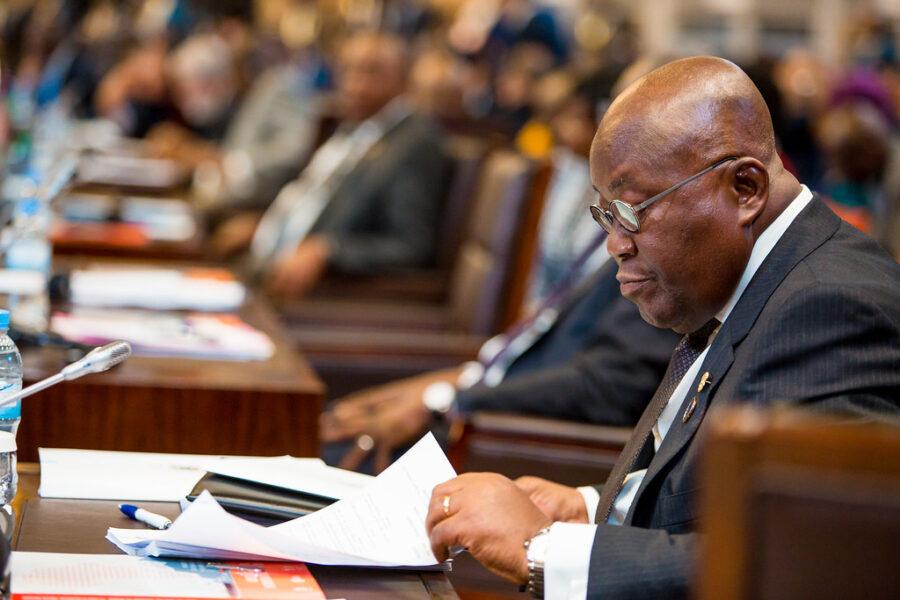 Despite billions in aid over decades, the rise in living standards in Africa has been meagre. Some presidents, like Nana Akufo-Addo of Ghana (pictured), are calling for countries to move “beyond aid”. Credit: Paul Kagame.

Since 1960, Africa has received billions of dollars in aid. In the last 30 years alone, one estimate puts aid to the continent at $1.2 trillion, though distributed very unevenly across the continent. In this time, African economies have developed. Life expectancy and populations have both risen dramatically, and absolute poverty has fallen. Yet the rise in living standards has been relatively meagre, and few African countries have achieved the rapid economic growth seen in much of Asia – in South Korea, China, Vietnam, Indonesia, India or Bangladesh – in the same period.

Why has so much aid failed to deliver the economic transformation seen elsewhere? Is it too much, or never enough? Has it helped or hindered? Can it be useful and productive, or should it be stopped?

These are the core questions addressed in Greg Mills’ latest book, Expensive Poverty: Why aid fails and how it can work (Pan Macmillan, Johannesburg, 2021).

Mills is director of the Brenthurst Foundation, a South African think-tank funded partly by the Oppenheimer family. His approach to these questions is driven less by ideology than by decades of hands-on experience in countries as diverse as Zambia, Somalia, Ghana, Pakistan, and Afghanistan, where the organisation is working with business and civil society as well as governments. His book draws deeply on this experience as well as on a wide literature and an even wider range of practical examples.

Mills identifies three core reasons aid has failed to deliver the transformation expected: state weakness, partly a result of the historical colonial legacy; corruption, due to the absence of genuinely competitive and accountable political systems; and wrong-headed donors that think they know best or are only interested in short-term impact.

He addresses, in particular, the constant appeals for a “Marshall Plan for Africa”, and the seductive appeal of the Chinese model of “authoritarian development”.

The original Marshall Plan, a 1948 American plan to provide foreign aid to Western Europe after WW2, worked for several reasons: it provide a critical mass of funding (3% of GDP, far less than many African countries have received); it was time limited (four years, against the 40 years many African countries have been receiving aid); it was explicitly conditional on the reconstruction of open markets (a condition anathema to some recipients today); and it was firmly based on plans drawn up by the recipients, not the US.

The last point is crucial: the plan worked because it was designed at home by countries who wanted to revive economies where the legal and government structures, skills, and the private sector already existed. The recipient governments’ plans were therefore predicated primarily on restoring private sector-led growth in a way that would avoid the instabilities that caused the Depression.

Sadly, the term “Marshall Plan” has become synonymous with just a very large sum of money, whether to tackle development, climate change, or a health emergency. But what matters are the situation in which the money is used and how it is spent. Post-colonial Africa’s situation is significantly different from that of post-war Europe, and Western aid to Africa comes with different assumptions to American aid to Europe.

Fundamentally, Mills argues, the failure of aid to create faster development is a political failure, not an economic one. He draws attention to “the empirical congruence between democracy and development in Africa”, citing Ghana, Senegal, Kenya as examples of democracy delivering accelerated growth. The more democratic a government, the more answerable it is to its citizens, and the greater the accountability for decisions and spending. Though corruption undoubtedly exists in these countries, it can be more easily exposed and contained. Where leaders or the political elite feel that they can act with impunity, that is where the scale of corruption escapes all bounds, and the difficulties of spending aid productively are compounded. In that aid can, even if indirectly, subsidise authoritarian governments, Mills advises donors to focus support on more democratic governments.

Violent conflict exacerbates the problems, and Mills’ experience of working in countries such as Afghanistan illustrates the problem that donors’ short-term focus can make political problems worse by getting money out of the door so fast it fuels corruption and distorts incentives along the way. His analysis of the donors’ failure in Afghanistan (in chapter 6 but expanded in his book The Ledger) shows the devastating effects of these interventions.

This experience also underpins his critique of the state-directed development model. This can indeed deliver rapid economic growth and poverty reduction, as it has in Ethiopia and Rwanda, though the extent of real poverty-reduction in the latter is contested and progress in the former has been shown to be politically fragile. As the fighting in Ethiopia has demonstrated, nothing increases poverty faster than conflict. There is also a high risk that when government controls so much of the economic activity, the political elite will be tempted to use it simply for rent extraction.

Not that this risk is limited to authoritarian states. Despite it being an electoral democracy (however imperfect), Mills notes that “things don’t work in Nigeria for a reason” – namely, that the big men are doing very nicely thank you from the dysfunctional system, extracting rents and using them to grow their own businesses and provide political patronage.

There are two important points here that need more exploration than Mills provides.

In all countries everywhere, politics and business are closely entwined, and electoral democracies can be as susceptible to corruption and distorted decision-making as autocracies. A Ghanaian politician once complained to me: “This democracy of yours that we’ve adopted: the problem is it’s so expensive”. Political parties need money to run campaigns, to deliver t-shirts, reward foot soldiers; and where people have so little to give, that money must come from businesses, who expect some return, be it contracts or licences or protection from imports and competitors. And after the election, politicians need to deliver on their promises of better roads, new clinics, free schools, which can distort government economic decision-making. These risks are as live in the UK or US as they are in South Africa or Sierra Leone, though in an open and accountable system, this can be relatively transparent, allowing voters to judge for themselves, at least in theory.

The second point is that where state-directed development has worked, it has done so by liberating competition in the business sector, not constraining it. China (though not cited by Mills), as well as South Korea, is a great example of this. Deng Xiao Ping began by liberalising the market for agricultural products and, more recently, Alibaba was created by Jack Ma not by the Communist Party. China is now facing the challenge that free markets and unfree politics don’t mix so well. But the key point in Africa is that genuine job-creating and livelihood-improving development has to be led by business, not government, let alone donors. Governments can facilitate this or obstruct it. The extraordinary thing about Nigeria is that so much business has flourished despite rather than because of the government (leaving aside those few who have profited mightily from government-protected markets).

The ultimate conclusion Mills reaches is that donors should be more discriminating and primarily support governments that are democratic and facilitate private sector growth. This, however, poses a “donors’ dilemma”: to impose such conditionality infringes the autonomy that recipient-led development demands; and being selective in which countries to support condemns millions of others to a further generation in poverty. Many donors believe it is possible to provide aid directly to people, bypassing undemocratic governments, but this is still fraught with unintended consequences and can simply provide a safety net for authoritarians. There is also the irony that democratic countries with vibrant private sectors are those least likely to need substantial aid: like Ghana, they want to move “Beyond Aid” and finance their own development from capital markets.

Ultimately, perhaps, it is time to move away from the debate about aid to focus on how African countries themselves can achieve the economic transformation that their people certainly – and their governments in rhetoric at least – are seeking. For this to happen, people need systems of government that work for them. But that is another book.