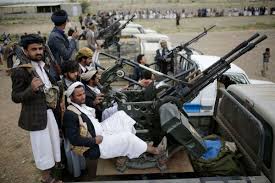 Yemen’s Houthi militia are in possession of new weapons similar to those produced in Iran, according to a UN report obtained by AFP on Friday, in potential violation of a UN arms embargo.

Some of the new weapons, which the militia have possessed since 2019, “have technical characteristics similar to arms manufactured in the Islamic Republic of Iran,” said the report, which was compiled by a panel of UN experts tasked with monitoring the embargo.

The panel didn’t say whether the weapons were delivered to the Houthis directly by the Iranian government, which has repeatedly denied sending them arms.

“In addition to the previously known weapon systems, they used a new type of Delta-design uncrewed aerial vehicle and a new model of land attack cruise missile,” the document said.

The weapons, as well as commercially available parts constituting some of the weapons, potentially violated the embargo, according to the document.

The experts separately added that the Houthis’ claim that they carried out the attacks against two key Saudi oil installations on September 14 was “unlikely.”

Several countries, including the United States, have ruled out the Houthis’ ability to conduct such an attack, and instead accused Iran, which has denied involvement.

The panel additionally said that it had identified a “Houthi network involved in the repression of women who oppose the Houthis, including through the use of sexual violence.”