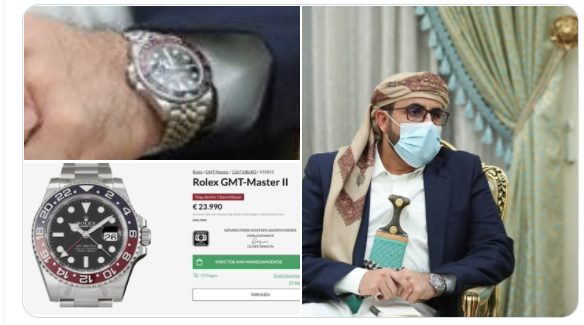 The Spokesman for the “Ansar Allah” militants and the leader of the group’s delegation in the Yemen peace talks was heavily criticized during his visit to Tehran for wearing a hundreds of thousands worth yacht-master Rolex watch.

This is not the first time Mohammad Abdul Salam ignites debate over wearing an expensive watch; An old photo was also trending for the Houthi leader with a “YACHT-MASTER 40 Oyster, 40 mm, Everose gold” watch worth about $22,000 (over 18,00 Euros).

Human rights activists have criticized the Houthi leader for wearing super expensive watches worth around $172,000 (43,000,000 Yemeni Rial) amid the country’s famine and deteriorating economic conditions.

The World Bank has earlier warned of a terrible starvation crisis in Yemen. According to the data shared by the Bank, Yemen has been considered for years the poorest country in the MENA region and is now also suffering the worst humanitarian crisis in the world.

Yemen’s stability and living conditions have been deteriorating since the start of the civil war in 2014 between the UN recognized-government and Houthi militants. The situation became much worse in 2020 due to the novel pandemic which was discovered in 2019 in China’s Wuhan and affected the global economy and health sectors.

At Least 24.1 million people – 80% of Yemen’s population, are in need of humanitarian aid and protection, the United Nations reported.

Furthermore, the UN added more than 14 million Yemenis are in acute need and over 3 million people have been displaced from their homes since 2015.

Rolex SA is a luxury watch manufacturer based in Geneva, Switzerland. It was founded in London, England in 1905. It registered Rolex as the brand name of its watches in 1908, and became Rolex Watch Co. Ltd. in 1915. However, post WWI, it moved its base of operations to Geneva due to the unfavorable economic situation after the war.

PM Roble in Mombasa to hold talks with Kenya’s Uhuru

South Portland city of Maine got a Somali mayor