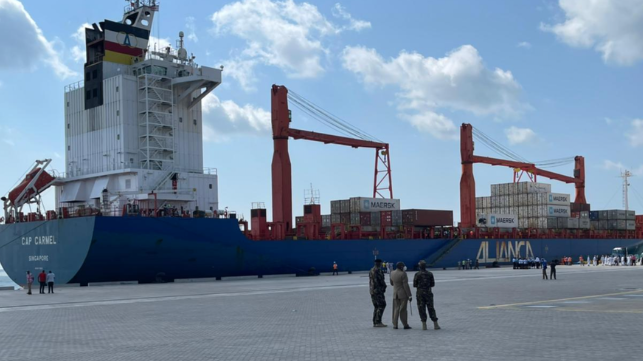 Kenya’s newest mega infrastructure project, the Lamu port, has received its first ship. Moina Spooner, from The Conversation Africa, asked Jan Bachmann and Benard Musembi – who study the environmental, socio-economic and security dynamics along the Lamu Port South Sudan Ethiopia Transport Corridor – to provide insights into the history of the port, the opportunities it presents and the concerns around it.

When and why was the Lamu port project initiated?

The Lamu port is part of an ambitious transport corridor between Lamu – a small archipelago north of Mombasa in Kenya – South Sudan and Ethiopia.

Kenya already has one deep-water port in Mombasa. Plans for a second one to diffuse economic dependency on Mombasa go back to the mid-1970s. However, it only materialised in March 2012. The occasion was marked when the then East African heads of states – Kenya’s Mwai Kibaki, Ethiopia’s Meles Zenawi and South Sudan’s Salva Kiir – laid the port’s foundation stone.

In its early ambition, the Lamu port figured as connecting the landlocked East African economies to global trade routes. More specifically, it was envisioned as an alternative outlet for South Sudan’s oil, which is currently pumped via the Greater Nile Oil Pipeline to Port Sudan.

With South Sudan mired in continuous war and Ethiopia upping its stakes in the ports of Djibouti and, most recently, Berbera, the international ambitions of the transport corridor shrivelled somewhat.

Yet, as a cornerstone of the Kenyan government’s Vision 2030 development plan, it is now branded as a “game changer” project.

Its new aim is to integrate marginalised northern Kenya into the Kenyan economy and the nation. Plans for the corridor include a pipeline, a railway line, a road network connecting Lamu, Garissa, Isiolo, Moyale and Turkana, a dam along Tana river, airports and resort cities. There are also plans to establish numerous industrial areas along the corridor.

We show in our research that most of the plans are real on paper and government websites only. Nevertheless, the implications for communities across northern Kenya are very concrete. Beside the completion of the 500km Isiolo-Moyale road, the official opening of Lamu port marks the project’s most salient achievement so far.

Built by the China Communication Construction Company, the first three of the planned 32 berths come at a cost of $367 million.

What opportunities does the port present?

Mobilising projections about future trade, the Kenyan government has persistently argued that the Lamu port will become a viable and necessary complement to the hub of Mombasa. Local authorities specifically invest their hopes in plans for a special economic zone, though to date these have rather been illusive. This promises significant investments in the port and the creation of hundreds of jobs.

Since the port will primarily serve as a transshipment hub, it’s expected to attract key shipping lines by competing with the ports of Djibouti on the horn of Africa and Durban in South Africa. In addition it would serve key markets in southern Ethiopia and South Sudan.

So far, around 19 shipping lines have inspected the port. The Kenya Ports Authority anticipates many will use it and take the generous promotional offers currently in place.

On the positive side, road works connecting Lamu to Nairobi via Garissa are well under way. And the new road between Lamu and Garsen has already reduced transport costs as trucks and travellers no longer need to go via Mombasa. Once the project’s highway towards Garissa and Isiolo is completed, the former northern “frontier” region may benefit from the connection to the port.

But there are big question marks when it comes to the overall economic value of a second Kenyan deep-water port. This concern is driven by the deficient infrastructural integration of Lamu and Northern Kenya.

Logistics experts also warn that Lamu port has formidable potential to become a white elephant project because of the immense uncertainties about its core use.

What have been the big issues around construction?

Planning and construction of the port have yielded a wide range of concerns and contestations, particularly on land rights, the environment, local livelihoods and security.

Different rights groups have documented numerous complaints by residents about compulsory land acquisition. One study found that the government had taken more land than it paid compensation for.

Another major concern touches on the environmental impact of the port’s construction, some of which came to light in a 2018 High Court ruling. And local protests against the project have been met with harassment by Kenyan security forces.

The economic livelihoods of hundreds of local fishermen will be disrupted by the port because its extensive restricted area restrains access to viable fishing grounds. And in contravention of a court ruling that awarded fishers about KSH1.7 billion ($18.4 million) compensation for their economic losses, the government has delayed the payments over disagreements about the list of beneficiaries and the mode of compensation.

Concerns about employment opportunities to residents are also growing. So far, around 100 youths from Lamu have secured employment at the Lamu port.

Lastly, there are security concerns. In the last 15 years or so, Lamu has become a highly volatile region. Attacks by the al-Shabaab militant group have brought violence to the area and turned it into a highly securitized region. Security operations have significantly reduced incidents, but periodic al-Shabaab attacks have affected construction activities.

How should these concerns be handled?

The concerns from the community are weighty and require serious attention since they affect many aspects of their daily lives.

Our ongoing research shows that many of the concerns could have been averted if due process had been followed from the project’s inception. This includes timely and adequate compensation to everyone affected by the project. It also includes proper and robust environmental and social impact assessments as well as considering qualified residents for employment opportunities. Finally, there’s the issue of addressing the perennial problems of land rights in Lamu.

It’s vital that Lamu residents are treated as direct stakeholders and partners to the project. Their voices, concerns and aspirations should be taken seriously.

Jan Bachmann is a senior lecturer in peace and development research and international relations at University of Gothenburg.

Benard Musembi Kilaka is a doctoral student at the University of Gothenburg specializing in the social, environmental and security dynamics along the Lamu-South Sudan-Ethiopia Transport Corridor (Lapsset).

Why are Arabs so powerless? Unlike Israel, they never valued brain over brawn

Vaccines and the West’s Credibility Crisis