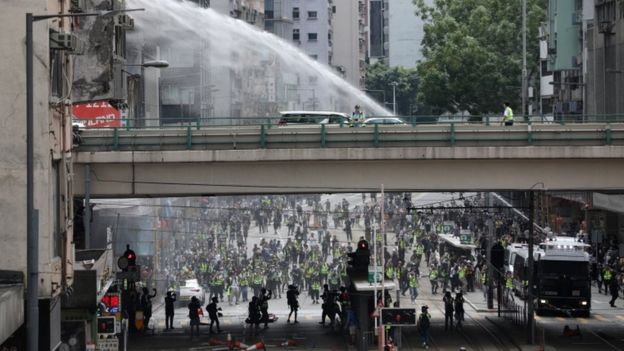 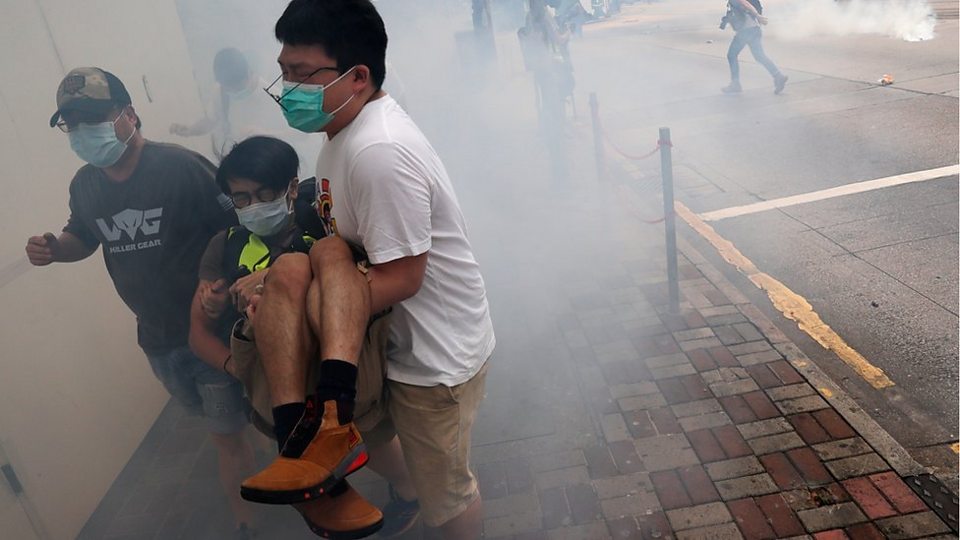 Police in Hong Kong have fired tear gas and water cannon at protesters rallying against China’s plans to impose a new security law on the territory.

Thousands of demonstrators have been marching through the city centre. Police say 120 have been arrested.

Signatories called it a “comprehensive assault on the city’s autonomy, rule of law and fundamental freedoms”.

China is seeking to pass a law that would ban “treason, secession, sedition and subversion” in the territory.

It has dismissed fears the legislation would harm foreign investors in Hong Kong, an important financial centre, and has lashed out at “meddling” countries.

Hong Kong’s leader Carrie Lam, who is seen as part of the pro-Beijing political establishment, has pledged full support for the proposed law and said the city’s freedoms would remain unchanged.

How are the latest demonstrations unfolding?

Protesters gathered in the busy Causeway Bay and Wan Chai districts of the city on Sunday, chanting slogans against the government and waving banners.

Riot police fired tear gas and water cannon at demonstrators, who were wearing face masks to protect against the spread of coronavirus.

The rally comes despite earlier warnings from authorities against unauthorised assembly and a ban on large public gatherings to enforce social distancing.

Some protesters threw objects such as umbrellas and water bottles at officers, and used bins and other debris to set up road blocks.

Reports say Sunday’s protest followed a similar pattern to many of last year’s demonstrations, many of which turned violent.

More than 8,400 people have been arrested in Hong Kong since pro-democracy protests erupted last year.

For many protesters Sunday’s protest was seen a stress test. They wanted to see how the police would react to large scale demonstrations following months of relative quiet.

The young and old chanted familiar slogans from last year’s movement. They called for the Hong Kong government to respond to the five political demands they set out last year.

But there were new slogans, too. Some protesters called openly for Hong Kong independence. They claimed that it was now the only way forward for the semi-autonomous city.

The police were quick to disperse the crowds. They fired several rounds of tear gas before charging towards the protesters.

The national security proposal has united protesters willing to risk both breaking the law and social distancing measures in order to show their anger at plans that many fear could spell the end to one country two systems.

What is in China’s proposed law?

The “draft decision” – as it is known before approval by China’s National People’s Congress – includes an article that says Hong Kong “must improve” national security.

That means China could potentially have its own law enforcement agencies in Hong Kong, alongside the city’s own.

Earlier this week, US Secretary of State Mike Pompeo condemned the plans, which he described as a “death knell” for the city’s freedoms. The UK, Australia and Canada have also expressed their “deep concern”.

Relations between Washington and Beijing are already strained over trade disputes and the coronavirus pandemic.

The US is currently considering whether to extend Hong Kong’s preferential trading and investment privileges. President Trump has also weighed in, saying the US would react strongly if the law went through – without giving details.

Speaking on Sunday, China’s Foreign Minister Wang Li said “some political forces in the US” were pushing the two countries “to the brink of a new Cold War”.

The Chinese government argues the law is necessary to “prevent, stop and punish” protests such as those that rocked Hong Kong last year. They were sparked by a bill that would have allowed extraditions to mainland China.

What is in the foreign politicians’ statement?

It describes Beijing’s plans as a “flagrant breach” of the Sino-British Joint Declaration, under which Hong Kong returned to Chinese rule in 1997.

“If the international community cannot trust Beijing to keep its word when it comes to Hong Kong, people will be reluctant to take its word on other matters,” the signatories wrote.

They include 17 members of the US Congress, and 44 UK MPs.

The NPC is expected to vote on the draft law at the end of its annual session, on 28 May. It will then be forwarded to the NPC’s Standing Committee, China’s top legislature, which is expected to finalise and enact the law by the end of June