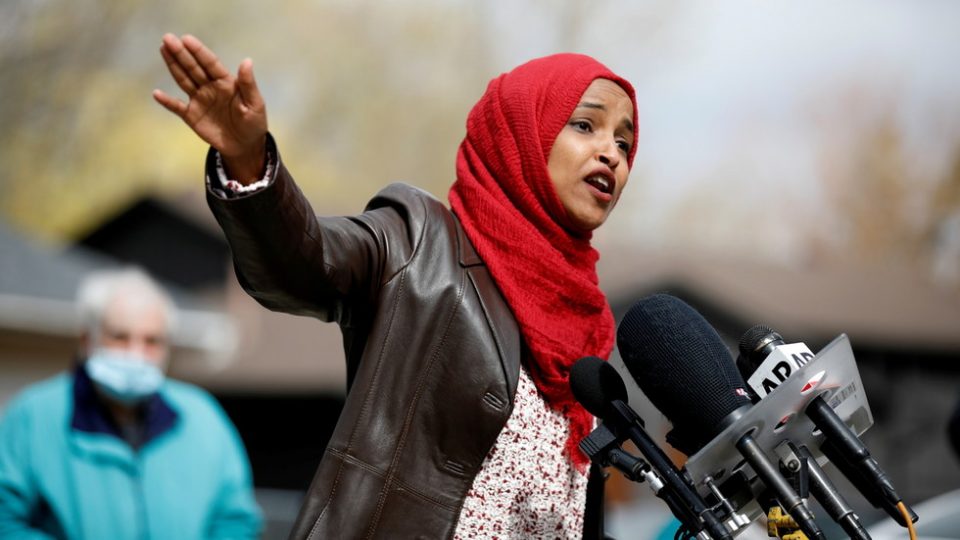 12 Jun, 2021 01:45
FILE PHOTO: Palestinian Hamas militants attend a rally in Khan Younis, in the southern Gaza Strip, May 27, 2021. ©  Reuters / Ibraheem Abu Mustafa
Minnesota Congresswoman Ilhan Omar just can’t win. Hamas is now calling her out after she put the Palestinian militants in the same category as the US, Israel and the Taliban – and fellow Democrats forced her to apologize.

Omar’s statements were “very surprising,” Hamas spokesman Basem Naim said in a statement on Friday, accusing the congresswoman of “equating the victim with the executioner.”

“We appreciate Mrs. Ilhan Omar’s stances in defending justice and the rights of the oppressed around the world, foremost of which are the just rights of our Palestinian people, but we deplore this unfair combination that is contrary to justice and international law,” Naim said on behalf of Hamas.

Naim argued that the US is the aggressor in Afghanistan and Israel is the occupier on Palestinian land, against whom Hamas has the legitimate and “inherent right to resist… by all available means.”

Therefore, Hamas expects Omar and all other defenders of Palestinian rights “to describe things correctly and accurately,” their spokesman added.

Omar touched off the controversy earlier this week, during a House Foreign Affairs Committee hearing, when she asked Secretary of State Antony Blinken about US objections to the International Criminal Court.

“We have seen unthinkable atrocities committed by the US, Hamas, Israel, Afghanistan, and the Taliban,” she said, arguing that there must be “the same level of accountability and justice for all victims of crimes against humanity.”

The comparison drew outrage from both Republicans and Jewish Democrats. By Thursday, House Speaker Nancy Pelosi (D-California) managed to browbeat Omar into issuing a clarification, if not an apology.

“To be clear: the conversation was about accountability for specific incidents regarding those ICC cases, not a moral comparison between Hamas and the Taliban and the US and Israel,” Omar said in a statement. “I was in no way equating terrorist organizations with democratic countries with well-established judicial systems.”

A similar not-quite-apology followed Omar’s comments about Israeli lobbyists in February 2019 – not long after she was sworn in as the first Somali-American, the first naturalized congresswoman of African origin, and one of the first two Muslim women to be elected to Congress, alongside fellow Democrat Rashida Tlaib of Michigan.

On Thursday, Tlaib backed Omar against the “relentless, exclusive tone policing” by the House Democrat leadership and complained that “freedom of speech doesn’t exist for Muslim women in Congress.”

Neither Tlaib nor Omar – who hasn’t tweeted since June 9 – have commented on the Hamas statement yet.

You are not God, Dr Fauci. If science was never challenged, we would never make any progress