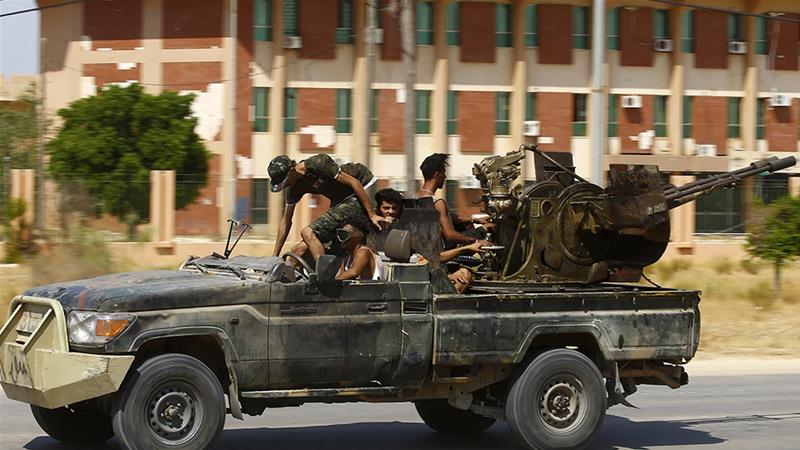 Libyan state oil firm considering closure of Zawiya port and evacuating staff from refinery due to clashes nearby.

Forces affiliated with the UN-recognised Libyan Government of National Accord (GNA) have launched a new attack on the Libyan National Army (LNA) south of Tripoli.

The Libya Observer reported that the forces carried out the offensive on renegade military commander Khalifa Haftar‘s forces in the vicinity of Tripoli airport on Saturday.

The media office of Volcano of Rage Operation said the forces seized several buildings and destroyed tanks and a military vehicle.

“We made progress today … the enemy [LNA] has been defeated, they have fled,” a fighter for the GNA Ashraf al-Mahjoubi said before adding that soldiers from the United Arab Emirates (UAE) and Russia were fighting alongside the LNA.

Since the overthrow of late leader Muammar Gaddafi in 2011, two seats of power have emerged in Libya: One in eastern Libya supported mainly by Egypt and the UAE, and the GNA in Tripoli, which enjoys international recognition.

On Friday, the GNA forces announced that they had made progress in the Tripoli airport area and captured 10 LNA soldiers south of the capital.

Meanwhile, Libyan state oil firm NOC is considering the closure of its western Zawiya port and evacuating staff from the refinery located there due to clashes nearby, a statement said on Saturday.

NOC might also shut down the El Sharara oilfield, whose crude is exported via Zawiya port, the statement said, adding that in the last 48 hours, three bombs hit close to its oil storage tanks.

Zawiya is Libya’s biggest functioning refinery, serving Tripoli as well as regions in the west and south of the country.

Mustafa Sanallah, the chairman of the Libyan Oil Corporation’s board of directors, said that stopping the operations in the port of Zawiya would lead to a reduction in Libyan oil production by no less than 300,000 barrels per day.

In recent days, Zawiya has been the site of clashes between armed groups, during which a missile almost hit the oil complex. Forces allied to Libya’s internationally-recognised government on Friday accused eastern forces loyal to Haftar of having tried to attack the oil port complex.

Haftar’s forces have been trying to take the capital Tripoli, which lies 40 kilometres (25 miles) east of Zawiya, in a campaign since April.

Turkish President Recep Tayyip Erdogan said on Thursday he would send troops to Libya at the request of Tripoli as soon as next month, putting the North African country’s conflict at the centre of wider regional frictions.

Erdogan said a motion for military support to Libya will be submitted to Parliament by January 8 or 9 because Turkey was “invited” by Libya.