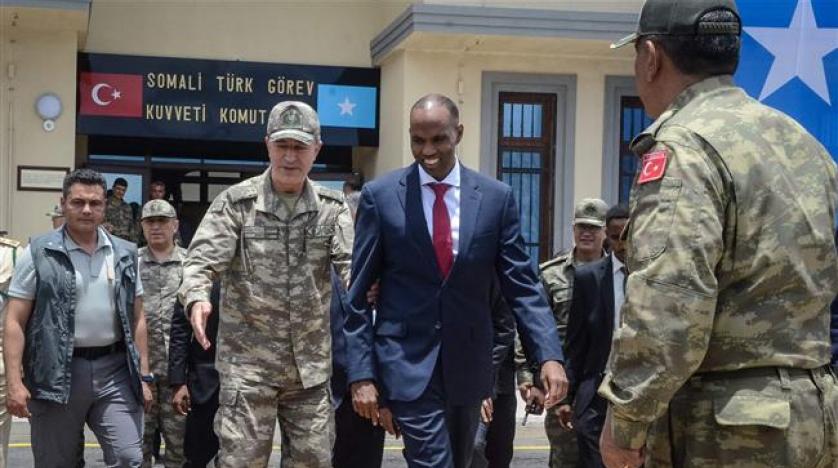 Turkish army’s Chief of General Staff Hulusi Akar, center left, escorts Somali Prime Minister Hassan Ali Khayre during an inauguration ceremony of the Turkish military base in Mogadishu on September 30, 2017. (AFP photo)
14/7/2020
Some speculate that Ankara’s military intervention in Libya may be part of a plan to bolster support for opponents of the Sudanese political transition.

Gulf countries’ scramble to exert economic and political influence over the strategically important Horn of Africa is threatening to sow the seeds of instability in the volatile region.

Saudi Arabia and the United Arab Emirates (UAE) have been vying with Qatar, and its ally Turkey, to cement alliances with countries in the predominantly Muslim peninsula, hugging the western coast of the Red Sea corridor, a major international shipping lane that connects the Suez Canal with the Indian Ocean, through which an estimated $700 billion of seaborne commerce passes annually.

Over the years, Gulf powers together with Turkey have supported peace processes with mixed results, supplied humanitarian aid in times of crises, developed ports, set up military bases and offered direct financial assistance and investment, but their growing rivalries are creating tensions in countries beset by deep internal divisions.

While members of both alliances have long engaged with the Horn of Africa, it was the 2017 Gulf crisis – which saw the Saudis and Emiratis break with Qatar, accusing it of supporting Islamic militants and ties with Iran – that intensified the competition for influence. In effect, they have been exporting their feud to a potentially combustible region, just as some states begin to emerge from years of authoritarian rule and security crises.

A desire to exploit the peninsula’s economic potential, in particular its agriculture, had been a key factor in Gulf engagement prior to the 2017 crisis. That remains an important driver, but the rivalry has set off a race to control ports and establish a military presence along the strategic waterway. For Riyadh and Abu Dhabi, this has become increasingly important because of Iran’s menacing activities in the Gulf region and the war in Yemen, where they have been fighting Iranian-backed Houthi militants.

For Horn of Africa countries, the regional competition is dangerous because the two Middle East blocs have clear political agendas, which might stifle democratic development and stir conflict on the peninsula. The Saudi coalition promotes strong centralised rule, essentially to guard against the political Islam supported by the Qatari-Turkish alliance. Moreover, in return for economic assistance local governments are expected to provide access to resources and take their sponsor’s side in the Gulf rivalry.

Former Sudanese President Omar al-Bashir sought to derive benefit from both Gulf groupings, but Riyadh and Abu Dhabi apparently tired of his shifting loyalties. And when Bashir looked set to fall in early 2019 as a popular uprising took hold, they backed the military regime that ousted him, pledging $3 billion in aid. That support seemed to embolden the generals to crack down on democracy activists and drag their heels over negotiations towards civilian rule. Sudanese feared the Gulf powers were trying to hijack their revolution. Indeed, the US appears to have warned against such an outcome.

A transitional power-sharing agreement was eventually agreed, with elections scheduled for 2022. Questions remain, however, about the army’s willingness to abide by the deal, especially if it comes under pressure from Riyadh and Abu Dhabi to stall democratic reforms. The trigger for that might be the resurgence of Islamist parties, particularly if encouraged by Qatar and Turkey. Indeed, some speculate that Ankara is already doing so: that its military intervention in Libya may be part of a plan to bolster support for opponents of the Sudanese political transition.

In Somalia, the region’s most fragile country, the rivalry has deepened existing divisions, with the UAE developing ports in the breakaway region of Somaliland and the semi-autonomous Puntland. The engagement has created tensions with the Mogadishu government of President Mohamed Abdullahi Mohamed, which has accused the UAE of threatening the stability of the country. Abu Dhabi, in turn, sees Mogadishu as being too close to Qatar. The Qataris have run development projects, provided military equipment and plan to build a new port. Turkey, meanwhile, is a big foreign investor and provider of aid, while Turkish companies operate Mogadishu’s port and airport. Ankara also trains the country’s security forces battling al-Shabab insurgents and appears set to conduct offshore oil exploration.

Saudi Arabia and the UAE’s support for Ethiopia’s premier, Abiy Ahmed, has so far been seen in a broadly positive light because of Ahmed’s commitment to democratic reform and their role in brokering a much heralded peace treaty between Addis Ababa and its long-time foe Eritrea. Abu Dhabi backed his leadership with $3 billion in financial aid and investment and announced plans to build an oil pipeline linking land-locked Ethiopia to the Eritrean port of Assab. Yet the Ethiopian leader seems opposed to choosing sides in the Gulf conflict, leaving the door open for Qatar and Turkey. He paid an official visit to Doha in March last year to discuss bilateral relations, in particular economic cooperation, while Turkey remains the second-biggest investor in Ethiopia.

Ahmed’s neutrality, though, could be challenged as the rival Gulf factions compete for access to the Ethiopian economy which is opening up through planned privatisations. He will need to be careful to balance their interests with the demands of an assertive, ethnically-diverse population that has felt short-changed by overseas investment. In 2016, mass anti-government demonstrations over political and economic marginalisation targeted foreign firms.

In an ostensible bid to ease tensions in the Horn of Africa and bolster stability, a Saudi-led Red Sea  forum aimed at improving local cooperation on trade, investment, security and political issues was launched in January. But the exclusion of Ethiopia and Somaliland due to regional disputes does not bode well. Neither does a perception that Riyadh may merely turn the forum into an anti-Iranian security alliance.

The Horn of Africa has over the years benefited significantly from Gulf countries’ economic overtures and could continue to do so, but in exporting their rivalries to the troubled region just as some states begin to show signs of political progress they risk undermining the very stability they profess to want to advance. Adrian Stones is a director at Alaco, a London-based business intelligence consultancy. Yigal Chazan is the head of content at Alaco, a London-based business intelligence consultancy.