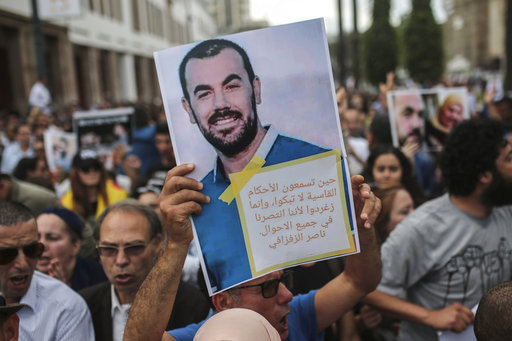 Repressive Arab regimes are taking advantage of the Covid-19 pandemic to crack down on the opposition, freedom of speech, independent media, and anything they consider a threat to their control of power. Almost no country in the region is spared by the other virus, the virus of repression. Here are examples taking place this week in Morocco, Egypt and Algeria.

A prominent Moroccan journalist and activist was Wednesday placed in pre-trial detention on charges of rape and receiving foreign funds for the purpose of harming “state security”, the justice ministry said. Omar Radi has been transferred to Oukacha prison in Casablanca and his trial will begin on September 22, the ministry said in a statement.

The prosecutor has requested that the investigating judge look into “offences relating to indecent assault with violence and rape” after a “citizen filed a complaint”.   Radi is also the subject of an investigation into the receipt of “funds from foreign parties with the goal of harming internal state security”.  He cultivated “contacts with agents of foreign countries in order to undermine Morocco’s diplomatic position,” the statement said.

The journalist has since been repeatedly questioned by the judicial police. “I have never been and never will be in the service of a foreign power… I am neither a spy nor in the pay of another country as an agent,” he said.  Shortly before his hearing on Thursday, Radi’s supporters released a video in which he dismissed the latest accusation as “ridiculous” and a form of revenge following the Amnesty report. “Journalists who criticise the security approach in Morocco are the most vulnerable to reprisals,” he said.

In March, the 33-year-old activist was sentenced to a four-month suspended prison sentence for  criticising a judge.   A coalition of nine human rights and media organisations, including Reporters Without Borders, on Wednesday called on Moroccan authorities to “cease intimidation” of Radi.  “Radi has been targeted by the authorities for his critical investigations… as one of the few journalists in Morocco who covers the corruption and business relations of the monarchy and its networks,” a statement by these organisations said.  It further urged the United Nations and the US Department of State, among others, to “strongly denounce the arbitrary summons and false accusations levelled against him by authorities”. (AFP)

An Egyptian court Wednesday jailed the sixth woman in a week over TikTok videos, deeming the clips in which she dances and lip-syncs to popular songs to be “inciting debauchery”, a judicial source said.  The sentencing of Manar Samy to three years imprisonment is the latest such ruling against popular female social media users in Egypt over content posted to the video-sharing app TikTok and Instagram.

Samy was arrested earlier in July on charges of “inciting debauchery, immorality and stirring up instincts” through her online videos, according to a prosecution statement.

Prosecutors found her videos — in which she dances and lip-syncs to popular music — to be “offensive to public decency” and to have been posted “with the aim of committing prostitution”.   According to the judicial source, the verdict can be appealed and “includes a fine of 300,000 Egyptian pounds ($19,000)”. The sentence can be suspended if Samy pays a bail of 20,000 pounds, the source added.

Wednesday’s ruling came days after another court sentenced five female social media influencers, Haneen Hossam, Mowada al-Adham and three others, to two years each in jail over content posted to TikTok. In their short videos on the app, the young women appear doing satirical lip-syncs, comedic skits, dance videos and voice-overs — content that is widely popular around the world on the mobile app. Hossam was arrested in April after posting a short clip on social media saying that girls could make money by working with her, a message that was interpreted as a call for prostitution.

In May, authorities arrested Adham, who had posted satirical videos on TikTok and Instagram. The targeting of female influencers rekindled a heated debate in the deeply conservative Muslim country over what constitutes individual freedoms and “social norms”. The clampdown is however not unusual in Egypt, where several belly dancers and pop singers have been targeted in recent years over online content deemed too racy or suggestive.

Egypt has in recent years enforced strict internet controls through laws allowing authorities to block websites seen as a threat to national security and to monitor personal social media accounts with over 5,000 followers.(AFP)

Although the two men were eventually released after intense domestic and international pressure, this latest round of arrests triggered dismay and anger in Algeria and abroad with the court issuing bogus charges. Moncef Ait Kaci is accused of having received foreign funding to practice journalism. All it took for the prosecution was to show that he got paid an honorarium to report on behalf of France 24. Ait Kaci is also accused of having covered political events in Algeria for the benefit of Lebanon’s Median Group, also working for France 24.  The government’s attitude is rather stunning considering that Moncef Ait Kaci had been subjected to a background investigation supervised by the National Gendarmerie in the summer of 2019 before he was issued his accreditation by the Ministry of Communication.  Independent legal experts and lawyers say this represents a continuation of arbitrary arrests and treatment reserved by the Algerian courts to journalists.

Ramdane Rahmouni was also investigated prior to receiving media accreditation. On 4 July, Rahmouni, who heads up communications agency MSCom, was hired by France 24 to manage the technical aspects of an exclusive interview with President Tebboune. Ironically, following the France 24 interview, President Tebboune congratulated Rahmouni in person for his “excellent work.”  Just 20 days later, Rahmouni finds himself facing five charges, including undermining national unity and intelligence with a foreign power. His sister, a lawyer established in France, stated on her Facebook page that her brother was “the victim of a clan war within the Algerian regime.

Meanwhile, Hirak activist Brahim Laami was sentenced on Thursday, to 18 months in prison and a million dinars in fine by a court in Bordj Bou Arreridj. Laami was placed in pre-trial detention on 3 June, while he was distributing food aid to poor families, according to the National Committee for the Defense of Detainees (CNLD).