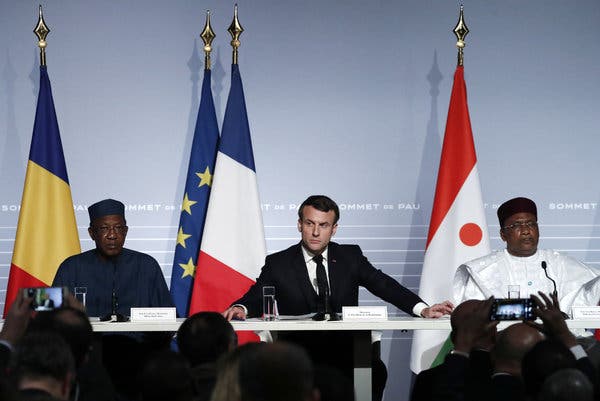 Macron with Sahel leaders
Despite vowing to stop propping up strongmen in Africa, France is backing a Libyan warlord and Chad’s dictator.

Many welcomed French President Emmanuel Macron’s promise in 2017 to end what was known as “Francafrique”, or France’s sphere of influence over its former colonies in Africa. But many say France is still up to its old games.

In Libya, Macron has thrown his lot behind the renegade military commander Khalifa Haftar, secretly supplying arms and training despite the UN and Libya’s former colonial power, Italy, backing the government in Tripoli. Forces loyal to Haftar have blockaded oil ports and have stopped pipelines, strangling the economy of much-needed funds.

But is it all about the oil?

“Really what Macron has presented is the case for a changed relationship with Africa, not so much a reducing or a retreat from the continent, but much more for putting the relationship on to a new footing,” Paul Melly, consulting fellow at Chatham House, tells Al Jazeera.

“And you can see that most strongly in the relationship with the West African countries, and particularly the very troubled Sahel region on the margins of the Sahara where Macron has argued the case for much more of a partnership approach but also economic reforms.”

Melly adds that France has “long-standing traditional economic and security interests” in a range of countries, from Chad right down through Central Africa, that do not have a good governance record.

Brexit: What does it mean for the UK economy?

“Get Brexit done” – that was the slogan that won the 2019 election for British Prime Minister Boris Johnson.

Britain left the European Union this year but the kind of relationship the country has with the rest of Europe has yet to be decided and the process is unlikely to start until March.

The economic cost of Brexit hit $170 billion, according to Bloomberg Economics, and that number could rise by another $100 billion by the end of 2020.

Counting the Cost examines what Brexit means for one of the worst-performing industrial economies.

Bilal Hafeez, CEO of Macro Hive, says the EU is the UK’s largest trading partner, and when the UK was a member of the European Union it enjoyed a free trade agreement.

He adds: “So whatever the agreement is with the European Union, at the end of this year it will not be as free as it once was in terms of frictionless trade …”