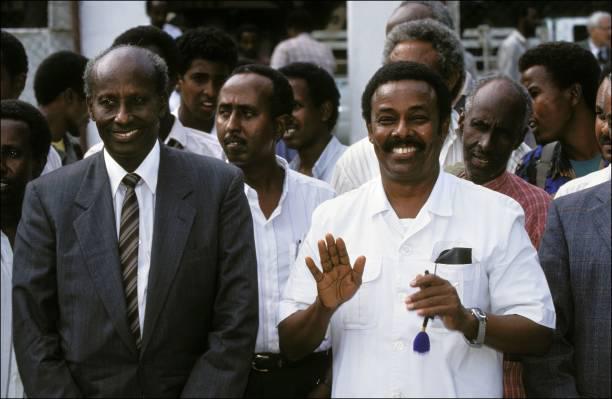 Former Somali president Ali Mahdi Mohamed (R)
March 10, 2021
Former Somalia president Ali Mahdi Muhammad is dead.
Ali Mahdi Muhammad: Former Somalia president dies in Nairobi The late Ali Mahdi Muhammad. He died in Nairobi aged 82. Photo: Mohamed Abdi. Source: Twitter
Mahdi who served as president of Somalia from January 26, 1991, to January 3, 1997, lost his life aged 82 after reportedly contracting the deadly COVID-19 disease. His death was confirmed by ex-Somalia president Sharif Sheikh Ahmed in a tweet on Thursday, March 10, evening.
Mahdi was the fourth Somalia head of state after he was elected by the United Somali Congress in January 1991 after Siad Barre was overthrown by rebellious forces in Mogadishu
Mahdi served during the civil war period and was unable to govern the entire country as he battled for power with other faction leaders in the southern region and with autonomous subnational entities in the north. He was born in born in 1939 in Johwar town and began his career as a businessman before venturing into politics in 1968 when he vied for a parliamentary seat. The 82-year-old will be boried in Mogadishu
previous post