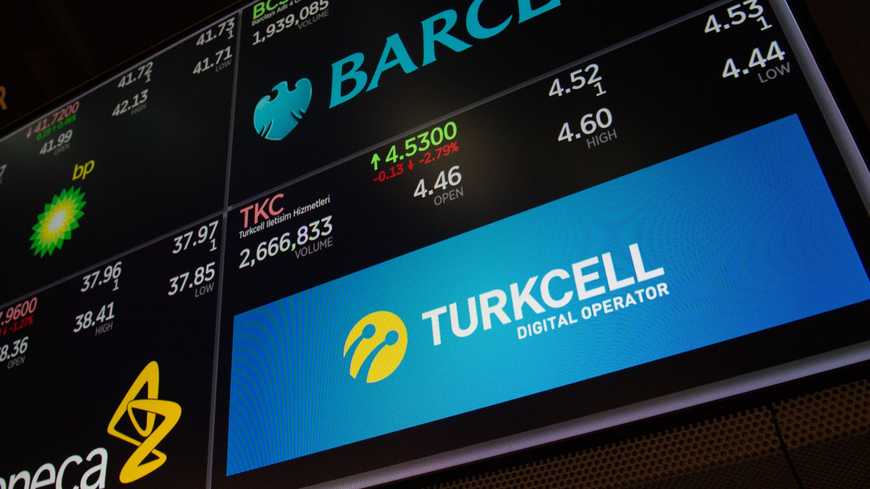 The symbol of Turkish mobile phone operator Turkcell is displayed at the closing bell of the Dow Industrial Average at the New York Stock Exchange on Aug. 16, 2018, in New York. Sweden’s Telia recently sold its Turkcell stake for a price seen as a sign of the company’s desire to leave Turkey. Photo by BRYAN R. SMITH/AFP via Getty Images.

An exodus of foreign investors has aggravated Turkey’s economic woes and could prove disastrous for the AKP’s political future.

Turkey’s Justice and Development Party (AKP), in power for almost 18 years, is facing an alarming flight of foreign investors after years of abundant foreign funds that helped the economy grow and the party sustain its rule. The flight has contributed to Turkey’s hard-currency crunch and could prove disastrous for the AKP’s political future.

What drew investors to Turkey initially was not the AKP rule itself, but a far-reaching economic recovery program, sponsored by the International Monetary Fund, that the previous government had launched after a major crisis in 2001. Global economic trends generated further tailwinds for the AKP and a staggering $525 billion streamed into Turkey over 15 years, including direct investments, stock exchange investments and external loans. This meant an average inflow of $35 billion per year or almost the equivalent of the $41 billion total that Turkey had managed to attract over the 18 years to 2002, when the AKP came to power.

Riding the wave of foreign funds and economic growth, the AKP sustained its political ascent, which culminated in the introduction of an executive presidency system in 2018 that bestowed sweeping “one-man” powers to President Recep Tayyip Erdogan.

Since 2018, however, the tide has turned, with the AKP losing not only foreign funds but also political support, as evidenced by the drubbing it took in the municipal polls last year. The flight of foreign capital has contributed to the depletion of Turkey’s foreign currency reserves, which dropped by $25 billion in the first four months of the year. The AKP has little to offer foreigners to revive their investment appetite. And without foreign funds, keeping the economy rolling is a tall order. Thus, the exodus of foreign investors might prove a critical downside precipitating the AKP’s political fall.

Foreign capital inflows have been crucial in shaping the economic and thus political fates of emerging-economy countries such as Turkey, which need external propping up to grow due to low levels of domestic savings. The amount of such flows, be they direct investments, loans or money put in stock shares and government bonds, also bears on the value of local currencies against the dollar, which is a reserve currency. Ample inflows keep foreign-exchange prices low, which, in turn, facilitate imports, including the equipment and intermediate goods that domestic industries need

Inadequate foreign-currency earnings, as in the case of Turkey, result in current account deficits, which countries try to finance with fresh foreign capital inflows to keep their economies rolling. But when inflows fall short of covering the gap, the hard currency supply fails to meet the demand, leading to an increase in hard currency prices. As a result, various economic balances collapse. Inflation soars and consumer demand sags, causing the economy to slow or contract.

Attracting foreign funds depends not only on the country’s economic allure, but also on global conjunctures. The AKP, which came to power in November 2002, took advantage of abundant global liquidity prior to the 2008 financial crisis. Unprecedented amounts of foreign capital poured into the banking sector and enterprises the government privatized. Likewise, borrowing from abroad was rather easy. Barring some sporadic fluctuations, this bonanza continued through 2017 for Turkey.

In the past 2½ years, however, the country has seen an outflow of $15 billion in foreign capital. Its current account deficit is now financed with the central bank’s foreign currency reserves, secured in part through currency swap deals. Foreign direct investments have almost ground to a halt, except for real estate purchases by foreigners, which account for $10 billion in the $14 billion total.

Moreover, existing investors are exiting the country. Most recently, Sweden’s Telia — a founding partner in Turkey’s leading mobile phone operator Turkcell — sold its 24% stake for a mere $530 million, a price that observers saw as a sign of the company’s eagerness to leave Turkey.

Soon after its departure, Volkswagen dropped a plan to build a major plant in western Turkey despite generous incentives, including a government guarantee to buy 40,000 vehicles per year. The decision, announced July 1, was attributed to the economic fallout of the COVID-19 pandemic, but the German carmaker was already vacillating last fall amid economic jitters over Turkey’s military incursion in Syria.

In an intriguing twist shortly after the decision was announced, Turkey’s Competition Board launched an investigation into Volkswagen and other German giants — Audi, Porsche, Mercedes-Benz and BMW — to determine whether they broke competition rules.

Foreigners have also been withdrawing from portfolio investments in Turkey, including in stock shares and government bonds.

According to Treasury and Finance Ministry figures, Turkey’s domestic debt stock stood at about 1 trillion Turkish liras ($145.6 billion) at the end of May. The share of foreign-held debt was only 4.3%, down from more than 23% in 2012.

On the stock exchange, where the flight has been most pronounced recently, foreign investments accounted for less than 50% in May, down from 65.8% in January. The foreigners’ share had hit a record 72.3% in November 2007.

Waning confidence in Turkey is the main driver of the exodus. The country’s risk premium — a measurement of confidence reflected in credit default swaps — has averaged over 400 basis points monthly in the past two years, which is at least the double of the risk premiums of peer economies. Of note, the rising risk premium has emerged as a hallmark of Erdogan’s executive presidency or one-man rule since 2018. So, in a sense, the flight of foreign investors reflects also Ankara’s growing isolation.