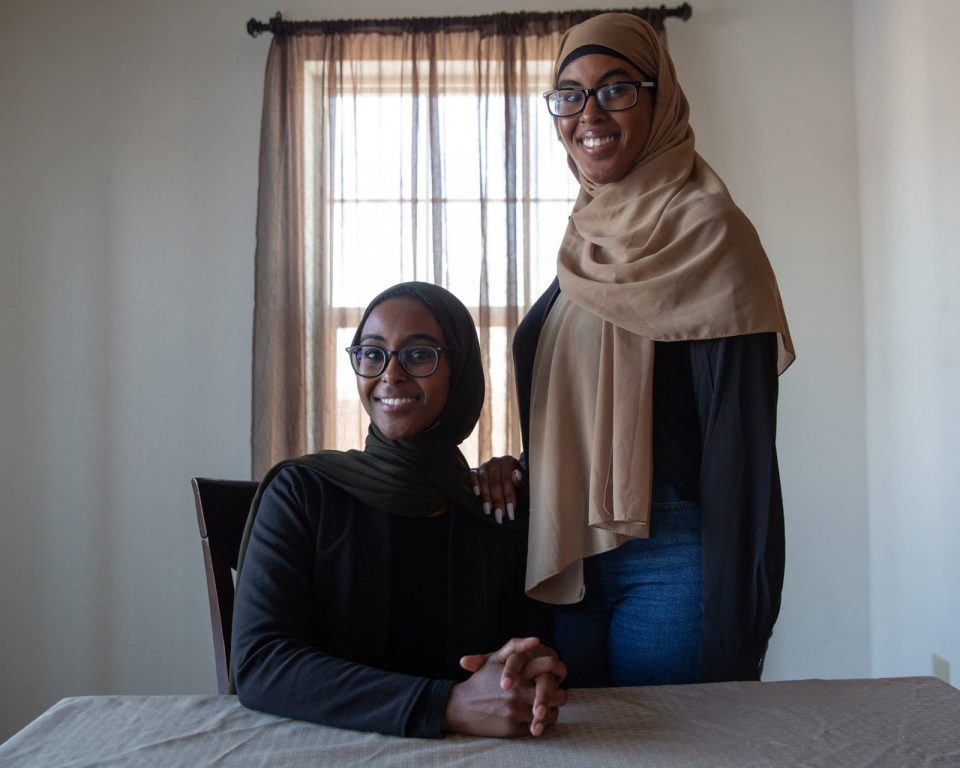 Sumaya Hassan was volunteering for a crisis line for victims of gender-based violence when she received a call from a Somali woman experiencing abuse.

At the end of a conversation, the caller expressed she would have called much sooner, had she known someone like Hassan — who spoke the same language and practiced the same religion — was there to help.

Recognizing a lack of mental health resources catered to Muslims in a state with a fairly large Muslim population, Sumaya, 26, and her sister Fadumo Hassan founded Open Minds Initiative earlier this fall. The Minnesota-based organization provides a crisis hotline that they hope will help address the stigma surrounding seeking help for mental health issues in the Muslim community.

“Oftentimes when we’re going through things, we talk to family and friends. Some people, if they’re connected to a masjid, they may go to their imam. We want Minnesota Muslim Helpline to be another tool,” said Sumaya Hassan, a master’s student in public administration with the University of Colorado-Denver’s online program.

The helpline operates Tuesdays and Fridays from 6 to 9 p.m., offering counseling and referrals to resources to callers. The service takes calls related to mental health and a variety of other issues, including bullying, questions of identity and Islamophobia.

Fadumo Hassan, 23, who is getting her master’s degree in counseling psychology at St. Mary’s University of Minnesota, said many community members struggling with mental illness pursue only religious help for their ailment, or no help at all.

Despite more awareness about mental health in the Somali and Muslim communities in recent years, the stigma surrounding seeking help for mental health issues persists, said Abdisalam Adam, assistant imam and co-founder of Dar Al-Hijrah in the Cedar-Riverside neighborhood of Minneapolis.

Community members are often reluctant to seek professional help due to confidence in faith-based healing as the sole solution to mental health issues and not wanting to bring shame to their family, he said.

“Issues of your family name and identity and things like that play a role in everyone trying to be held … to a higher standard,” Adam said.

Adam said many imams encourage people to seek professional mental health care while turning to faith leaders for spiritual guidance and healing. Bringing more awareness to mental health issues in the community helps prevent individuals from being ostracized or suffering in silence, he said.

“As imams and religious leaders, we tell people to do both,” Adam said. “They are not contradictory but they compliment each other … the faith-based treatment of reciting the Quran on the person and at the same time going to professional help.”

Other models around the world

Crisis hotlines provide emergency counseling to individuals over the phone and refer resources to callers for longer-term assistance. Though initially created to help individuals experiencing suicidal thoughts, many helplines have expanded to assist callers with a range of issues.

Several hotlines catered to Muslims exist worldwide, including the Muslim Youth Helpline in the United Kingdom, and Canada-based helplines Nisa for Muslim women and Naseeha Youth.

A 2010 evaluation of crisis hotline outcomes published by the American Association of Suicidology found that the resource can significantly reduce suicidality by the end of the call, and help with psychological pain and feelings of hopelessness over time.

Sue Abderholden, executive director of the Minnesota chapter of the National Alliance on Mental Illness, said she has heard from many individuals who’ve said they called helplines and received a bit of hope that got them to the next day.

“It is really important that people, no matter their culture, their race, their language, [or] their sexual orientation, are able to find help when they’re experiencing a mental health crisis,” Abderholden said.

As Open Minds Initiative awaits nonprofit status, the sisters have been taking the calls themselves since its launch in mid-October while they recruit and train volunteers. They’ve received 14 calls in two months, ranging from talking with a teen about bullying to questions about the relationship between dating and religion.

Though they’re the only two individuals in the organization, the sisters hope to expand Open Minds beyond the helpline and into a center that would provide various services, and eventually establish multiple chapters nationwide.

“We really want to be able to get that conversation started so that we can help bridge the gap,” Sumaya Hassan said. “So many young people have one foot in one culture and one foot in the other, and so they don’t necessarily always have the space to be able to talk about what they’re going through to their families.”