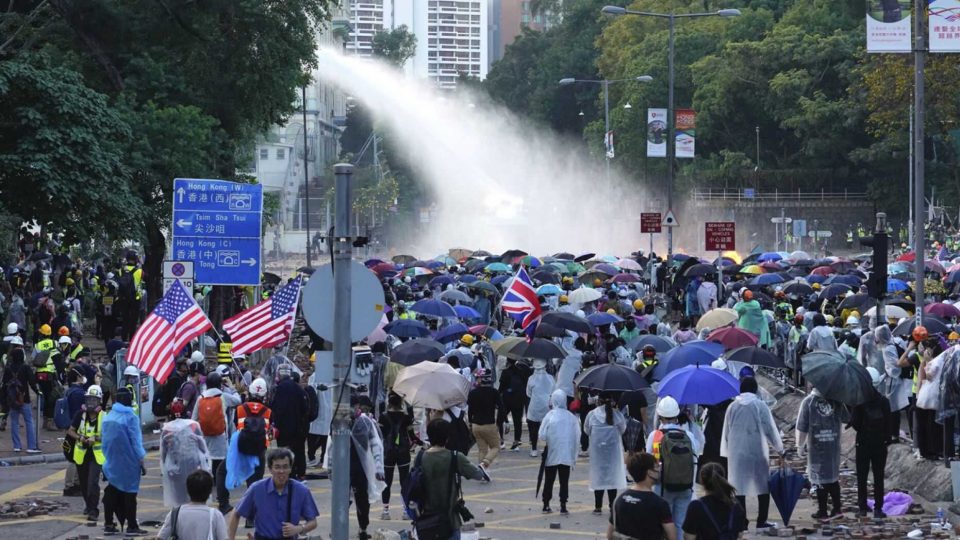 Hong Kong riot police and protesters have waged a day-long battle at a university, during which officers fired teargas and a water cannon and drove an armoured vehicle at demonstrators who were throwing molotov cocktails.

Polytechnic University, which has been taken over by protesters since clashes last week, became the site on Sunday of some of the longest, tensest clashes between anti-government demonstrators and police of the last five months.

As a helicopter hovered overhead, riot police shot blue-dyed liquid laced with pepper spray at protesters who had formed a frontline on a street outside the campus. Protesters on a roof of the university used catapults as well as bows to shoot back at police, striking one officer in the calf with an arrow.

Protesters set on fire a pedestrian bridge packed with furniture, umbrellas and other materials, causing a blaze that was later put out by firefighters. They also occupied a flyover and threw petrol bombs at riot police, setting off explosions and sending flames into the sky. An armoured vehicle drove towards protesters but was stopped by a barricade and pelted with molotov cocktails until it caught fire. 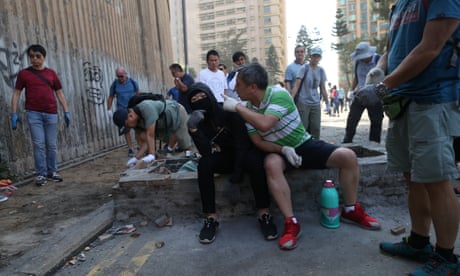 The confrontation, a continuation of fighting from the night before, began in the morning when protesters were seen throwing bricks at residents trying to clear a blockaded road. It continued into the late evening, with police declaring the unrest a riot and warning that anyone who remained on the campus or assisted the perpetrators would be considered a rioter.

The university issued a statement calling on people to immediately leave the grounds. “The university is gravely concerned that the spiralling radical illicit activities will cause not only a tremendous safety threat on campus, but also class suspension over an indefinite period of time,” it said.

After rumours circulated the police had a sonic weapon on hand, officers clarified that a long-range acoustic device (LRAD) had been installed on an armoured vehicle but would only be used for broadcasting.

Political unrest has escalated dramatically in the last week as anti-government demonstrators have blocked transport links and roads, and paralysed parts of the city. After the Chinese president, Xi Jinping, delivered his first public remarks on the crisis on Thursday after more than five months of protests, People’s Liberation Army soldiers took to the streets on Saturday to help residents clear blocked roads.

Dressed in shorts and T-shirts and holding plastic buckets, the soldiers helped residents clear the protesters’ improvised barricades, a move demonstrators described as “clearance today, crackdown tomorrow”. The Hong Kong government said it had not requested the help, describing the soldiers’ excursion as a “voluntary activity”.

On Sunday, Chinese soldiers at a base near the university, some in riot gear, were seen monitoring the situation. The Global Times reported that police in Guangzhou were holding “counter-terrorism” exercises

The smell of teargas wafted over the university campus, which was turned into a battle station as first aid volunteers tended to injured protesters and others sorted supplies and prepared molotov cocktails. Protesters struck by the water were stripped and hosed down.

Activists have destroyed the tollbooths along the tunnel and built barricades on the road, blocking a major traffic artery. Roads leading into the university were strewn with bricks and nails, in an effort to slow down the police. Heeding calls, dozens of supporters had arrived and were pulling up more bricks.

“I really support them. I’ve joined every demonstration from 9 June to now,” said Lee, 68, a retired police officer who was helping arrange bricks. “They are boiling the frog alive,” he said, referring to China’s growing control over Hong Kong.

Clashes broke out in several other locations as some demonstrators sought to draw police away from the university.

After almost six months of weekly and now daily protests, Hong Kong’s crisis reached a new peak last week after two protest-related deaths, dozens of injuries, and what were seen as attacks on universities by the police.

Residents have become frustrated and impatient with the traffic disruptions, while others have grown alarmed by what they see as the protesters’ increasing violence and intolerance for those who disagree with them.

Hong Kong’s education bureau has called off lessons on Monday, after cancelling classes on Thursday and Friday out of safety concerns. Several universities have ended the semester early and sent foreign students home.

On Sunday, Hong Kong’s finance minister, Paul Chan, said the city was heading towards its worst recession since the 1997 handover, as tourist numbers have fallen, and stocks and retail sales have been hit.

Calvin See, 27, who works at a logistics company, said the disruptions and slowdown were hurting its revenues. He had come to help support the protesters at Polytechnic University after seeing calls for reinforcements.

“Those people on the front, they are putting their lives on the line to fight for what they believe … they are doing it for all of us,” said See.