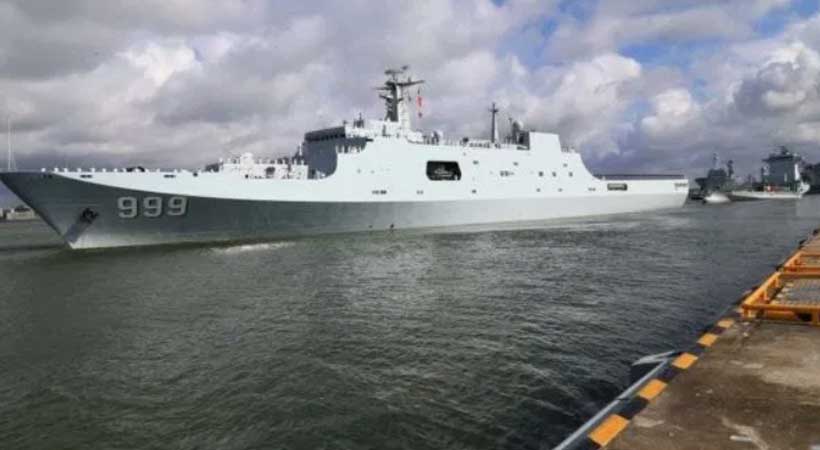 Ethiopia is gradually and steadily opening up doors and minds to international relations. Testament to this was when French President Macron sealed a deal with Ethiopian Prime Minister Abiy Ahmed when they met in March 2019. The French signalled plans to invest 2.8 Billion Euros in  hopes of awakening a sleeping African giant that Ethopia is. The agreement also includes a military component which includes provisions air-force cooperation, joint exercises, equipment purchases and as well as, most ambitiously, goals to reconstruct an Ethiopian Navy. But, there is just one problem, Ethiopia is a landlocked nation.

History is witness to Ethiopian naval ambitions and is also witness to the Ethopia’s loss of coastal territories to Eritrea, which is in the north of Ethopia. In a bitter border conflict that resulted in independent Eritrea, also spelled the dissolution of the Ethiopian Navy. Ever since, there was little reason to reconsider a navy but all that started to change in 2018.Sincecoming to office Ethiopian Prime Minister Abiy Ahmed has been putting his country’s affairs in order. He has worked on a peace deal with Eritrea and has been able to integrate Ethopia more closely with Djibouti, Somalia and Sudan. There has been significant process to liberalize parts of the economy, and all this has been doing while maintaining inter-ethnic tensions.

Nonetheless, the country still has a long way to go for Ethopia to rise from the ashes as an African a heavyweight power in East Africa. Their flourishing economy now ranks as Africa’s fastest growing and the vast human population of 102million citizens has grabbed the attention of great powers in line with the emerging role of Ethiopia the Prime Minister who wants to remake his country asa regional hub for commerce and trade. However, in order to reassure investors that the waters around the Horn of Africa are secure, especially considering the incidents of piracy, Adis Ababa feels obliged to step up and protect its maritime trading routes in order to perpetuate feelings of security and trust amongst its investors. This also happens to be one of Ethopia’s long-term geopolitical objectives.

What one can infer from the arguments presented above is that a naval entourage will carve the way forward for Ethopia. Re-establishing a maritime force to its overall drive will allow the country to push itself as a major player connecting Europe and Asia.

If Ethiopia believe they can convince European and Asian business by re-establishing a navy that the Horn of Africa is open for business at first glance it, they are mistaken. That is because a landlocked nation should seek a navy but, surprisingly, landlocked navies exist in many parts of the world. This is particularly relevant in countries where a river or a lake forms a national border. Thus, with the exception of the Caspian nations, landlocked navies operate strictly in major lakes or rivers. What makes Ethiopia’s case unique isthe fact that the State is seeking a blue water fleet to operate along the coast of the Horn of Africa. The Horn of Africa is spread over 727,000 mi².

An Ethiopian Navy would mean a win-win for the regional nations while the current coastal countries enjoy access to the world’s oceans but they lack the capabilities to patrol their waters and facilitate trade. Ethopia, however, has the opposite problem. It possesses the most resources but lacks a shoreline. Moreover, the regional coastal nations do not necessarily see an Ethiopian Navy as a threat but as a complementary force testament to this is acquisition of land in the island of Lamu as part of the Lamu Port-South Sudan-Ethiopia-Transport (Lapsset) project, a $24bn (£18bn) transport and infrastructure plan to link the Kenya and Ethopia. In short, the motivation for Ethiopia’s naval ambitions is it enables her to gain leverage in the regional maritime affairs and improve trading relations.

All things considered, Ethiopians would also have to develop the capabilities of their neighbors to reinforce their coastal entries so Ethiopia’s landlocked Navy would patrol and protect the waters of the Horn of Africa while also investing capital in stabilizing the coastal states. This trade-off would contribute to integrate the region economically and politically while reducing cross-border violence in an area that has been plagued for decades by territorial conflicts.

This geo-political manoeuvring is a welcomed change but we all know, talk is cheap. Constructing a navy from scratch is an expensive undertaking. If, the state of Ethopia could acquire a few dozen patrol boats and call it a day that is in fact what is most likely to occur in the next few years. And the patrol-only boats could be the Navy serving a symbolic purpose.

Eventually Addis Ababa will want a blue water Navy with military capabilities and that is when the real toil starts for it will require the state to train sailors, officers and commanders but also find suitable bases and procure larger vessels. This is a long-term project that will take decades to complete in the meantime the build-up of the Navy will be subject to future political and economic developments. And considering the long term commitment, that is required to construct a navy Ethiopia needs international partners.

The most immediate host for an Ethiopian Navy would be the Republic of Djibouti, the small but strategically important Nation which is already host to military bases from numerous countries including France, China and the United States of America. Djibouti also happens to enjoy close economic ties with Ethiopia. In fact, Ethiopia’s imports and exports go through the port of Doral, which is an extension of Djibouti port. However, the presence of foreign military bases in Djibouti means Ethiopian policymakers and Djibouti may not always have say over its own affairs and that is a security risk so even though Djibouti is where we will most likely see the first Ethiopian vessels set sail.

Adis Ababa would like to avoid putting all its eggs in one basket because if some political development results in the breakdown of relations between Ethiopia and Djibouti the Ethiopian Navy would be placed in a vulnerable position. So eventually, as the Ethiopian blue water navy becomes operational it will require basing rights in other countries convincing Eritrea will be difficult due to the their troublesome history that is still in living memory but basing rights in places like Misawa willbe necessary for the long term.

Nevertheless, in Somalia meanwhile relations between Addis Ababa andMogadishu have improved significantly and the Somalian ports of Kismayo and Pesasso are well suited for large navies. However, the activity of Al-Shabaab and the lack of infrastructure in Somalia impede close cooperation in the near future.

Countries such as Turkey, Saudi Arabia and Iran holding vested interests in the Horn of Africa, and also China and the United States there are however potential allies in the periphery such as France and the United Arab Emirates. France is the most obvious partner as its signed a deal to help re-establish the Ethiopian Navy and by doing so Paris is seeking to expand its influence beyond the francophone sphere into East Africa French multinational firms and a whole host of other defence corporations seeking to capitalize on the growing and liberalizing Ethiopian economy.

Another potential partner is the United Arab Emirates, which currently has a naval presence in Eritrea as well as unrecognized Somaliland. What is interesting here is that France operates a naval base in the United Arab Emirates, and the to maintain a strategic level of military cooperation with them.Since they operate in many of the same areas and if Addis Ababa, plays its cards right it could forge a lasting partnership with France. And the United Arab Emirates which would go along way in developing a capable Navy it goes without saying that Ethiopia’s pursuit of regional power could become a mega power in the region. This in turn would declare Prime Minister Abbey as scrupulous, hyper successful leader. He has embarked on a roadmap for reconciliation and restoration, as of now. But there remain pockets of secessionists across the country and social unrest continues to flare up from time to time as recently as June 2019, when there was a failed coup attempt. The armed forces tried to takeover a regional centre in the country.

The whereabouts of the rogue General who orchestrated the coup remain unknown. Events like these revealed that the central government still does not have full control over the domestic political situation despite all the progress being made. Therefore, beyond the obvious geographic shortcomings for a blue water navy of Ethiopia must stabilize its internal landscape or else the government may face a situation where it would be left with no choice but to hit the brakes on its ambitious naval project.