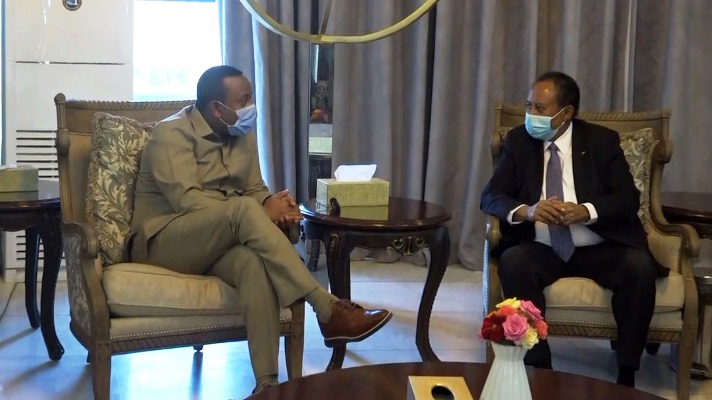 The Ethiopian delegation led by Prime Minister Dr Abiy arrived in Khartoum this morning for an official working visit.

The visit comes at the heels of the one-year anniversary of the signing of the Sudan’s constitutional declaration according to a statement issued by office of the Prime Minister.

During the discussion, Prime Minister Dr Abiy congratulated the Sudanese government for the millstones achieved since then and for the current on-going political discussions.

The Prime Minister also highlighted that the fate of both countries is intertwined and rooted in longstanding historic and strategic relations.

He reiterated “we are one people, one family,” highlighting that any issues, including in relations to GERD and borders, can be addressed amicably through continued and sustained good faith discussion.

The Sudan’s Prime Minister for his part emphasized the complementary nature of both countries which compels them to work together for mutual benefits.

With strengthened collaborations on the economic front, Ethiopia and Sudan’s economies can be a catalyst for progress in the Horn region and Africa, he said.

Both parties affirmed solidarity for each other’s endeavours and agreed to settle any issues through continued dialogue and negotiations.