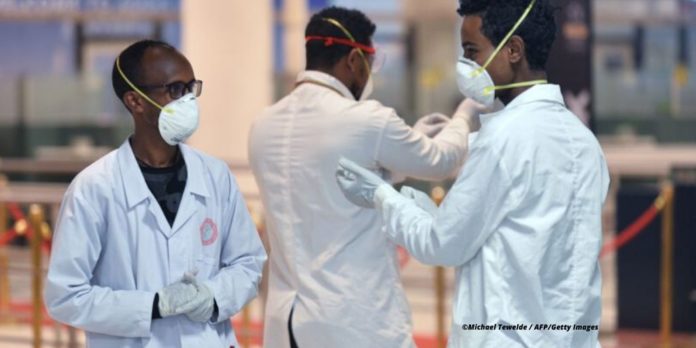 Ethiopia has confirmed its first case of the new coronavirus. Horndiplomat reports

Takele Uma Banti, the mayor of the capital Addis Ababa, tweeted that a Japanese citizen was the person affected.

“We should avoid meetings and hand contacts,” the mayor wrote on Twitter.

According to Ethiopia Public Health Institute, the patient is a 48 year old Japanese who arrived in Addis Abeba on March 04. His first destination was Japan and he traveled via Burkina Faso before arriving in Addis.

He was tested for virus yesterday and was subsequently confirmed positive.

Health Cabinet Secretary Mutahi Kagwe on Friday said the patient is a Kenyan who travelled from US via London.

He said that although patient, a Kenyan, is stable and eating, she will not be released from hospital until she is confirmed negative.

The woman is at Kenyatta National Hospital’s Infectious Disease Unit.

The government says it has traced all contacts the patient made since her arrival.

Consequently, Kenya has suspended all travel outside the country unless necessary.

Public gatherings are also suspended, including all inter-schools events.

This is a developing story, check back for Updates.