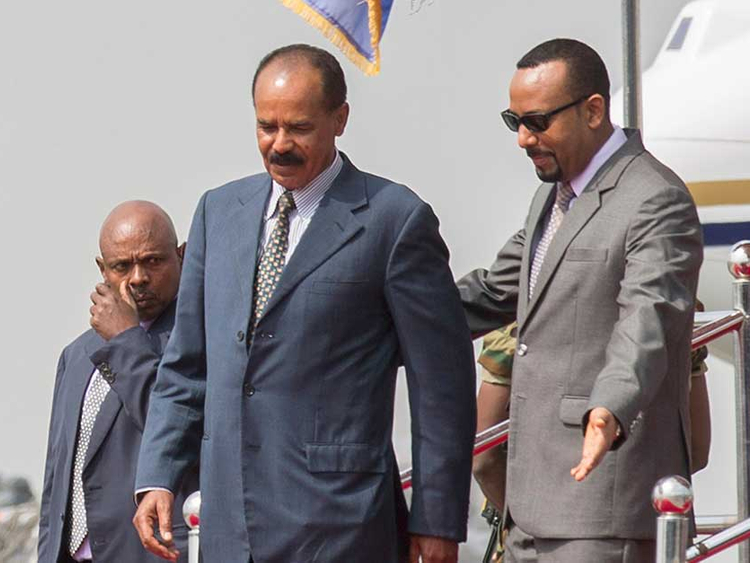 Eritrean President Isaias Afwerki flew to Addis Ababa Wednesday for his first meeting with the Ethiopian prime minister since Abiy Ahmed won the Nobel Peace Prize for initiating a thaw between the sparring neighbours.

Eritrea and Ethiopia fought a border war in 1998-2000 that left an estimated 80,000 dead before a prolonged stalemate took hold.

Shortly after he came to power last year, Abiy, 43, stunned observers at home and abroad by reaching out to Isaias and creating momentum for a peace deal.

“During his stay in Ethiopia, the Eritrean president is expected to meet with Ethiopian officials to discuss bilateral issues,” Fana said.

Isaias was accompanied by Foreign Minister Osman Saleh and Yemane Gebreab, a presidential advisor, according to a post on Twitter by Eritrean Information Minister Yemane G. Meskel.

Abiy’s office and a spokesman for Ethiopia’s foreign affairs ministry did not immediately respond to a request for comment.
After the two leaders first met and embraced on the tarmac in Asmara, the Eritrean capital, last year, they reopened embassies, resumed flights and held a series of meetings across the region.

But the initial optimism fuelled by these gestures has faded, and citizens of both countries complain that they are still waiting for meaningful change.

During the Nobel award ceremony in Oslo earlier this month, Norwegian Nobel Committee chairwoman Berit Reiss-Anderson noted that the peace process “seems to be at a standstill”, with border crossings closed and little apparent progress on border demarcation efforts.

She said the committee hoped the Nobel would “spur the parties to further implementation of the peace treaties”.
Isaias and Abiy last met in Asmara in July.

Upon returning from Oslo to Ethiopia this month, Abiy expressed hope that the two leaders would be able to meet “soon”.
Abiy wrote on Twitter Wednesday that he was “happy to welcome again to his second home my comrade-in-peace, President Isaias Afeworki and his delegation.”