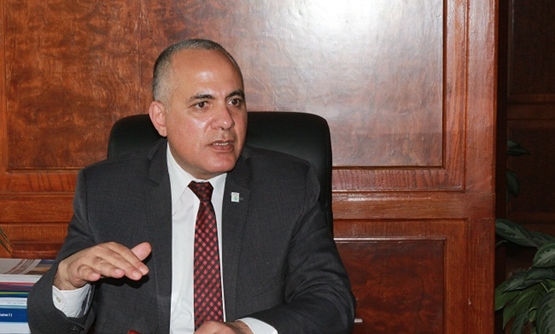 Egyptian Minister of Water Resources, Mohamed Abdulati
April 9, 2020 at 2:00 am

Egypt will begin construction of a number of water projects in South Sudan and Uganda, the Egyptian Minister of Water Resources and Irrigation Mohamed Abdel-Ati announced yesterday.

“Egypt has started the construction of six underground drinking water stations in the Republic of South Sudan,” Abdel-Ati told reporters, adding that the projects were contracted in 2019.

He pointed out that the projects were being funded by Egypt, explaining that they had come as part of a government-initiated developmental strategy in the water sector.

The Egyptian official hailed what he described as: “Several success stories of bilateral cooperation on mega projects between the African countries, especially the Nile Basin ones.”

Abdel-Ati also noted that his country would build five rainwater harvesting dams in Uganda for drinking and domestic use, adding that the dams would consist of ground reservoir stations to aggregate rainwater.

On Monday, an official source at the Egyptian cabinet reported that more than 90 per cent of Egypt’s major national projects had been suspended following the outbreak of the novel coronavirus.

The announcement comes as Cairo faces an ongoing dispute with Ethiopia and Sudan over the Grand Ethiopian Renaissance Dam (GERD), which Addis Ababa is building near its border with Sudan, claiming that it would provide the country with “much-needed electricity and economic regeneration”. Egypt believes that when the dam is filled, already scarce water supplies from the Nile will be restricted.

Egypt is almost entirely dependent on Nile water, receiving around 55.5 million cubic metres a year from the river, and believes that filling the dam will affect the water required for drinking, agriculture and electricity.

After three-way talks between the African countries failed, they settled with the US as an external mediator.

In November, the US brokered a meeting in Washington, setting 15 January as a deadline for resolving the dispute, which at one point looked set to break into a military conflict between Cairo and Addis Ababa. They agreed on four rounds of negotiations. The first was held in the Ethiopian capital, the second in Cairo and the third in Khartoum.

Despite discussions looking optimistic, over Christmas they stalled again after the third round of discussions in the Sudanese capital.

Cairo wants Ethiopia to guarantee that Egypt will receive 40 billion cubic metres or more of water from the Nile. Ethiopian Irrigation Minister Seleshi Bekele claims that Egypt has abandoned this demand, but Egypt insists it has not and issued a statement to this effect.

There is also unresolved conflict over the speed at which the dam will be filled, with Egypt fearing that if it is filled too quickly, it could affect the electricity generated by the Aswan High Dam. Egypt wants it to be filled over a minimum period of seven years , whilst Ethiopia is pushing for four years.