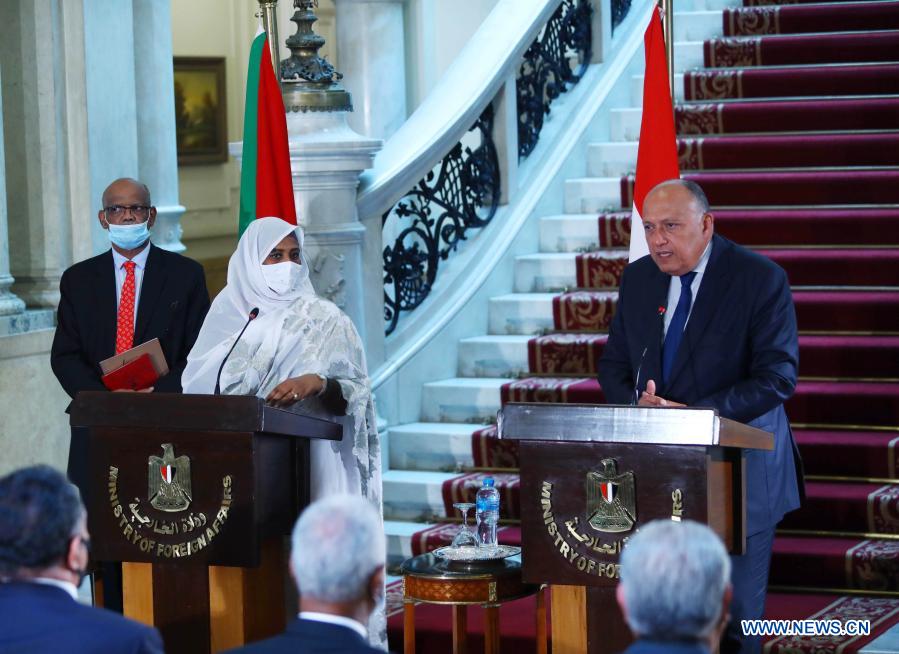 The remarks came during the two ministers meeting in Egypt’s capital Cairo, where the two diplomats tackled a number of issues of common interest, according to a joint press statement released after the meeting.

The two ministers highlighted the importance of reaching a binding legal agreement on filling and operating the Grand Ethiopian Renaissance Dam (GERD) that would achieve the interests of the three countries, preserve the water rights of Egypt and Sudan, and limit the damages of the project to the two downstream countries.

Shoukry and his Sudanese counterpart also stressed that they have political will and a serious desire to achieve this goal at the earliest possible opportunity, urging Ethiopia to show goodwill and engage in an effective negotiation process.

They also expressed appreciation for the efforts made by South Africa during its presidency of the African Union in guiding the path of the GERD negotiations.

The two ministers also affirmed that their countries are adhered to the proposal made by Sudan and supported by Egypt on developing the negotiation mechanism sponsored by the African Union through the formation of an international quartet led and managed by the Democratic Republic of Congo (DRC), the current chair of the African Union.

Ethiopia started building the GERD in 2011, while Egypt is concerned that the dam might affect its 55.5-billion-cubic-meter annual share of the Nile water. Sudan has recently been raising similar concerns over the 4-billion-U.S.-dollar dam.

Over the past few years, tripartite talks on the rules of filling and operating the GERD, with a total capacity of 74 billion cubic meters, have been fruitless, including the early ones hosted by Washington and the recent ones by the African Union.

Meanwhile, the two ministers reviewed various regional and international issues of common interest, including the developments in Libya, Palestine, Syria, Yemen and other countries in the region, according to the statement,

During the talks, the two sides discussed opportunities to develop investment cooperation as well as the available fields for Egyptian companies to invest in Sudan in a way that achieves mutual interests of both countries.

The ministers’ discussions also dealt with means of boosting trade relations and economic exchange between the two countries. Enditem