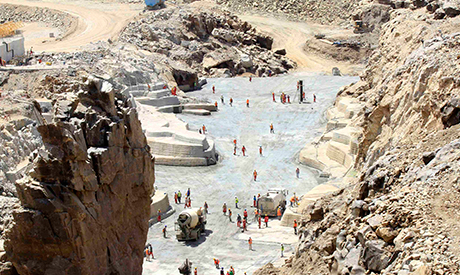 Egypt has confirmed its participation in a fresh round of talks mediated by the African Union (AU) on Sunday over the disputed Grand Ethiopian Renaissance Dam (GERD), despite of a recent spat between Cairo and Addis Ababa over the dam.

Sudan will also participate in the GERD negotiations under the leadership of the current AU chair, South Africa, with the talks due to be held after a one-month deadlock

Sudan will also participate in the GERD negotiations under the leadership of the current AU chair, South Africa, with the talks due to be held after a one-month deadlock caused by Khartoum’s withdrawal from the talks, when it objected to the adopted methodology of the talks.

A source told Sudanese news agency SUNA that “the meeting will discuss Sudan’s proposal, aimed at reactivating the negotiations by giving a greater role to the AU experts” to reach a binding legal agreement on the GERD, which Ethiopia started building on the Blue Nile in 2011.

The European Union (EU), which acts as an observer to the negotiations, has welcomed the resumption of the GERD talks, describing it as one that “offers an important opportunity for progress towards an agreement on the filling and related operations of the dam.”

“As an observer to the talks, the EU encourages all the parties to show the political will to engage in this round of talks in a constructive and open-minded spirit,” a statement by the spokesperson said.

Mufti, Ethiopia’s former ambassador to Cairo, claimed that Egypt “has turned Ethiopia into a threat” and that it would cause thirst and hunger for Egyptians, reflecting on the “depth of the internal crisis in Egypt.”

Egypt and Sudan have been in talks with Ethiopia for a decade to reach a legally binding agreement on the filling and operating of the $4.8 billion near-complete mega dam.

South Africa has been mediating negotiations recently between Egypt, Sudan, and Ethiopia to resolve the dispute.

The GERD, built 15 kilometres from the Ethiopian border with Sudan, has been a source of contention between the three countries since its construction began in 2011.

The first filling of the controversial dam took place last summer, despite Ethiopia not having reached a binding agreement with its downstream neighbours.

Cairo fears the massive hydropower project will significantly cut its crucial water supplies from the Nile River, while Sudan fears it could endanger the safety of its own dams.

Ethiopia says the 6,000-megawatt dam is key to its development and hopes to become Africa’s biggest electricity exporter.