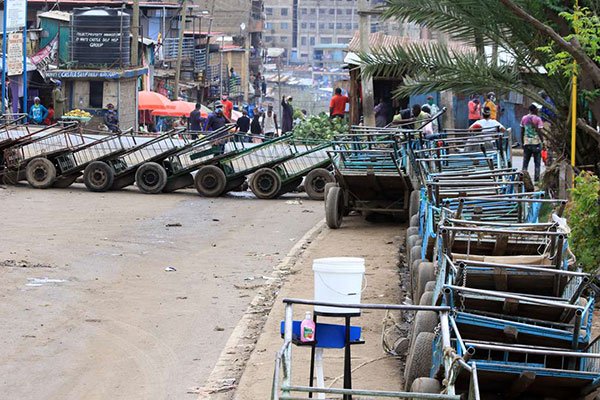 Ridents took to the street yesterday to protest restriction of movement in the area and appealed to the government to provide them with relief food.

They say their livelihoods have been disrupted, leaving them with no means of generating daily income during the 15-day period that the State imposed cessation of movement starting May 6, 2020.

They said they have not reported to their places of work since Friday last week, making it hard for them to provide for their families.

Eastleigh Business Community General Secretary Ahmed Noor pointed out that whereas shop owners are counting losses due to lack of business brought about by the lockdown, it is their employees who are feeling the pinch most since they have nowhere else to gain income.

“As business owners, we can weather the lockdown but what will happen to those who earn a living in Eastleigh such as house helps, car washers, trolley pushers, waiters, security guards and many more who depend on the Eastleigh economy to survive?” posed Mr Noor.

He reckons that targeted mass testing will help in tracing people who work in Eastleigh but live in other parts in Nairobi.

Area MCA Osman Adow also echoed the concern that many people who depend on Eastleigh for their livelihoods risk starvation during the lockdown.

“We are not fighting the lockdown but I think our officers stationed at the various border points should be instructed to allow vehicles ferrying foodstuff in and out of Eastleigh to pass because if they ground them then this will put area residents at risk of starvation,” said Mr Adow.

Even as they called for mass testing, the government last week ruled this out in areas such as Eastleigh and Old Town in Mombasa.

Health Director General Patrick Amoth said targeted testing was only applicable in specific circumstances like when it is not possible to map contacts.

Eastleigh, known for its shopping malls, eateries and a teeming population, has registered more than 67 cases of Covid-19.